There are now many smartwatches with electro-optic hear rate monitors, but based on my short experience so far, if you want something  accurate and reliable, you’d still better use a chest trap. Another potentially more comfortable option would be to use Hexoskin Smart T-shirt, and on top of the usual fitness data (step count, calorie burn, distance and heart rate), also measure your breathing rate and volume. The T-shirt also supports Bluetooth Smart to send back all the data to your smartphone or other devices such as bike computers or smart watches. 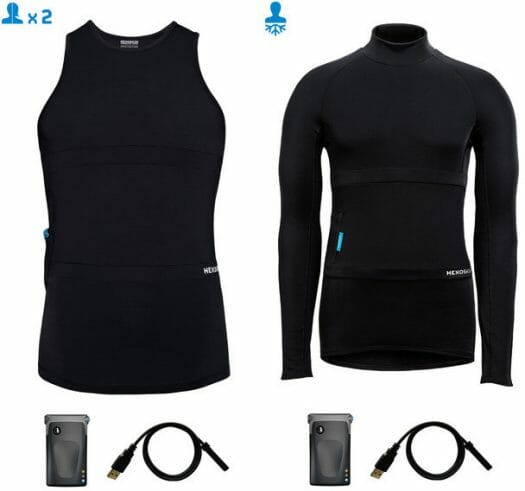 Hexoskin’s sensors gather 42,000 data points per minute to provide an accurate and detailed activity reports, either via the company’s Hexoskin app which displays full cardiac, breathing, and movement data, or third-party apps such as Strava, Runkeeper, Runtastic, Endomondo, and MapMyRun that mostly use the T-shirt as an heart rate monitor.

The data can be seen on real-time on your iOS or Android mobile device, but it is also sent to the company’s server, where it is stored securely. The T-shirt is also compatible with devices such as Tomtom Runner, Suunto Ambit3, Wahoo bike computers, a few Polar devices, and more.

The new Hexoskin Smart T-shirt has now launched on Indiegogo, and has already raised well over its $50,000 funding target. If you already own a previous version of the T-shirt, you can pledge $179 for the new BLE smart device only, while a complete kit with the T-shirt require pledges starting at $299 and greater. You can find more about their previous T-shirt on Hexoskin website.

If you are interested in smart clothing, I’ve also noticed ARM uploaded videos about Li-Ning smart shoes for fitness tracking, and Heddoko Smart Clothing used for body tracking in order to control user interfaces for example.