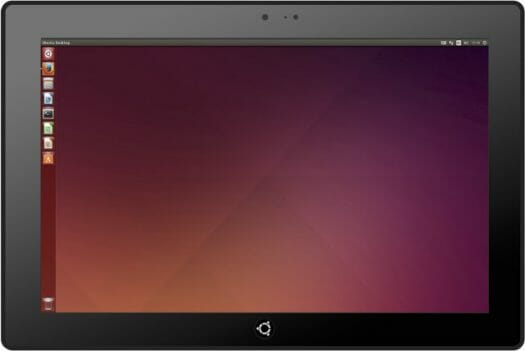 The company claims in a comment on their Facebook post that the tablet runs Ubuntu 16.04 (Xenial Xerus), despite the version only planned for release on April 2016, so that means it’s currently running an Alpha version of the operating system, but there’s a reason for that.

A concern with Bay Trail and Cherry Trail processors is that Intel does not put much efforts into getting Linux to work on these platform so things like audio output (HDMI or ) or wireless connectivity may not work out of the specs, and the product manufacturer would have to work on making it work properly. For example, the first version of Rikomagic MK36S LE mini PC with an Intel Atom x5 processor won’t support HDMI audio.

The company plans to launch the Ubuntu tablets via a crowdfunding campaign that will start on January 18, 2016 with shipping scheduled for June 2016, which explains the Ubuntu 16.04 LTS claim. The tablets are also listed on their website for $349 and $399 for respectively the 8.9″ and 10″ versions, but it’s not possible to pre-order yet.  Bear in mind that there’s no address or telephone number on the company website, and only renders of the tablets are available, but the company is promising “numerous videos” on the crowdfunding page, so hopefully we’ll see some actual demos in the next few days. [Update: There are some pictures if you scroll down on the Facebook, and also a 6 month old video shows the Ubuntu tablet prototype]

There’s also a separate rumor that Canonical will unveil an Ubuntu tablet made by BQ Readers, and allegedly currently codenamed Frieza,  at Mobile World Congress 2016 that will take place on February 22 – 25, but I could not find any actual detail or confirmation about this hardware.

Via Softpedia (Thanks to Nanik)

It’s a quite high end hardware compared to tablets + G Sensor, Compass, Gyroscope and GPS the goodness of smartphones.

Lacks an ethernet port, it’ll could be a full fledged workstation with a ethernet port and why why MJ Tech preloading it with Ubuntu ?

@Arnab
Gigabit via Ethernet via USB 3.0 to Ethernet adapter? Tablets can’t have Ethernet ports due to the size i imagine.

If you want pictures of the actual tablet we have those along with demo video’s on our Facebook page a professional shoot of the tablet is in the works as we speak.

We did consider an Ethernetport but as Fossxplorer brough up the size of the port was an issue.

We have made a few changes to final production last minute after Specs were posted via our website and Facebook page.

Finally Bq Aquaris M10 Ubuntu Edition has been confirmed according to http://www.xataka.com/tablets/bq-nos-prepara-para-el-mwc-presentaran-el-aquaris-x5-plus-y-la-primera-tablet-ubuntu

It will be unveiled at MWC 2016. It’s apparently the same hardware as the Android version (http://www.bq.com/es/aquaris-m10) with a quad core Mediatek MT8163 processor, 2GB RAM, and 16GB storage.

Hi, you also plan to produce a keyboard connectable to the tablet such as WinPad x100?
A keyboard with an integrated battery (and possibly other expansion ports) would be the best.