Qualcomm Snapdragon 410 is the 64-bit ARM processor used in DragonBoard 410c 96Boards platform, but it’s also found in several phones, some single board computers such as Inforce 6309, and we’ve also seen it in system-on-modules includes Graperain G8916 and Intrinsyc Open-Q 410. Variscite has developed their DART-SD410 system-on-module based on the processor with up to 2GB RAM, up to 16GB storage, and on-board 802.11b/g/n WiFi and Bluetooth 4.1. 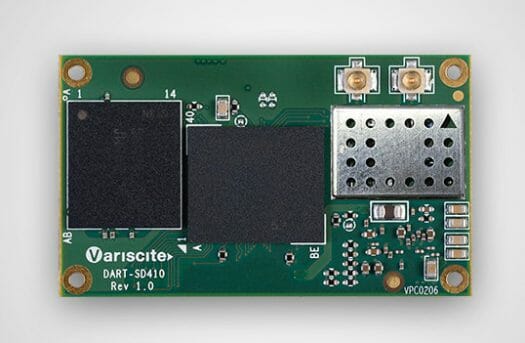 The module supports Ubuntu Linaro and Android  5.1.1, and soon will also support the Yocto Project and Windows 10 IoT. You can find documentation on Variscite DART-SD410 Wiki, and it might also be an advantage that DragonBoard 410c development board is officially supported by Linaro, and has recently become Canonical’s Ubuntu Core ARM64 reference platform.

The company can also provide VAR-SD410CustomBoard carrier board to get started with development as quickly as possible. The baseboard features a Gigabit Ethernet RJ45 port, HDMI output, a micro SD card, RTC and battery slot, two USB 2.0 ports, audio jacks, an edge connector for a camera board (VAR-EXT-CB410), various headers for LVDS, RS-232, GPIOs…, as well as user LED and buttons. Two version of the development kits with the module and baseboard are available with one including a 7″ WVGA capacitive touch screen.

DART-SD410 SoM and development kits are available now with price starting from $57 per unit for 1000 pieces orders. More details can be found on Varisite DART-SD410 and VAR-SD410CustomBoard product pages.