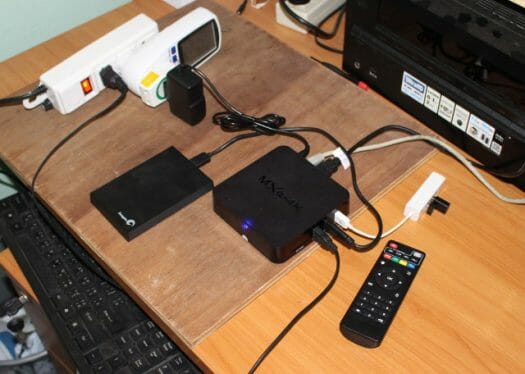 Since the network interfaces of the device are limited to 100M Ethernet and 802.11n WiFi, and some videos are well above 100 Mbps, I’ve decided to test video playback from a USB hard drive instead. I’ve tried the three pre-installed video player apps: Kodi 15.1, “Video”, and “Video Player” , and they all have similar capabilities except Kodi is a little less stable on this device.

I’ve started with 10-bit H.264 videos at 720p and 1080p resolution that no other devices I’ve reviewed could play properly:

That’s 50% success. better than nothing.

Then I switched to some 4K videos:

If you want to get a better idea of the performance, you can watch all those videos played in MXQ-4K below.

I’ve also tested other 4K videos, and most have the same problem. I’ve also tried to switch to 1080p60 video output instead, but the results are only a little better. I’m not exactly sure what may cause the choppiness, and I first thought about memory bandwidth issues, but I’ve noticed the problem is not really constant, and get worse overtime, and very quickly (about one minute), so overheating, or an over sensitive scheduler, may be the reason. My room temperature is around 28 to 30 C so this may affect the results too, since some other people told me they were satisfied with the device.

So video playback is crap like usually on Rockchip.

Something is wrong in the software port for this box. Maybe this ODM stuck an RK3128 build on it since it is upwardly compatible. I don’t understand why this box is shipping with Kitkat while other RK3229 boxes are shipping with Lollipop. Also — I do seem to remember having video trouble with Kitkat on my RK3128 systems. Those problems went away after I switched to Lollipop with a newer (3.10) kernel. Maybe this ODM has used that old kernel that was broken. What kernel is this box running? Of course non-participation by the silicon vendor in software issues always… Read more »

@Jon Smirl
I think RK3229 only supports Kitkat, and I cannot really understand why Rockchip did not provide a Lollipop SDK for this processor. The Linux kernel is version 3.10.0 in my device.

Anyway there’s definitely a problem, and similar to what I got with Zidoo Pro X6. The performance will quickly go south, so they need to look into the software, as I don’t think a Cortex A7 processor should overheat much, even at 1.46 GHz. My Antutu score is only 12,849 points (after boot), while on GeekBuying it’s a little over 20,000.

@Gabe
It’s not like the “micro shutter” issue on other Rockchip processors, and it looks much worse to the end user. It’s just the system can’t sustain performance, even for something that’s supposed to be low power such as video playback.

There is a big bug in Android Kodi that scans complete hard drives and all USB storage devices and cause stuttering.
Here is the bug. On slow devices it cause more problems but on fast devices you won’t notice it that much.
https://github.com/xbmc/xbmc/pull/9250

Just to let everyone know.

You get what you pay for..

If you Google, you can see other vendors shipping Lollipop on RK3229. It is just this vendor using Kitkat.

That’s why I’m suspicious that someone has put the wrong Android onto your box because they don’t want to pay the fee for SDK access.

@Jon Smirl
Just compare title of Alibaba page and chipset specs (hint: RK3229 and S805). On Alibaba you can see many listings like that one.

@Stane1983
+1
Yes, Alibaba doesn’t always have accurate descriptions, at 3 places it is different and even different devices. So for end users it’s not a good idea to buy from Alibaba, rather use Aliexpress and also make sure about the descriptions and buy from a store with high ratings and lots of comments.

Can you post the mediainfo [http://mediaarea.net/en/MediaInfo] dumps for the test clips?

I had problems almost identical to this when running Android 4.4 on the RK3128. Moving onto Android 5.1 fixed everything. I believe the fixes are in the newer kernel, not the actual Android 5.1.

@Jon Smirl
If you check your first link the title is Android 5.1, but further down in the description you’ll find “Android 4.4.4”.
If Rockchip just had a product page and some documentation when releasing a new processor, we would not have to have these kind of discussions/speculations…

Something is messed up here. Rockchip has released Android 5.1 for the RK3128. I have the source code for it and it works fine. You can get the source at the Fireprime site. That source is about a year newer than the Android 4.4 port for the RK3128. But… that Android 4.4 port has been widely distributed and it is easy to find source for it. The RK3129 is just an RK3128 with some moderate changes to the video engine. I have not seen a detailed datasheet but I think this is on the order of clocking the video hardware… Read more »

It looks like it works better when I disconnect the hard drive, and play files from the SAMBA share. It’s still not 100% stable (black screen or reboot), but at least videos are playing smoothly. It must be Android Kitkat MediaScanner that makes things so slow. My hard drive has millions of files, so it might explain why the system is struggling as it is scanning it, even after one or two days…

There’s still a problem with temperature as Antutu scores varies a lot, but I’ll write a separate post about that.

@a k p k
Not sure yet. I need to do more testing. I had problems with stability too.

Testing this box now.. It’s half baked, and not due to the Android version, but more due to the firmware which needs more optimization and correction.. I think. ENY is updated constantly with all the bugs and issues I find, so I hope they’ll do something about it and soon.