A few weeks ago I tried to play 4K videos in MXQ-4K TV box powered by Rockchip RK3229 processor. The device costs only about $30 including shipping, and it would have been if it could indeed play 10-bit H.265 and 10-bit H.264 videos for that price point, but sadly the results were catastrophic, and most of my 4K videos were unwatchable, either playing in slow motion, or with many slow downs and audio cuts. This happens in all players be it Kodi or Androids Video Player with the worst results occurring when playing from USB hard drive with network share video playback being a bit better. But I have now tested another Rockchip RK3229 based TV box – Zidoo X1 II – and the results are much better, so I also decided to show the results of HD audio pass-through over HDMI too. 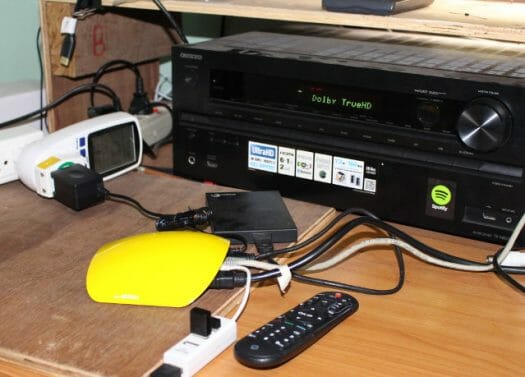 I played the videos from USB hard drive instead using Zidoo Media Center, as Kodi 16.1 (actually ZDMC 16.1) suffered from slow downs and audio cuts from time to time.  The box was connected to Onkyo TX-NR636 AV receiver in turn connected to LG 42UB820T 4K UHD TV with the resolution set to  3840×2160 @ 60 Hz automatically by the box.

No other Android TV boxes are able to play those videos properly (at least using the hardware decoder), so even playing smoothly is progress. The second video most probably cannot play because “16 refs” (ReFrames) are not supported by the hardware decoder. There’s no way to easily confirm that since RK3229 datasheet is not available publicly.

One downside is that there’s no option (that I could find) in the settings to configure automatic frame rate switching. It works in ZDMC (Kodi), but videos are not playing that well possibly due to some background tasks (media scan, add-ons checks…).

How is that possible that Zidoo X1 II handles videos so much better than MXQ-4K? I cheated (sort of). Let me explain. At the beginning, although it was still better than my experience with MXQ-4K TV box, I also had some audio cuts and clearly visible frame drops from time to time, especially in ZDMC, and to a lesser extend when using Zidoo Media Center. But I could remember seeing lots of messages about “W/MediaScanner(  870)” shown with logcat in MXQ-4K, so I decided to see if I could disable it, and I installed media.Re.Scan: app to disable all directories. 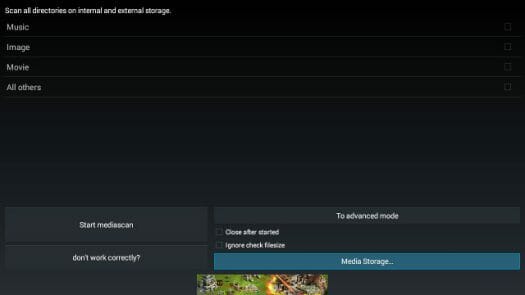 But more importantly then I clicked on Media Storage button, which let me to Media Storage service, which I disabled. I got some warning doing so because this is part of the system, and the service scan all storage to look media files and display them in apps such as the Gallery. You may not actually need to app to do so. 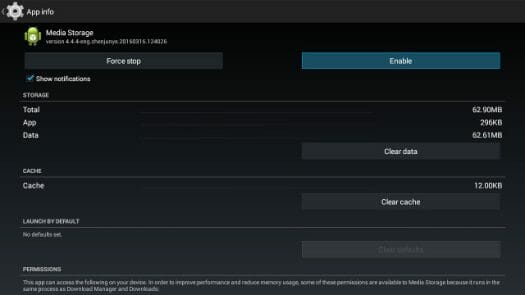 I have not found any side effects for now, and it has greatly improved video playback performance, as I now seldom, if ever, gets audio cuts and/or dropped frames. I have not been able to try this trick in MXQ-4K, as I don’t own the device anymore.

So it’s working well, expect DTS HD HR is not supported, and instead DTS 5.1 is used.

You can see most of the test above in the demo video below.

You can reproduce the tests yourself on your device(s) by downloading the videos available here.

Distributors and resellers interested in this product can purchase it in quantities by contacting Zidoo directly via the product page. Individuals can buy Zidoo X1 II TV box $49 on GeekBuying, Banggood, or Aliexpress.

So basically while they put in a pretty decent video engine, the actual processor is terrible and too slow for almost anything. That’s why some minor background tasks mean it won’t well anymore?

That’s a shame. I wouldn’t mind a more expensive processor if that means it works well. Say the device costs $50-100… but is fast in Kodi and plays everything well… that would still be a great deal. It’s a shame no better company does Hi10P…

Hi, did you use the device with a portable HDD. For some reason, it didn’t work for me. The device seem to not able to properly power up my HDD. Neither did it work with a USB hub. How did you manage to get around it?

@RayoMD
You can see the drive in the first picture. Seagate Expansion 1TB USB 3.0 drive.
I connected it to the horizontal USB port, I have not tried the vertical one with the drive, just keyboard and air mouse.

Ooooo, I’m gonna test on my MXQ box this weekend, ill post back and let you know the results.

@Jean-Luc Aufranc (CNXSoft)
Which box would you recommend to get at this moment? I’m totally confused as there are too many of them and all specced similarly, and none seem to have proper future support.

@Bony
I think I’ll write an article about that soon. Many people are asking.