Shenzhen Xunlong Orange Pi boards are popular with some developers and hobbyists thanks to their low price, but the company is also aware that some are critical of their products. Some of the complaints include that their boards are too difficult to use due to lack of proper firmware and documentation, they are called “Orange Pi”, but aren’t even made with orange color, with some people even going as far as saying their boards are just bricks just good enough to collect dust. The company has taken all remarks into consideration, and has come up with a product that’s simple to use and orange, while breaking the price barrier, as it will be sold for just $1. Yep. You read that right. One Dollar.

I’ve worked with the company to get the exclusive, believe me you won’t find this on any other sites, and they’ve sent me an early sample. Usually packages are not really that interesting, but there was something very peculiar with the package that immediately jumped at me.

That’s a shoe box! So I double checked with the company if they were really going to send Orange Pi Bricks to their customers in such boxes, and Steven, the company’s spokesperson, explained that indeed they’d send their new systems in recycled shoe boxes in order to limit their impact of the environment. Shenzhen Xunlong clearly trumps the competition as an environmentally friendly development board company! 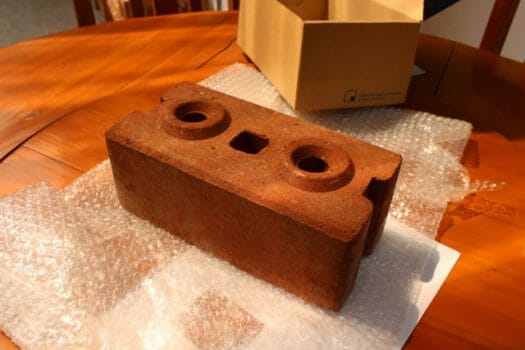 It’s a beautifully crafted orange block with three holes, some sort of Lego brick for adults if you will. It could be used to build a terrific wall, the sort of which you’ve never seen, or it could be laid out in a garden for decoration purpose, but the key selling point is support for Raspberry Pi Zero and other small factor development boards such as NodeMCU, LinkIt Smart 7688, Wemos D1 mini, and others…

The central through hole is perfectly designed to fit such boards. It makes an all-weather rugged enclosure for your electronics, and it’s also perfect for discreet smart walls. The side holes and extrusions are both used to either embed modules or pass wires through, while providing a locking mechanism between bricks that allows for cement-less and modular walls.

The bottom side of Orange Pi Brick has a patent pending Sensor or LockTM cavities to either place your sensors and/or add-on boards or as interlocking mechanism with other Orange Pi Bricks.  I tested the design with Wemos DHT22 temperature and humidity sensor and NavSpark mini GPS module connected to Raspberry Pi Zero board via Dupont cables, and the results was satisfying. The cavities will also provide some heat insulation for the temperature sensor which is always a plus.

So you can be sure that nobody, nobody, and I mean no-bo-dy, is going to mess with a smart wall or project made with Orange Pi Brick, with the only limit being your imagination. I personally the Orange Pi Brick may become so popular that it may end up being simply called “The Brick” in the Maker communities.

I’d like to thank Shenzhen Xunlong for providing an exclusive Orange Pi Brick sample to CNX Software, and for their continuous and relentless commitment to Make Making Ever Greater Yet Again. The company is still making refinements to Orange Pi Brick, and working on a curved version called Orange Pi Brick Round, but both product should eventually find their ways on the company’s Aliexpress store for $1 plus shipping.

Thank you for nice pictures of the gorgeous decent SBC brick.
I love April Fools’ Day.

I clearly call this BS. With specs like that they will never get it CE or FCC certified.

Is that a BAN (brick area network) I see there?

Is this a phone SOC that will be in a future Motorola brick phone?

Meh, ordering site’s down…. Hope they don’t brick the internet!

I’ve just been told they plan to use parts of the new EEVblog lab (https://www.youtube.com/watch?v=KiEMSkVTHmQ) to open an Orange Pi Bricks distribution center in Australia…

Sadly, it will randomly overheat.

Unfortunatly the true is that Shenzhen Xunlong Orange Pi company is a scam, no support, many problems, don’t ever buy anything from them!

@Luc Verhaegen
Yep. It gets pretty hot when exposed to direct sunlight. I hope they’ll find a fix.

Finally – randomly overheating does not violate the GPL!!!

@JotaMG
Xunlong’s hardware is pretty good (does not apply to software, support and ‘communication’ but who cares in the meantime?). At least FriendlyARM’s NanoPi M1 and SinoVoip’s BPi M2+ are 99% clones of Xunlong’s hardware. Can’t wait to see a yellow Banana Brick for twice the price soon to port Armbian onto it! 😉

admit you just wanted to show you have a rpi zero 🙂

@LinAdmin: ah. good one. Wish i had come up with it…

Finally a product that respects your freedom from Shenzhen Xulong!

When will you release the test video ? what about a v2 with sata ?

What is hardware without software??

@JotaMG
What would be Allwinner devices without the great linux-sunxi community? Android toys or bricks, true.

It’s more of a prick ….. according to the person on the packaging.

i hope we’ll soon get a tutorial explaining how to unbrick it..