We’ve already seen 360 degrees cameras with some rather expensive setups with multiple GoPros, as well as more affordable solutions (around $500) such as Gyroptic 360 Camera and ALLIe cameras. Taiwan based Ultracker Technology is now promising a 360 degree camera for around 300 dollars with their US360 model featuring four lenses for up to 1080p30 or 6144×1760 @ 6 fps video recording or live streaming. 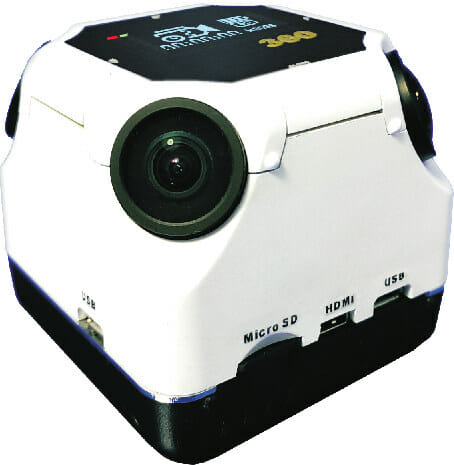 The system is basically headless, but the company apparently decided to run Android inside the device instead of Linux. There’s no mention of GPS support, however camera is also said to support Geotagging compatible with Google PhotoSphere and YouTube 360°. US360 Viewer software is available for Mac OS X, Windows, iOS, and Android, but I could not find any download links.  The camera can be used for recording and live view for CCTV applications, as a dashboard camera, or with a your drone,  and pretty much any use case for action cameras.

Charbax interviewed the company at a recent event where they showcased its capabilities, and controlled it via a tablet over WiFi.

More details, including the mobile app user’s manual, and some video demos on a bicycle and drone, can be found on Ultracker US360 product page. A 4K version is  planned for the end of the year.

I have been waiting for something like this. Maybe a good idea to wait for the 4K version 🙂

Their video on youtube has no particularly remarkable attributes. The “Snoopvision” isn’t enabled, nor any other 3d features that Youtube may offer. I didn’t download their manual, would like to have seen an interactive video though. anyone seen any 3d open source projects? I realize 360 and 3d may not be involved in one product, but a start would be a photosphere pan able video device, and for extra credit 3d thrown in. Depth has long been available on youtube, and isn’t on the video above, FWIW. But on a side note I’d take something that took some number of… Read more »