Update: a defect has been found, so the board is not for sale anymore.

Samsung S5P6818 octa-core Cortex A53 processor has already been found in several single board computers and development boards including Graperain G6818 SBC and NanoPi M3 board, but so far I had not seen it implemented into a system-on-module to be used in custom designs, and that’s just was Boardcon did with their MINI6818 CPU module. 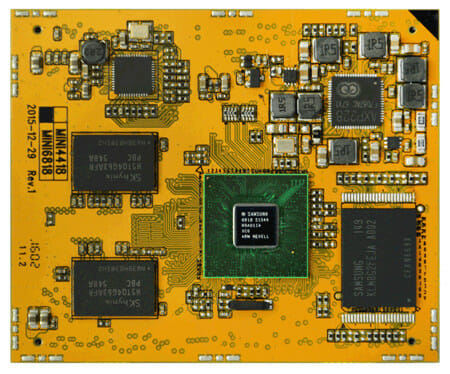 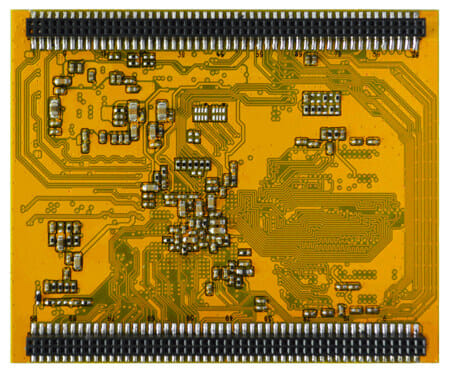 The company provides support for Android 5.1, Linux 3.4.39+ and Uboot 2014.07 on the board, together with all drivers. I’ve been told the Linux implementation is not that good on S5Pxx18 processors though, and there’s no hope of getting mainline kernel, but if the hardware match your requirements, and don’t plan to mess around with the kernel too much, that could still be an option. 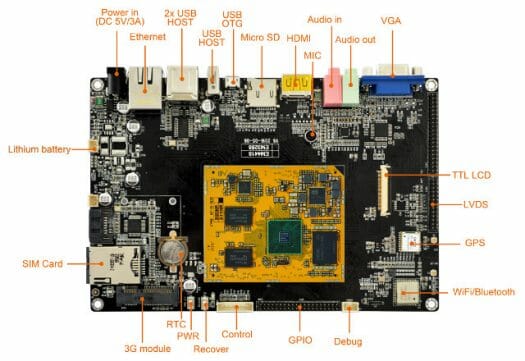 A baseboard can also be used for evaluation with access to all features exposed by the CPU module including Ethernet, USB ports, HDMI, VGA, audio ports, LVDS, TTL LCD, as well as some extra chips for GPS, WiFi, Bluetooth and 3G connectivity. The baseboard is also compatible with the company’s MINI4418 (Samsung S5P4418 quad core Cortex A53) and MINI3288 (Rockchip RK3288) CPU modules

Price has not been released publicly. You may want to visit ARMdesigner MINI6818 page for details.

Boardcon / Armdesigner have null technical support. Their manuals are poorly translated from Chinese to English and worst the enclosed software simply don’t work as shown in the manuals. They only accept emails for support so we have to wait 24 hrs for a vague responses on any issue. We finish sending their product to the warehouse after months trying to make it work.

@Jean-Luc Aufranc (CNXSoft) IMO we should call these SoCs from Nexell not ‘Samsung SoCs’ since while they might originate there software support is completely different (Cortex-A53 with 3.4.39 32-bit kernel smelling like ‘Linux-2.6.28 platform port that was forward-ported’). When people read ‘Samsung’ they think ‘ah, there’s some upstream support going on’ which is definitely not the case here. Not being able to benefit from ARMv8 code on an A53 will lead to serious performance degradations in some areas (see the common sysbench example: 3-4 seconds on ODROID-C2 and Pine64 vs. 45 seconds on RPi 3) and I really doubt these… Read more »

A defect has been found in MINI6818, so they are suspending sales for now.

@George
Boardcon is a solutions company, as far as I know, they only provide technical support for quantity customer, and just offer email support for general consumers.

Mullerbu, when operations don’t move on defects from anyone, they are doing a disservice to all their customers. In fact single users who can quickly act on defects w/o a lot of institutional (and necessary) inertia in the form large programming departments are better to work with as they can resolve problems quickly.

I was not impressed that the link that Jean-luc supplied was useless for the company as well.

@jim stephens
I see, they’ve taken their page down. Actually they asked me to remove the post, but I refused.

It looks like the quad core module is still there, so that’s only an issue with the 8-core module.

It looks like a nice board, hope they fix it. I’m still interested in octa core systems.

Off topic, did you see that several distros are tossing around dropping 32 bit builds. Not sure about base debian, but Ubuntu and SUSI are.

Sort of a monkey wrench for Ubuntu derived cheaper 32 bit SOC’s which use Ubuntu.

This product is 64 bit I’m guessing?

@jim stephens
I think they just plan to drop 32-bit for x86 processors. They won’t drop 32-bit ARM for many years, as so many new devices and processors are launched with that architecture.