FriendlyARM launched NanoPC-T2 single board computer based on Samsung 5P4418 quad core Cortex A9 processor about 3 months ago, and the company has now an update based on Samsung S5P6818 Octa-Core A53 processor with the exact same interfaces and features including Gigabit Ethernet, WiFI, and Bluetooth, HDMI 1.4a, 30-pin expansion headers, etc… 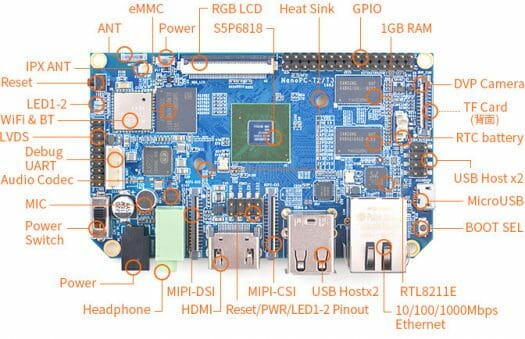 The board can run Android and Debian from eMMC flash or SD card like its predecessor, as well as Ubuntu Core with Qt, and software and hardware documentation can be found on the Wiki. The board ships with the heatsink shown in the top picture.

2GB RAM option is good (really helps with self-hosted development), but eMMC is 8GB only?

@Fossxplorer
I think it’s useful if you have your own modules that use USB signals without actually using a USB port, so you can just wire your module directly to the board.

Not sure about supporting 5 USB drives.

@Fossxplorer
The SoC has only 1 host, 1 OTG and 1 HSIC USB2.0 port and it seems a Genesys Logic USB hub is on the board next to the 2 USB receptacles. So you’ll end up with all 4 USB host ports connected to the one single HSIC port sharing bandwidth. I’ve not seen any octa-core board so far that doesn’t suck regarding I/O bandwidth 🙂

Kernel version 3.4 🙂
Pretty sure there’s no arm64 support there, those a53 will run on 32bit only

@memeka
i don’t trust their wiki for now, it seems to be a copy-paste from other older devices

the hardware looks really nice, the price is okay-ish (2GB ram would have been nice), but i fear the software support/community might be lacking

When will these SBC designers learn Any thing less than four USB ports is unrealistic for practical use among the broad majority of consumers.

What is the obesssion with usb ports here?, who needs them on an embedded controller.

@tkaiser, i see. And thanks for answering a question i was about to ask, but already informed by you. This is very important details most ppl don’t know prior to buying such.
I’ve read many other comments and forum threads by you which enlighten us about the shortcoming of these devices. Really appreciate your effort and time figuring out of such crucial details!

@Jeroen Yeah, especially since the ‘need’ to provide as much USB receptacles as possible leads often to strange design desicions further limiting available bandwidth. Best/worst example is Banana Pi M3: The SoC features 2 real USB host ports and the board has 2 USB type A receptacles. But since the vendor promotes also a SATA port (behind an ultra slow USB-to-SATA bridge limiting disk write performance to 15MB/s!) you end up with only one USB host port used and both disk port and the 2 external USB receptacles connected to this so everything has to share the bandwidth of only… Read more »

no go for me

Hello, can I buy with board NanoPC-T3 board with DDR3 2GB RAM? I know default it’s 1Gb DDR

@HuyLe
I can’t see it on their website, so you may have to talk to FriendlyARM directly to find out how to buy it.

NanoPC-T3 Plus with 2GB RAM is now up for sale for $75 @ http://www.friendlyarm.com/index.php?route=product/product&path=69&product_id=210

Friendlyelec have launched a sheet metal case for the NanoPC-T3 Plus $9.99 + p&p

Does anyone know if HDMI CEC is supported?