Tronsmart Vega S95 Telos is an Android mini PC powered by Amlogic S905 quad core Cortex A53 processor, but contrary to the two other S905 device I previously reviewed, namely K1 Plus and MINI MX, it’s not been designed for the ultra low end, as it comes with 2GB RAM, 16 GB eMMC flash, 802.11ac WiFi, Gigabit Ethernet, and a SATA port. GeekBuying sent me one sample for review, and I’ll start with some pictures of the package, device, and board, before running it through a full test procedure.

I got the box via DHL in the following package with makes it clear it’s a 4K media player. 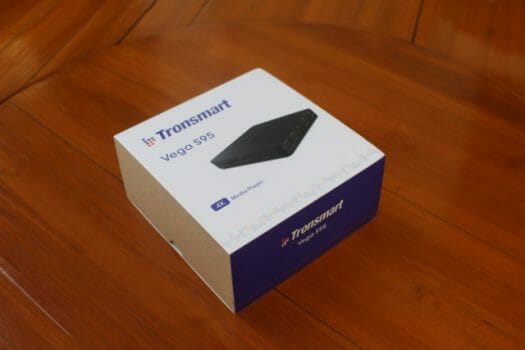 The box comes with a simple IR remote control requiring two AAA batteries, an HDMI cable, a SATA cable for laptop drives, a 12V/2A power supply, and a user’s manual in English.

The device looks somewhat like Beelink MINI MX from the outside, but the connectors’ placements are different.

One side has two USB 2.0 host ports and a full-size SD card slot, while the other side features the SATA connector. The rear panel comes with a power hack, an optical S/PDIF port, Gigabit Ethernet, HDMI 2.0, and another USB 2.0 port.

On the bottom of the  case, you’ll find the Fn pin hole to update the firmware in case OTA updates don’t work, or you need to re-install Android on your device.

That’s the unboxing video. Sorry about the lack of focus at times…

You’ll need a sharp and rigid plastic tool to pop-up the bottom cover by sliding it on the four edges of the case.

We’ll find a “Tronsmart Vega S95” sticker o the board, two Samsung K4B4G1646D-BCMA DDR3 RAM chips (1GB), and a golden button which you press to upgrade the firmware (Fn pinhole). There’s also a sticker with something that looks like a 6 bytes MAC address, and the prefix 20:18:0E looks up Shenzhen Sunchip Technology.

After removing four screws, we can have a better look at the WiFi antenna, and the whole board with the RAM, storage, and Amlogic S905 SoC covered with a metallic shield and an heatsink. The shield is not soldered, so I could remove it quite easily with a small plastic tool.

What about SATA? I’ve been told GL830 USB to SATA bridge is often used in low cost device, and has very poor performance. At least, Tronsmart Vega S95 Telos does not use that part, and instead they went with JMicron JM20329 USB 2.0 to SATA bridge. We’ll have to see how it performs in the review.

I’d like to thanks GeekBuying for sending the sample for review. You could consider purchasing Tronsmart Vega S95 Telos from them for $89.99 when using GRZYOXAC coupon. The device is not listed on many sites, but you can also find it via some sellers on eBay.

Why is the theoretical speeds of the emmc chips never even come close to real life speeds? Is there too much interference, are the controllers not good enough, or did the manufacturer of the chips gave a false rating?

@Oren
There may be some bottlenecks due to the benchmark tool itself, controllers, it’s difficult to say for sure.

I’m postponing the review… waiting for a new firmware, as while my 128 GB SSD is recognized, it will only show 10MB. Same bug as I’ve had on other Amlogic S905 via USB…

cnxsoft :
I’m postponing the review… waiting for a new firmware, as while my 128 GB SSD is recognized, it will only show 10MB. Same bug as I’ve had on other Amlogic S905 via USB…

It shows 10MB on other devices as I’ve seen, but it does make use of all the actual space there. From my experience – as I’m testing the U1 right now with my USB 1.5TB drive connected.

@Oren
Yes, you can access the files on your drive, but I don’t think you can copy or download anything that’s bigger than 10MB.

cnxsoft :
I’m postponing the review… waiting for a new firmware, as while my 128 GB SSD is recognized, it will only show 10MB. Same bug as I’ve had on other Amlogic S905 via USB…

That’s a pitty. I am very interested in in this box and there is a sale on GeekBuying ending the 10th this month. All my media is on a NAS, so I do not have this problem.

Seems this is a common bug on Amlogic SDK, only happened when you use SSD and also more partition on ssd.

We have reported this problem to them, and let’s check who will be the first to fix 🙂

Tronsmart release a new OTA update to telos version first, and you can check if you solve your problem.

Is there anybody who compiled the u-boot tools? So it should be possible to modify U-Boot envs (to boot from SD Card) without open the device (via adb shell; maybe device must be rooted before)?

If not: where are the UART headers to solder cable?

@Stefan
You should try the 4-pin header close to the WiFi module. Locate +5V (or +3.3V) and GND first, usually on the sides, and then try Tx and Rx with the two other pins.

GND is the square contact, next is TX, and then RX

But now i know that there’s no need to open case (Link). Should be possible to set u-boot envs with stock firmware:
dumpsys system_control -b [ set | get ] bootenv [value]

I tried miracast on this box but it doesn’t work!

Does it work on yours?

The Piracy Box Sellers and Youtube Promoters Are Killing Kodi! https://kodi.tv/the-piracy-box-sellers-and-youtube-promoters-are-killing-kodi/
I have ordered a box from a Chinese reseller, http://www.tinydeal.com/tronfy-px347wp-p-154403.html

Actually I am wondering if these boxes will support some gray addons any more. any idea

@Jean-Luc Aufranc (CNXSoft)
thanks a lot, got your idea.

Hello and thanks for this post. I wonder if you noted, during your breakdown, if there is a connector on the board for a serial monitor? I would like to be able to see and log boot time kernel messages like I have on my old Minix Neo X5. Thanks

@David
The serial console can most likely be access via the 4 through holes close to the WiFi module.

@Jean-Luc Aufranc (CNXSoft)
Thanks. So there is no pin block? I would have to do some soldering? Rats! Not my forte. I am ham-handed enough that I would likely wreck the device.

I hope someone here can help. I have been trying hard to use my Telos box for months. It has tons of problems in the firmware – but I think the hardware is basically ok. I have worked around some of the problems by using firmware for the Ugoos AM1 although this does not support the built-in SATA connector. I have also tried firmware from the Minix U1 in addition to stock. However, under all of these, I find that apps and their entire process trees are being killed as soon at they leave the foreground. An easy test to… Read more »