Thanks to CNX for helping me get a hand on the 96Boards compliant Mediatek X20 board that was generously donated by Seeed Studio. In this article, I will walk through the steps to get the board up and running and also compile Android from the source code. The current Android is version 6.

The board boots up from the eMMC, and the first time you boot up you will get Android screen as shown in Figure-9. This is the default Android image from the factory, which surprisingly looks like it was setup for a phone screen mode, which is not sufficient for a HDMI monitor. It would be better to install the images that are made available at Linaro website or build your own. See the other section to flash the board with different images.

Flashing image files are done using fastboot tool in bootloader mode. There are 2 ways to switch to bootloader mode. To prepare the board to be flashed it will need pin 3 (USB Host Set) located at the back of the board as shown in Figure-11 to be set to OFF

The first method requires that you boot your board into Android. Power the board and let it boot to Android. Once it boots to Android you can switch to bootloader mode by typing

The 2nd method require the xflash tool which can be downloaded from the following link http://builds.96boards.org/releases/helio-x20/mediatek/aosp/16.10/mediatek-x20-aosp-16.10.tar.xz. Unzip the file and you will see something like Figure-12.

Extract xflash.tar.gz and you will see something like Figure-13.

Unplug the power supply, and plug your computer USB cable to the micro USB cable of the board and run the xflash tool as follow

The location of MT6797_Android_scatter.txt can be found inside the <your_unzip_mediatek>/Images/Normal Image/ as shown in Figure-14

Power up your board after running the xflash tool. You will see print out on the screen as shown below.

Once you see the text ‘END’ the board has been switched to bootloader mode, and is ready to be flashed.

You know that you are in bootloader mode, once you get a reply like the following

You can either flash using the image files provided by Linaro or build your own custom image. You can download a ready made image file from http://builds.96boards.org/releases/helio-x20/mediatek/aosp/16.10/mediatek-x20-aosp-16.10.tar.xz (the image file are inside the <directory>/Images/Normal Image).

Copy all the different files inside /Normal Image and /Special Image to a separate folder and flash the files using the fastboot command as follows:

Android 6.0 is supported on the X20 board. Use the following command to checkout the AOSP source code

Copy the contents of device/, prebuilts/ and vendor/ into the AOSP directory. After completing the copy steps follow the steps below to start compiling

Once the build process is complete, you will see list of files as shown in Figure-18.

The image files are now ready to be flashed to the board. Use the same flashboot commands as above to flash the new compiled image.

I’ll complete this guide by showing the info provided by CPU-Z and Antutu benchmark for the board for people wanting such details. 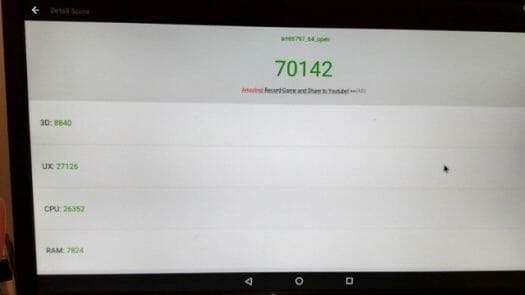 If you’re interested in the board, you can purchase it for $199 plus shipping on Seeed Studio.