Last spring, I wrote about MatchX.io MatchBox LoRaWAN gateway with GPS, WiFi, and Ethernet connectivity. The gateway is equipped based on a Mediatek WiFi module running Linux (OpenWrt/LEDE), Semtech chips for the LoRa part, and support up to 65,535 nodes, such as the as well as MatchStick, MatchModule, and MatchCore sensors provided by the company.

I’ve just received MatchBox gateway for review, but I’m still waiting for 920-925MHz LoRa nodes as they are going through the FCC certification process, and I also have to wait for clarifications regarding local regulations. So in the meantime, I’ll check out the gateway hardware. 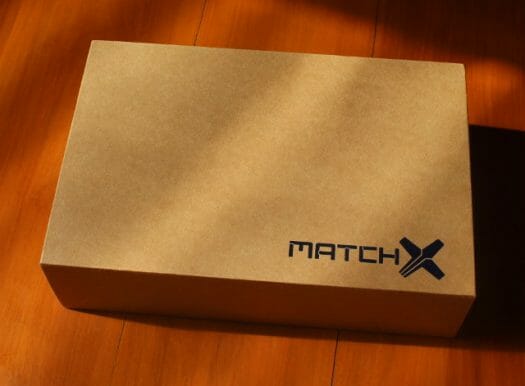 The gateway is shipped with a power supply, power cord, two antennas, an installation guide,…

as well as three screws and pegs to wall mount the gateway and power supply, and in case you want to install the gateway on a pole, as shown below, for greater range (up to 20km LOS), a clamping collar is also provided. 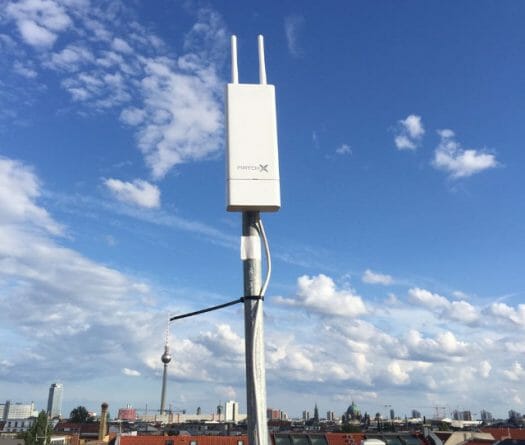 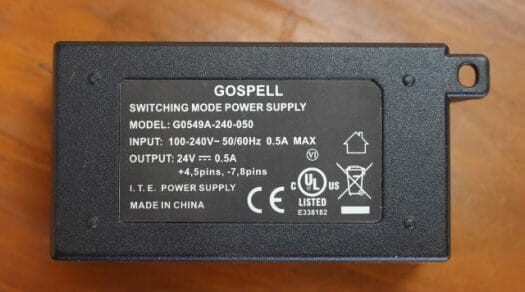 One end of the router includes two antenna connects for GPS and LoRa.

On the picture above, we can see the model (MX1702) has FCC certification, and since the company is based in Berlin (hence the photo with the television tower above), CE certification has also been passed, but another model number (MX1701) is used due to the different frequencies.

The other end of the gateway has a cover revealing the PoE port, a USB 2.0 port for storage, a USB type C port for debugging, and a Link LED. Installation is easy, as you just to plug a standard Ethernet cable – although a shielded one is recommended – into the PoE ports of the gateway and the power supply.

Put back the cover to protect the ports of the gateway from elements and insects. You could also use another Ethernet cable to connect the gateway to your router, but using WiFi is also possible.

At this stage, I normally open the device to check out the hardware design, but an enclosed letter asked me not to because the enclosure of rated IP65 and ultrasonically welded to it may not be waterproof anymore after I reassemble it. 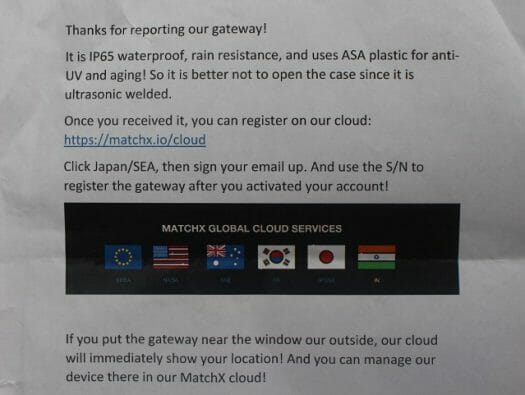 The letter also explains how to register the gateway with its serial number at https://matchx.io/cloud using the cloud services in Europe,  North America, Oceania, Korea, Japan/SEA (South East Asia), or India, so the service is basically available worldwide, provided your country allows it.

So instead of tearing it down myself, I asked the company to send some high-resolution photos of the board.

A Hi-Link HLK-7688A module is used on the board for WiFi with two u.FL antenna connectors (ANT4 and ANT3), and a PCB antenna. That module should be based on MediaTek MT7688A MIPS processor, but MatchX reports the processor is actually MT7628A. Both SoCs are very similar, but the latter supports 2×2 MIMO.

LoRa circuitry is then connected to ANT2 u.FL connector.

On the other side of the board, the most notable part is Ublox MAX-7Q GNSS module supporting GPS/QZSS, GLONASS, and connected to ANT1 antenna connector.

im really interested in LoRa ,What will u use is for ?

@bantoto masabo sigola
I’ll just use it for testing mostly. Once I get a sensor, I may use it to track my car.
I don’t know yet if it is legal to setup my own gateway without specific licenses where I live.

So does this thing come with a ball-and-chain “Cloud” connection requirement? If I can’t run a complete stand alone network, then I have no use for this. Are there any never-ending license and/or maintenance fees? Those are deal-killers too.

@Drone
This gateway comes with a free Cloud server from MatchX but you are also free to use any other server compatible with LoRaWAN specification. There are many available, you can also set up your own server on your lockal machine if you like, there are some open source lorawan servers out there, so after buying the gateway you are free to do everything you like and you dont have to relay on anyone and pay no fees.

@Jean-Luc Aufranc (CNXSoft)
The gateway works in ISM band so I am pretty shure you don’t need any specific licenses.

@Piotr I got my info. I don’t need license as long as I keep EIRP below 500 mW. Source: http://www.ratchakitcha.soc.go.th/DATA/PDF/2560/E/289/47.PDF I found it hard to read, so somebody kindly provided a summary: paragraph 5 : for 920-925MHz non-RFID radio equipment (1) max EIRP not more than 4 watts (2) if EIRP < 50mW, need no any license (3) if EIRP < 500mW, need license for import, selling, and making you own equipment (4) must be in accordance with NBTC technical standard. (5) must not interfere with any licensed application. Interfering equipment must be refrained from any usage. So to be… Read more »

@Jean-Luc Aufranc (CNXSoft)
If the gateway is only receiving messages from sensors, you could disable entirely the transmitting part, and do not have to care about TX power regulations at all.

In the near future, it should be possible to take 4 RTL-SDR dongles, hook them to a linux board running armbian, and decode the messages in real time.

I have tried this one my PC and worked on my own docker image for this one:

@zoobab
I’ll have to study if I can disable transmission from the gateway, or at least limit Tx power.
I’ll also have to reduce the LoRa node power I use to 50 mW.

@Jean-Luc Aufranc (CNXSoft)
Actually I see Matchstick is limited to 17 dB (~50 mW) so that should be OK if that’s what I’ll receive.
The gateway can output up to 30 dB (1 Watt) so I’ll definitely have to look into this.

The link for the “MatchBox User Guide” sends me to an ownCloud page that seems to be hosted from cnx-software[dot]com server (somewhere) that requires me to unblock scripting. Then if I allow scripting for the site I get an embedded .pdf viewer app which downloads the whole .pdf but doesn’t display in the browser unless I wait a loooong time (for me anyway, I’m using latest Firefox 52.5.0 (32-bit) with up to date JRE). For anyone else that doesn’t want to go through this, here’s the direct download link for the .pdf, which displays fine locally for me after download:… Read more »

@Drone
OK. I simply used the link ownCloud provided when I selected “share”. But anyway, I’ve updated the link to direct download.

@Jean-Luc Aufranc (CNXSoft)
All is good. Direct download works now. I just tested in Firefox 57.0.1 for Linux with uMatrix v1.1.12 add-on. Thanks 🙂