While there are plenty of low power x86 mini PCs running Windows 10, and although in most case it’s always possible to install a Linux distributions yourself, it’s much more difficult to find products that ships with Linux by default.

Launched a few years ago, MintBox Mini and MintBox Mini Pro mini PCs are such options being powered by AMD A4 Micro-6400T and AMD A10 Micro-6700T processor respectively, and running Linux Mint. The Mint team has now announced upgraded versions with MiniBox Mint 2 and MiniBox Mini 2 Pro, both based on Intel Celeron J3455 quad core Apollo Lake processor, and just differing by the amount of memory and storage.

Just like the previous model, they collaborated with Compulab for the hardware, and went with a design based on Fitlet2 fanless mini PC with the following specifications:

The CPU performance should be quite better than the Mintbox Mini and Mini Pro mini PCs based on the GeekBench 4 scores published below, but graphics performance may be a little lower than on the previous generation Mini Pro (Radeon R6). 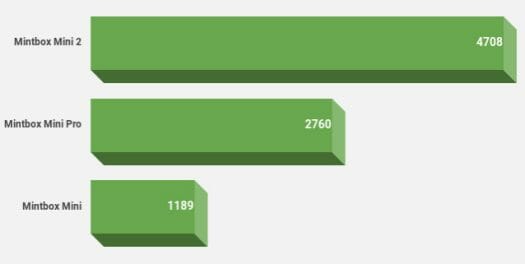 The new Mintbox Mini 2 / Mini 2 Pro mini PCs will become available in June 2018 around the time of Linux Mint 19 “Tara” release, and sell for respectively $299 and $349. More technical details & features can be found on the product page.

*yawn* wake me up when it will be arm based 😀

Nothing can wake you up …

This is in-fact the CompuLab Fitlet2 which currently goes for around $175 USD as a bare-bone with the J3455 on-board. So if you add the memory, SSD etc. yourself you get to around the $299/$349 price anyway, and any extra is probably going to the Linux Mint effort, which is a good thing IMO. Yes, the CompuLab devices are over-priced IMO, but the hardware is supposedly industrial scale. There is a VESA mount available for the Filet2. The PROBLEM with this offering is the included 64GB/120GB M.2 SSD, which is too small IMO, and you probably can’t remove it in… Read more »

Which place (other than Iran, N. Korea Etc) puts barriers on importing from Israel?

In my experience, Indonesia.

Yeah, i’d definitely have supported the Linux Mint team had i had a use case for such a box. They are doing a fantastic job with Cinnamon DE, which i use with RHEL/CentOS 7. It’s my favorite DE on desktop (otherwise LXDE on laptop, XFCE on other ARM boxes + VNC sessions)