SinoVoIP has really been busy for products launches this month, as Banana Pi BPI-W2 is the fourth board they’ve started selling on Aliexpress.

The board is designed for media, storage, and networking application, thanks to its Realtek RTD1296 quad core processor combined with 2GB RAM, dual Gigabit Ethernet, dual SATA interfaces, M.2 slots, USB 3.0/2.0 ports, HDMI 2.0a output and input, and more. 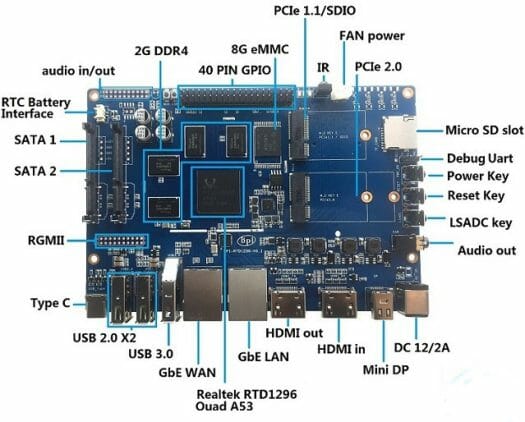 Banana Pi BPI-W2 specifications have not changed since the early announcement last fall: 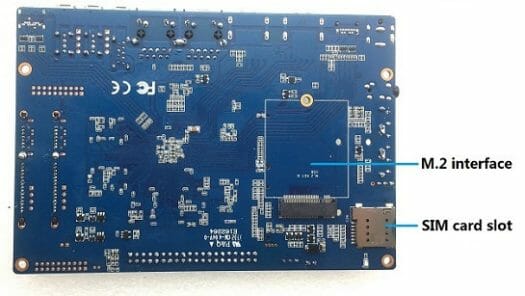 Documentation is mostly in the same stage as it was last September, so not very complete, and some of the features of the boards like USB type C and M.2 slots are not fully documented. They did upload some excerpts from the datasheets listing the registers for SATA, PCIe, USB, etc…

Android 6.0 and 7.0 are supported, and the company has shown screenshot of Centos 64-bit, Debian 9, Raspbian, and Ubuntu MATE 16.04 running on the board with Linux 4.1.35. But again this was information provided last time, and maybe they have already updated to Linux 4.9 as they claimed they’d do. It’s hard to know because so far, they’ve not released any firmware images, no SDK.

If you enjoy a challenge, and some potential frustration, BPI-W2 board can be purchased for $93 + shipping on Aliexpress ($100.79 in total to the US).

> Banana Pi BPI-W2 specifications have not changed since the early announcement last fall Of course the hardware has changed in the meantime but their brain damaged copy&paste monkey responsible for ‘technical documentation’ does not feel the need to provide correct information as usual. Now it’s only one USB2 receptacle and the other USB2 port is available somewhere else (‘keep other USB port with PIN define dear 40 PIN GPIO’). If you follow this refreshing piece of random nonsense (Cortex-A5!) you would need to click on the link at the bottom to get some more hopefully correct details about the… Read more »

No Github repo with bootloader and kernel sources and the BLOBs they use indicate they’re still on a refreshing kernel version: https://github.com/BPI-SINOVOIP/BPI-files/blob/master/others/for-bpi-tools/conf/board/bpi-w2.conf#L61

“If you enjoy a challenge, and some potential frustration”

nobody can stop BPI.

Well, they stop themselves already pretty impressive. Their moderator posting as ‘sinovoip bpi team’ in their forum (most probably the same person responsible for their ‘technical documentation’) is even too dumb to provide correct links to their own shop on Aliexpress: http://forum.banana-pi.org/t/banana-pi-bpi-w2-realtek-rtd1296-open-source-router-public-sale/5402 (using https://www.aliexpress.com/snapshot/0.html?spm=a2g0s.9042311.0.0.ItvOxP&orderId=91167413433502&productId=32862157238 at the time of this writing). On the other hand… why should anyone visit the store page? For whatever reasons they started to sell a new hardware revision of this W2 thingy few days ago but on Aliexpress both description and pictures show the prototype from last year that differs significantly. I ask myself since years… Read more »

sorry, Banana PI R2 was my last sinovoip board – they can only promise, but everything is wrong always …
there’e none 100% usable OS for board exist

LOL
I also have some dust collecting a BPI board…..
(more dust than board by now I guess)

Same here , I have a useless BPi A20 router broad, gathering dust. (First version with the wrong sata power supply, designed by a monkey).
Wont ever buy a Sinovoip product, at least until they get their kernel, u-boot working and documentation sorted for the given board.
Same goes for the clowns at Xunlong.

> First version with the wrong sata power supply, designed by a monkey Has there ever been a new hardware revision? I thought they still sell the R1 fail unmodified since 2014? I own an R1 bought in Feb 2015 but after skipping the crappy Micro USB connector for DC-IN (using the battery connector) and switching on the SATA power pin by u-boot at least as a ‘slow NAS with integrated switch’ the hardware works. Of course SinoVoip forced community to reverse engineer everything by neither providing any correct information nor releasing schematics (took them a whole year to release!).… Read more »

Orange Pi R2 board with Realtek RTD1296 processor is coming later this week for $79.
See 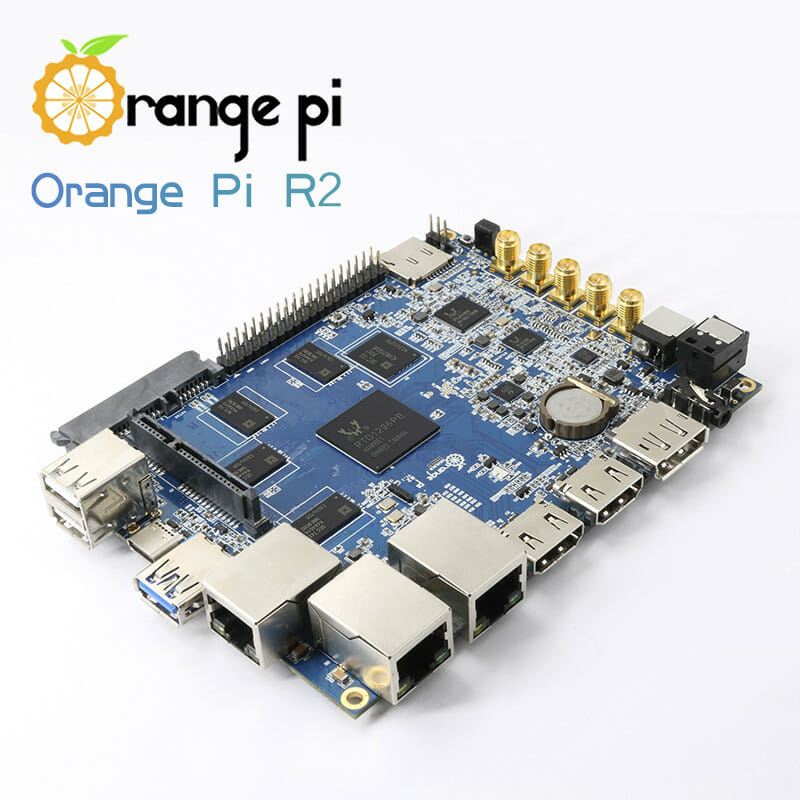 Do you have a picture of the bottom side too?

Nothing much on the bottom side. 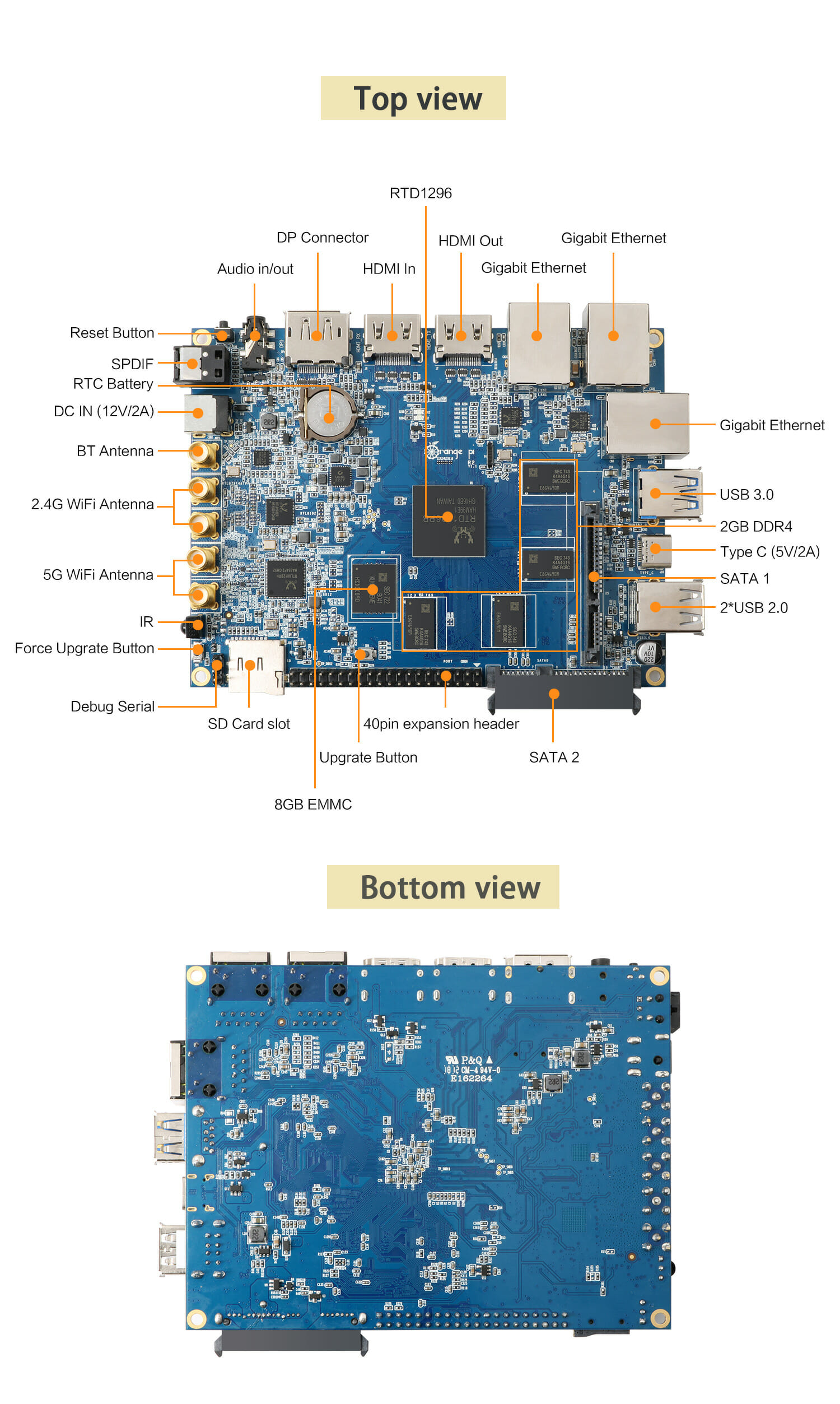 Thank you. Obviously none of the PCIe lanes exposed… and of course the most interesting question remains: What about software support?

Why should this happen? I don’t think this SoC will ever be supported by mainline kernel and first step to touch RealTek’s provided BSP would be this https://forum.armbian.com/topic/7376-banana-pi-bpi-w2/?do=findComment&comment=62270 (which takes days or even weeks)

Did you ever see more information about this Orange Pi R2?

I guess they canceled it for whatever reason.

Is 12V only needed for SATA? Can the board also run on 5V?

Banana Pi usually does not even know the specs of their own products. HDMI output supports 2.0a, simply because the processor supports it, and they’d have had to specifically nerf HDMI output to bring it down to version 1.4.