Last month, Allwinner unveiled A40 and A60 industrial and military grade processors leveraging IP blocks from the old-but-popular Allwinner A20 dual core processor.

This is good news for software support, as A40 and A60 should hopefully become supported in U-boot and the Linux kernel without too many efforts, as well as for companies or makers requiring wider temperature ranges in their products. However, those new processors were not pin-to-pin compatible with Allwinner A20, so a PCB redesign would be required. 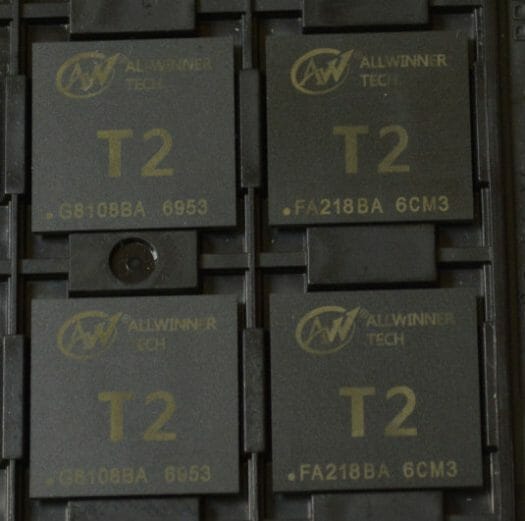 That’s where Allwinner T2 comes into play, as reported by Olimex, it is a rebranded Allwinner A20 dual core Cortex A7 processor with an industrial temperature range (-40 to +85 °C) that makes it suitable for automotive infotainment.

I actually covered Allwinner T2 back in 2015, but at the time Allwinner did not mention anything about temperature range, and SATA support – found in A20 – was not shows in any of the documents.  The latest T2 block diagram clearly features the interface however, and all the ones found in A20. 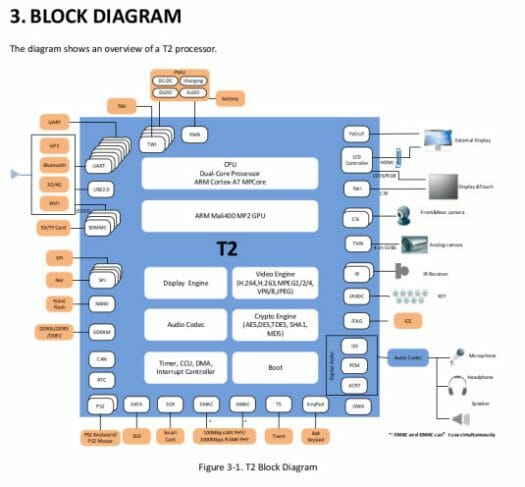 So Allwinner T2 should be pin-to-pin compatible with Allwinner A20, and Olimex has already assembled A20-OLinuXino-LIME, A20-OLinuXino-LIME2, A20-OLinuXino-MICRO and A20-SOM with T2 SoC to test hardware and software compatibility, and once everything is confirmed to work they’ll sell industrial version of their boards with -40 to +85 °C temperature range.

But it turns out Olimex is not the only company interested in T2 processor, and Haoyu Electronics – aka hotmcu – is already taking orders for their MarsBoard CM-T2 industrial grade module, where they simply replaced A10/A20 processor by T2.

Lol good point! Maybe it’s just a photoshop, but it does not look like it.

BTW: First sentence on their product page reads ‘Allwinner T2 is completely compatible with Allwinner T2, T2 is more focused on industrial application, contrary to Allwinner T2 which targets consumer devices such as tablets and TV boxes.’ — thank you, no more questions.