Samsung (Nexell) S5P4418 & S5P6818 quad/octa core Cortex A9 processors used to have dismal Linux support with a very old & unsecure Linux 3.4 kernel, but in the last year or so software support has greatly improved, likely because those processors are used in some Samsung Artik IoT modules.

FriendlyELEC has been manufacturing several S5P boards starting from their NanoPi2 board launched in 2015, and more recently they introduced NanoPi Fire2A & Fire3 boards based on S5P4418 & S5P6818 processor respectively. But this month, they’ve launched two more S5P platforms, and today I’ll look at Core4418 board, which has a lower profile than any of their previous board since the RJ45 Ethernet jack and USB type A ports are not included. 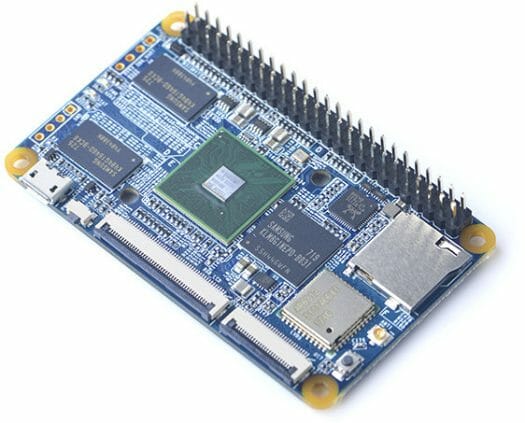 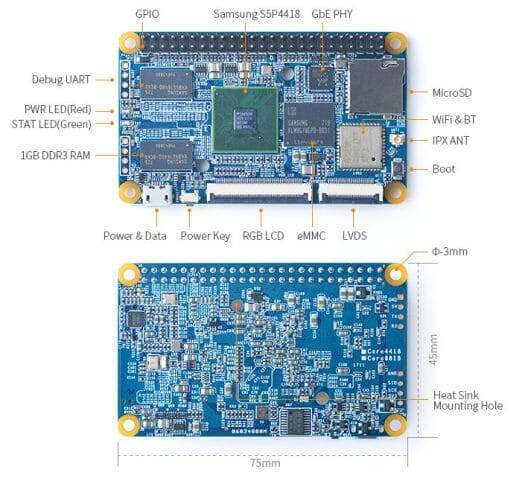 The board should be good if you have limited space for your project, or need some flexibility in the design.  The DVP camera interface usually found on other FriendlyELEC S5P boards is however gone. The company provides Lubuntu desktop and Ubuntu core based FriendlyCore  firmware images for the board. I could not find a Wiki for Core4418, but the instructions and software for Smart4418 CPU module – which I’ll cover in a separate post – should be compatible, and firmware images are actually the ones provided for NanoPi2 board.

Core4412 can be purchased together with is heatsink for $45 on FriendELEC store, where you’ll also find optional 4.3″ and 7″ touchscreen displays, and other accessories. 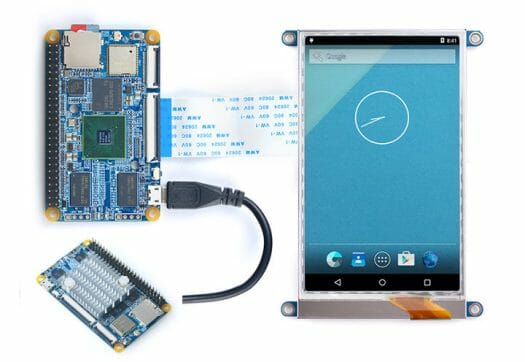 That said it could make some sense to wait for a ‘Core6818’ instead since with appropriate cooling the S5P6818 (octa-core A53 with ARMv8 Crypto Extensions) performs really great, especially with network and crypto workloads. But most probably these ‘Core’ boards are not meant for this use case anyway…

This is almost perfect for a network MITM device. Now if I could just have one more GbE interface! :crying:

Does anyone know of an inexpensive (2+1)-port managed GbE switch? If I could wire one port to this device’s GbE header, and have two others available, that would be all I need!

Netgear’s GS305 is nice. It has 5 GigE ports, is “configurable” (not web manageable), in that it comes with a tool to adjust a few settings on it like VLANs, and is very inexpensive. I have one on my desk to strip the local VLAN. I suspect you could even fit the board inside 😉

Which, while I can’t actually *see* the SMI connectors on the board, is almost perfect. If indeed it IS manageable, that would be awesome. It still surprises me that a switch with so few ports actually has to be so big . . .

According to tkaiser’s theory of “shitness”, this board should be garbage, thanks to the microUSB power input.
Unless his theory only applies to Bananapi products….

Well…I might give him a bit o’ slack there. The theory definitely applies to BananaPI products. X-D

If it’s got alternate power rails input so I can feed the 5v in alternatively, it’s decent. The MicroUSB is something so the average person can power it sensibly.

It’s not a ‘theory’, it’s a real problem especially from a ‘user support’ point of view (since average users aren’t aware of powering problems and consider everything strange happening on their boards being software problems while it’s just plain underpowering due to Micro USB encouraging users to do it wrong) The problems are as follows: 1) Average users have no idea about powering. They only care about amperage ratings, look at their PSU and think everything’s fine when numbers match. Board manufacturers that behave like morons add to this problem (check BPi ‘technical documentation’ where they tell users that ‘everything… Read more »

Ever used that Android which is shipping with NanoPi Fire3?
All that boards are completly useless if Softwaresupport is lacking.
I tryed that Linux Version too… not really usable…

I use the board on Shell… but… the Softwarepart is the baddest issue of all that great boards.
Armbian Development is little slow on that boards too…

Hi, Chris, What do you want on NanoPi Fire3? We have Ubuntu Core, Lubuntu, and Android, All system have the GPU/VPU accelerating, and can use OpenGL, with 4.x linux kernel and complete device driver. And all the system use standard interface.

P.S Fire3 has no eMMC on board. Where do you get that Android by default? And the reason we pre-install Android on most of board, just because it’s small and can do full-feature testing easily. We can pre-install ubuntu core and Lubuntu too if someone need it, just tell us before ordering.

Thanks for your suggestion.

Hi, why i have 96% Load on Windowmovement on Lubuntu? Where are the Closebutons on Android (white square). Why i can’t play Youtubevideos on Lubuntu? If everything is accelerated, why windowmovement is like slomotionrubber, why video is stuttering and flickering? Would like to know how i get a modern Octacore board to play videos accelerated within Browserwindow.
Thank you. Btw. have a look at “RemixOS”… just to be inspired…

Unfortunately, the Lubuntu Desktop has no VPU accelerating, only supported in Ubuntu Core(OpenGL with Qt-5.9.x, and VPU with GstStream), I think RemixOS wouldn’t support that if no driver for X-window/Wayland. To play Youtube, Android is better choice.

What didn’t you find usable ? What I like on this board is that contrary to its older brother the NanoPi M3, it comes with up to date software that works pretty well and is rather complete. I even managed to test opencl for the first time on it, just because I was curious about it and it worked out of the box! I really suspect you’re confusing with the older images based on kernel 3.4 which were not very reliable (esp regarding wifi and ethernet). I must say I’m very happy with my Fire3 and am still thinking about… Read more »

Just try to close Apps. Use the white square… repeat it some times. In my case Close X are missing. Maybe just have a look at “RemixOS”…

You must be confusing something. FriendlyELEC is one of the few board makers who actually do care about software support and provide working/great OS images.

So crazy, if i use the actual Lubuntu Desktop Image i have Windowmoving like Slowmotion-Rubber! If i run top i have 96% Load on Windowmoving. (Nanopi Fire3).

This is a common issue with the chosen window compositor, a usually fix for this typical issue: “Moving windows on screen is slow”

Install Metacity instead of OpenBox

I don’t know what FriendlyELEC cares about, but after spending close to 100EUR (incl. shipping and taxes) on NanoPi 2 Fire and PSU Onecom I can’t say I’m happy with it… I don’t know if I just got a defective one or all are the same, but mine won’t resist two days without a kernel panic (while idle with just power and network connected). No matter the image I’m using (and tried over a dozen of them), micro SD card (from 8GB to 64GB and from at least five major manufacturers), the software I’m writing the image with (etcher, win32… Read more »

> will either get stuck during boot, or go into an endless panic&reboot loop

Totally agree! That’s why I’ve also got the PSU from FE…
But, again, when you get the same results with 3 power sources that can deliver 5.3V-5.4V/2.5A-3.2A (measured) via barrel plug to PSU Onecom, and with a plethora of charger + Micro USB cable combos, you start to doubt it’s your power supply the one to blame.
Let’s not forget that FriendlyELEC marketed the board as 5V/2A via MicroUSB, not 6V, not 7V, not 9V via PSU Onecom or GPIO.

Hi petty,
I am sorry to hear that, Maybe you got a old version, The power controlling was not so good. That’s the SoC manufacture recommended way. We have improved that developed by ourselves(So now it’s named NanoPi Fire2A/Fire3). You can email to me about this ([email protected]). Thank you.

Hi, at first I should give you special thanks to these data about core 4418. I am a little new here. I have some Question:
1 – What is “, RTC battery in”? Is it mean the RTC module is on this board and just need the battery?
2 – Is “power signals” means power jack on GPIO pins?
and the last one is:
3 – Could this core connect to Camera?

Hi, Haniyeh,
The RTC battery input and power input signal is located in the GPIO-50pin, No camera input in this board. But it has two kinds of display/LCD interface, This board is for cutomizing industrial HMI applications.