This week-end, I played with ANAVI Light Controller, an open source hardware solution based on ESP8266 used control 12V RGB LED strips. The board has the advantage of being open source with KiCad schematics, Arduino firmware, and HTML5 server program available, so easy to get started and modify the features as you see fit, and it also supports external I2C sensors via three headers.

That’s a low volume project made in Eastern Europe and as a result the board costs $25, so I was shortly made aware there were cheaper solution, and if you are ready to mess around a little bit, H801 WiFi controller appears to be one of the most interesting solution as it sells for under $10 shipped on Aliexpress or eBay, and is officially supported by Sonoff-Tasmota open source firmware. 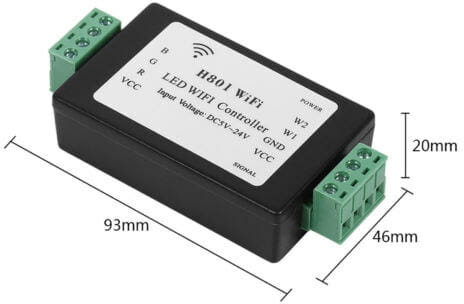 The company provides an Android app (LEDDimmer.apk) to control H801 with various effects, and  several phones can access it simultaneously.

If you prefer open source solution, then you’ll need to open the case by loosening the four screws on the bottom, and flash Sonoff-Tasmota over the UART connection.

This may not be without some small challenges however, as noted in the Wiki, Tx is connected to GPIO 3 instead of GPIO 1 in most other hardware, so you’ll have to run some command to switch to this mode. Some of H801 boards are (were?) sold with only 512KB, which won’t be enough for the default Sonoff-Tasmota firmware, but you can still compile your own by removing some features and it will fit into the flash.

Some people have also implemented a Python plugin to integrate H801 + Sonoff-Tasmota with Domoticz. There’s been quite a lot of activity around H801, and you’ll find other open source firmware such as “MQTT firmware for H801” or ESPurna among others.

The product is made by Huacanxing,  a manufacturer based in Shenzhen, China.

I have two of these controllers, one being a 512kB flash version, and they work pretty well! I’m completely happy with the functionality (especially now that I have flashed Tasmota on them!). I just hate the stupid way that they did the connectors! They have 5 channels for powering lights, being RGB-W-WW, and have 8 pins in their connectors. Why could they not simply do a 6-pin connector on one side (RGB-W-WW-Vcc), and a 2-pin connector on the other side (Vcc, Ground)? As it is, my RGB-W strip is wired to both connectors, and disconnecting only the supply connectors is… Read more »

For the supply connector, it would be possible to use a female DC jack adapter like the ones at https://www.ebay.com/itm/Power-Connector-to-BNC-DC-2-1-x-5-5mm-Male-Female-Jack-Video-Balun-Adapter-LOT-/323062430496
Just make a permanent connection between the terminals, and use the female jack with a standard power supply. Not ideal, but it should do.