Last August, Qualcomm unveiled Snapdragon 670 processor with performance and efficiency Kryo 360 cores believed to be based on Cortex-A75 and Cortex-A55 cores, but the company has just announced an update with Snapdragon 675 mobile platform powered by Kryo 460 cores which are based on Arm Cortex-A76  according to Anandtech, and so far, Cortex-A76 was only found in “premium” processors such as HiSilicon Kirin 980. Beside the upgrade cores, the company also claims the processor brings “outstanding gaming, a leap in artificial intelligence (AI) capability and a cutting-edge camera”. 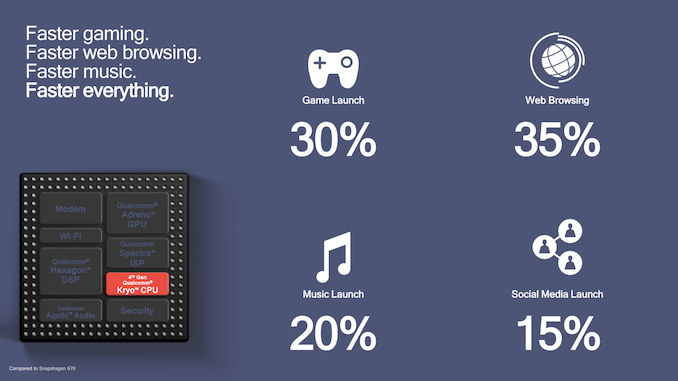 Snapdragon 675 is available now, and should be found in consumer devices in Q1 2019.

Typo on the efficiency cores, the picture says 1.7GHz, you wrote 1.8GHz. (Which means Anandtech’s table is also wrong)

The only thing holding these high-tier, mid-range SoC’s back is the limited screen resolution, as these are like to be more powerful or at the very least, on par with high-end devices from a couple of years ago, like the 810 or 82x series.

As you pointed out I got the number from the Anandtech’s link in the post, so I’m not sure which one is right.
The company has released a product brief now, so we have a few more information including the exact GPU part (Adreno 612), but nothing about the efficiency cores.
https://www.qualcomm.com/media/documents/files/snapdragon-675-mobile-platform-product-brief.pdf

For me 1080p is honestly good enough. I had QHD on a phone before, but I haven’t noticed a difference to my current 1080p phone. Unless you are thinking of VR or pentile AMOLED displays, your eyes must be excellent to spot a difference.

Feature- and perf-wise that should be a prime competitor to the upper-mid-end MT81* and RK33*, so I wonder about the price.