Back in February of this year, Particle introduced three low cost IoT development boards based on Nordic Semi nRF52840 wireless chip supporting “Particle Mesh” networking based on the 802.15.4 radio in the chip and OpenThread implementation of Thread IoT communication protocol.

The company recently announced they were now shipping the kits pre-ordered earlier this year, and released two IoT development tools based on Node-RED and Visual Studio Code. Particle contacted me as well as to find out whether I was interested in reviewing their latest WiFi / Bluetooth / Mesh kit, and I’ve just received the bundle, which comes with a bunch of items, so I decided to write an unboxing post first to have a first look at the hardware, before playing with it in one or two weeks.

That’s what I got from UPS…

From top left to bottom right:

That should be fun to play with. I’ll have a closer look at the Argon & Xenon kits, and the Grove Starter kit below.

Argon board is based on Nordic Semi nRF52840 WiSoC for Bluetooth (setup only), and Mesh connectivity, as well as ESP32-D0WD WiFi & Bluetooth SoC (See comments), although I understand only WiFi will be used in this case.

Everything is neatly packaged inside the box with separate zip bags for the WiFi antenna, the board itself, and other accessories which include a micro USB cable, some LEDs and resistors, as well as a breadboard. 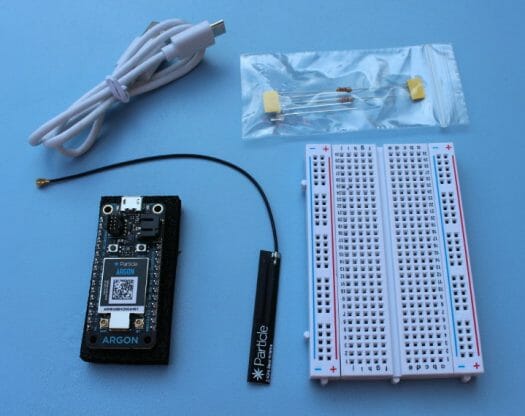 The board follows Adafruit’s Feather form factor and pinout, and includes a microUSB port for port and programming, mode and reset push buttons, u.FL connectors for WiFi and optional Bluetooth antennas, a JTAG/SWD header, a LiPo battery connector, and Blue markings for the two row of I/O headers. 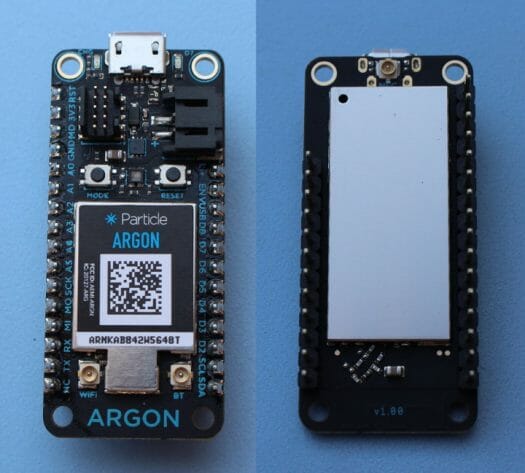 The back of the board includes a shield, and another u.FL antenna connect for NFC. The board fits nicely in the breadboard, with three rows (2+1) accessible on the sides of the board. 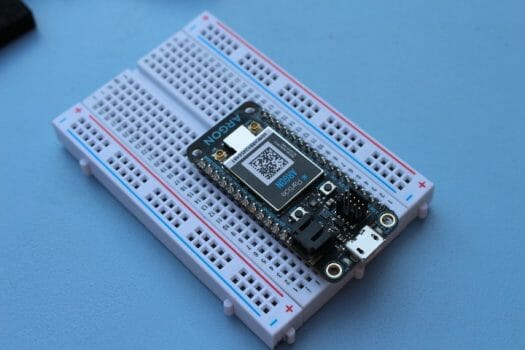 The Xenon board is based on nRF52840 WiSoC and supports both Bluetooth 5 (for setup only), and Particle Mesh networking. It’s also Adafruit’s Feather compatible enabling the use of FeatherWing accessories boards. 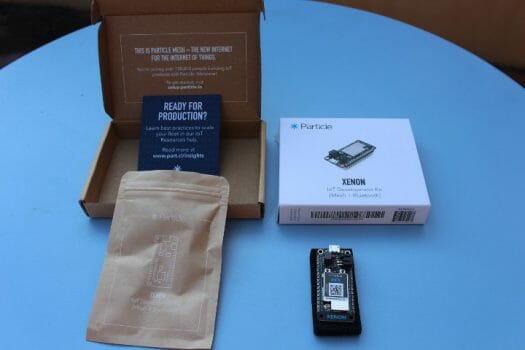 There’s really nothing but the board itself inside the package.

The board design looks almost identical to the Argon board, with a micro USB port for debugging and port, a JTAG/SWD header, a battery connector, the mode & reset buttons, same I/O headers, but of course only one u.FL connector for Bluetooth/Mesh on the top since the board does not support WiFi. The external Bluetooth antenna is optional since the boards include an on-board 2.4GHz PCB antenna for Thread/BLE. 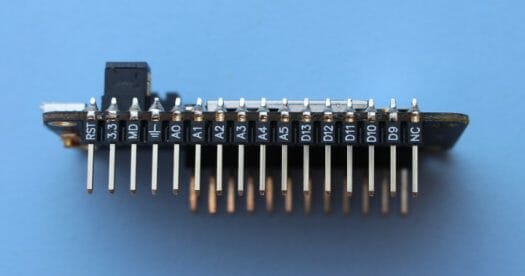 That’s all for today, and I’ll have to study the documentation and getting started guides to review the board and better understand how Particle Mesh technology works.

Im getting more and more confused about all those 2.4GHz wireless protocols.
ZigBee and BLE is still OK thread can also be looked up, but with ANT and all the rest im confused…

Is there somewhere a good overview about all the underlying radio standards per protocoll? I.e. ZigBee and thread are ieee 802.15.4 BLE is something of it’s own, what is all the rest?

For an rough overview, I wrote something in 2011 about local wireless networks https://www.cnx-software.com/2011/08/04/list-of-wireless-standards-for-local-and-personal-area-networks/ It just gives an overview without going into that many technical details, and since it’s old enough, no thread is mentioned.

Im not at all worried about ANT as a standard, im just interested in the silicon. If such devices could be repurposed for ex…
Just recently got pushed an app for its support on my company phone.

P.S. thanks for the kind replies!

I think the ESP32 is accually a dual core version as stated in this Particle blog entry:
https://blog.particle.io/2018/08/03/particle-mesh-hardware-update-important-changes-in-the-final-product/

Thanks I missed the hardware change announcement in August, and relied on the original announcement.