While it’s possible to perform OTA firmware update of ESP8266 with platformIO, Jochen wanted a standalone program to update the firmware of his ESP8266 based devices, and since he could not find any that satisfied his needs, he decided to write his own ESP8266 standalone OTA update tool: BitBumper ESP8266 Flash. 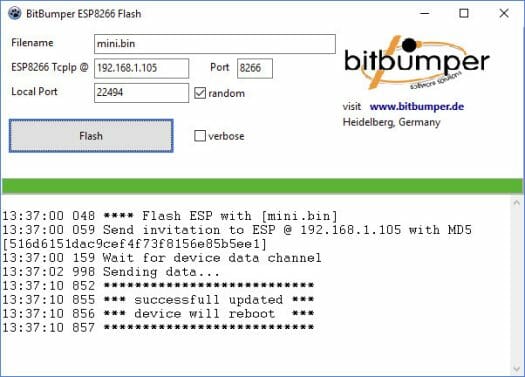 The tools work in the local network or over the Internet, and the firmware needs to support PlatformIO OTA update mechanism with the code having the line:

If your ESP8266 device is already running such firmware, you just need to load the new firmware in the program, input the IP address and port, and click flash.

Jochen programmed BitBumper ESP8266 Flash with Lazarus/Pascal, but as not released the source code at this stage. Instead he shared FlashEsp8266.exe tools for Windows as a freeware program, as well as user and developer documentation here. If somebody needs this tool for Linux, Jochen can build it and release to you as well.

sounds great, thanks for sharing! contacting them for a linux build 🙂

So: I can now put TASMOTA on my Sonoff S20 without having to open them?

You can do it, but not with this tool. The procedure takes some steps though: https://www.cnx-software.com/2017/10/04/upgrading-sonoff-stock-firmware-to-sonoff-tasmota-usb-to-serial-and-ota-update-methods/

Wow, the most short and useful description how to impement OTA in code. Thanks. I’ve read so many resources and there was no mention what basic step to enable OTA on ESP8266.

So can this tool flash some compatible devices running original eWelink firmware to open-source firmware like ESPurna, Tasmota, like an alternative to SonOTA without soldering the serial header?

Or to migrate from ESPurna to Tasmota without connecting to serial console?

No it can’t. The only option I know of to upgrade Sonoff devices without opening them is the SonOTA method you mentioned.