First introduced in 2015, 96boards specifications define mechanical, electrical, and software specifications for single board computers, but in 2017 Linaro asked companies to provide some feedback on what they’d like for a 96boards system-on-module standard.

And for the first day of Linaro Connect Bangkok 2019, the 96Boards SoM specifications have now been announced, together with the introduction of Rockchip RK3399Pro powered TB-96AI and Rockchip RK1808 based TB-96AIoT, the first compliant 96Boards SoMs, and corresponding 96Boards SoM Carrier Board.

That’s plenty of multiplexed signals which at first sight open the door for potential incompatibilities between modules. 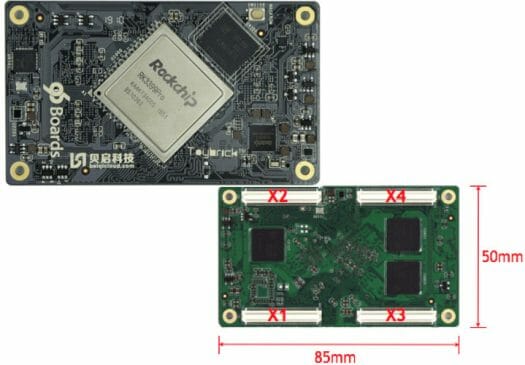 It also appear some of the signals are optional, as for example X2 is supposed to have Ethernet, but in the list of features below it is missing. 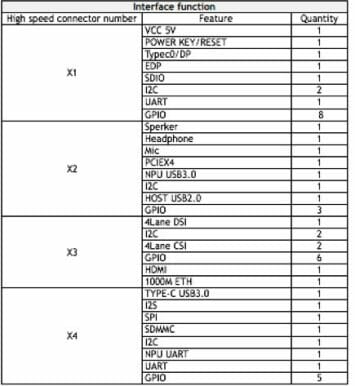 TB-96AIoT is equipped with Rockchip RK1808 AIoT chip, manufactured using a 22nm process, basically being the 3.0 TOPS NPU found in RK3399Pro processor with two Arm Cortex-A35 cores. The module has a smaller 50x50mm form factor, and may be at an earlier stage of development since only a render of the PCB is shown. 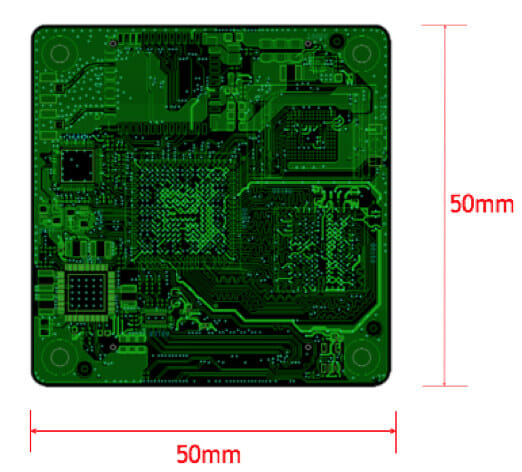 We’ll also need a carrier board for those module, and one is indeed provided with support for both SOM-CA and SOM-CB form factors, as well as 96boards Mezzanines (add-on boards).

All hardware will be sold through a company called Beiqicloud, which should be related to VAMRS because of the “ToyBrick” reference on the boards silkscreen. You’ll find details about all three hardware platforms on the products page of the company.

You may wonder where you can download 96Boards SoM specifications, and the answer is I don’t know, but eventually they should be listed here. The new 96Boards specs have not been announced by Linaro and/or 96Boards yet, and instead I found most of the information in a blog post on Seeed Studio.

What a lame April Fool!
Not even remotely as credible as the other post of the day.

Regarding to the lack of mention of Ethernet for connector X2, I suspect it’s because as SoCs are evolving towards SERDES lines, the boards are evolving this way as well. It’s much better to define a number of indifferenciated SERDES lines on a connector, route them to various onboard chips and connectors and configure them using the DT at the SoC level than always having to compromise between certain options.

When are we going to see a normal RK1808 dev board?