Most people will probably think about Intel and AMD when asked about x86 processors, at least those who understand the question… But there are also other companies such as Zhaoxin (based on VIA Technologies designs) and DM&P.

Last time I wrote about the latter was in 2015 with the introduction of DM&P Vortex86DX3 dual-core x86 SoC for embedded systems and the corresponding evaluation board. The company is still making new x86 processors, and I’ve just been information the company unveiled  Vortex86EX2 dual-core processor last year with master and slave cores suitable for running two operating systems at the same time without the need for virtualization, nor hypervisor. The new processor still supports ISA & PCI interfaces for legacy expansion cards and targets real-time industrial or automation applications. 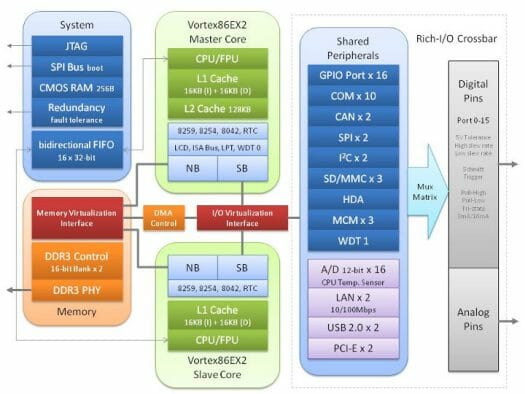 What the processor is missing compared to older DM&P processors is a storage interface like SATA or IDE.

The company mentions the processor supports “truly two BIOS, two OS, no need hypervisor and OS virtualization”. Vortex86EX2 processor supports Windows CE 6.0 and Embedded Compact 7, Linux up to kernel 4.14 with Qt support, and buildroot build system. Other OS such as QNX, VxWorks and RTOS 32 may be available on request.

VEX2‐6890 is the name of the official evaluation / development board for Vortex86EX2 with the following key features:

The company can provide a detailed reference design including schematics, Gerber, layout, and layout guide to those who contact them. They also have a download section on the processor’s product page, but it’s not working for me right now. Since Vortex86EX2 targets the embedded space, the company provides a 10-year life cycle for the chip.

The 1-hour video presentation below is in Chinese, but with slides in English.

Small correction, the Zhaoxin CPUs are based on Centaur technology which is developed by Centaur in the US. They might be a subsidiary to VIA, but VIA has never made a single CPU, it’s always been based on others technology and simply branded by VIA. https://centtech.com/

” The company was founded in 1987, in Fremont, California, USA by Cher Wang. In 1992, it was decided to move the headquarters to Taipei, Taiwan in order to establish closer partnerships with the substantial and growing IT manufacturing base in Taiwan and neighbouring China.[2] In 1999, VIA acquired most of Cyrix, then a division of National Semiconductor. That same year, VIA acquired Centaur Technology from Integrated Device Technology, marking its entry into the x86 microprocessor market. VIA is the maker of the VIA C3, VIA C7 & VIA Nano processors, and the EPIA platform. The Cyrix MediaGX platform remained… Read more »

A long time ago I bought some development boards with the DX2 CPU (to use windows embedded), and some USB devices presented erratic behavior after a while (smartcard readers, biometric readers, etc). After a lot of debugging, I discovered a bug inside the USB controller used in the vortex SoC. I contacted DMP and they said: well, we knew that USB had that bug and is a hardware bug, so there’s no fix, there’s no workaround, and maybe we’ll fix it in the next SoC revision.
Threw all the boards to the trash, never used DMP hardware again.

Small correction: “8-channel 12-bit ADC” should be 16-channel as per the website. Also, there seems to be an additional small PCIe slot on the right side of the EVB.

I got my 8-channel ADC from the “Features” tab, but you’re right that they wrote 16-channel on the overview tab.

@Jean-Luc Aufranc (CNXSoft) i am not sure if you are interested, but i did some digging in the Eboxes and specifically their graphics chipsets. They often mention in their PDF’s that its an Integrated Graphics Chip but that ofcourse really vague.

Certain Ebox models have VIA CPU’s and Unichrome graphics, but the Vortex’s have 2D acceleration. They could make for nice DOS consoles and even retro machines like that. So let me know if you want those details.

I don’t think I’ve ever heard about Eboxes. You can share the details through the contact page or direct email cnxsoft at cnx-software.com

Someday i’d like to see a post about the mysterious RDC EmKore DE/DS x86 CPUs… Never found boards or final products that use these SoCs, ever. I’m curious about if they’re just rebranded Vortexes, or another entirely different development.

I’ve contacted RDC to find out. We’ll see if they answer. If they do, and can provide some info, I’ll write about it.

Thank you. AFAIK, DM&P has two x86 licenses: One inherited from ALi in the form of the M6117D, a 386SX-based chip from a time everybody was doing the same and Intel played deaf. And another one bought from SiS, based on former Rise Technologies’ mP6 design… So, fair game there. With RDC it’s all muddy… I know they’re making 80186 compatible chips for routers etc since early 2000’s, and at one point they also sold *rebranded* (NOT licensed) Vortex86 chips as the IAD line, with permission from DM&P. Now they have these EmKore SoCs… and details on either of these… Read more »

Sadly, they are unable to provide information about their customers’ products: Dear Mr. Jean, Sorry for our late response. Firstly, we would like to thank you for the interest for RDC’s Emkore Series processors. Regarding to your requirement, we are afraid that we cannot assist. Since most of our customers are IPC-related or for ASIC service, the target application would vary according to their products. Therefore, the details of final products, such as EVB boards or hardware platforms, might be hard to acquire for us, and those are confidential. Thank you again for your understanding, and please let us know… Read more »