Last year, we wrote about F&S Elektronik Systeme PicoCORE MX7 system-on-module (SoM) powered by NXP i.MX 7ULP processor manufactured with a 28nm FD-SOI process, and that was announced a year earlier. The official launch of the module was planned for Q3 2018, but there have been some delays as LinuxGizmos reports NXP has only started mass production of their i.MX7 ULP this June.

With the official launch of i.MX 7ULP, the company also introduced the official i.MX 7ULP Evaluation Board (MCIMX7ULP-EVK) as showcased on Element14’s community and several other companies announced i.MX 7ULP systems-on-modules.

The i.MX7 ULP family of processors is an extremely power-efficient series, that is utilizing lower power for more functions. The SoC is being touted as the most power-efficient processor that can be obtained that also houses a 3D GPU.  Although like the i.MX7, the i.MX 7ULP combines both Cortex-A7 and Cortex-M4 cores but can effectively bring the power states even lower than the already power-efficient i.MX7.

The real divergence is the i.MX7 ULP boasts a 3D Vivante GC7000 NanoUltra GPU, while also carrying the 2D G320 Composition Processing Core GPU. In the overall specs the i.MX7 ULP has a 256 KB L2 cache, with security structures that include eFuses, RNG, encrypt/decrypt. Tamper detection, as well as boot and RTC.

Features include as follows. 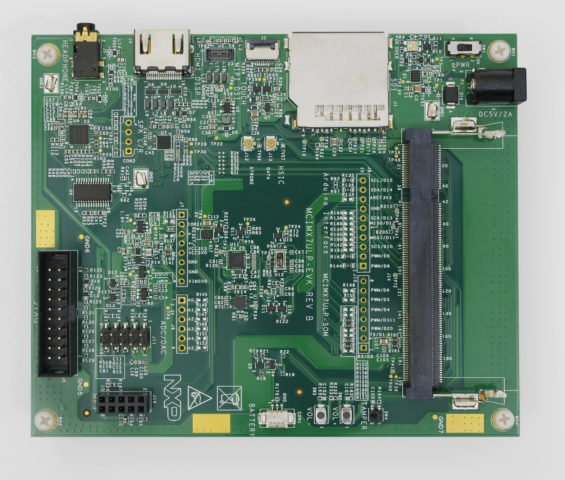 The EVK for the i.MX7 ULP SoC is costing $199.00 and come with support for Linux and Android. The Cortex-M4 chip supports FreeRTOS.

The compute module of the EVK could also be used as an SBC. The rundown on what the unit comes equipped with is as follows.

The Carrier Board of the i.MX 7ULP EVK 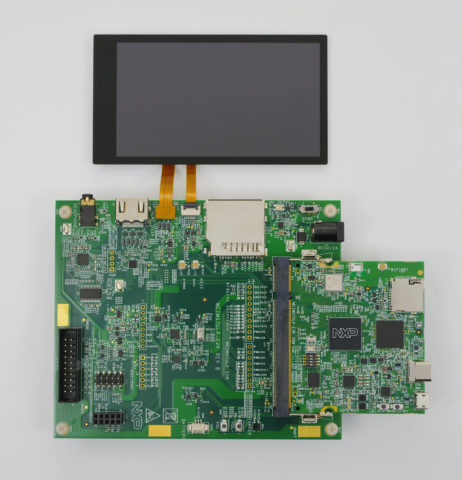 Additional EVK features include USB HSIC, Arduino, MFI, ADC/DAC interfaces. JTAG and UART/USB debugging features are available. And to add to that you get a 6-axis accelerometer/magnetometer, gyroscope, and an I2C pressure sensor altimetry.

Other Platforms for i.MX 7ULP

Volansys’ VOL NXP i.MX7ULP uSOM is an ultra-low-power processor SOM, carrying all the features of the i.MX 7ULP, as well as being targeted for the multiple portable markets, such as wearables and portable devices. Its features are focused on long battery life and high-end graphics. Volume pricing starts at $55.

SoMLabs’ Action SOM-7ULP module is now shipping with an SoC clock speed of 800 MHz. There is support for Linux and Android and the Cortex-M4 MCU is run by FreeRTOS. The MXM314 connector includes MIPI-DSI, 24-bit Parallel camera, USB 2.0 OTG, up to 4x 12C, 4x SPI, 2x 12-bit ADC handling up to 16 input channels and audio interfaces. 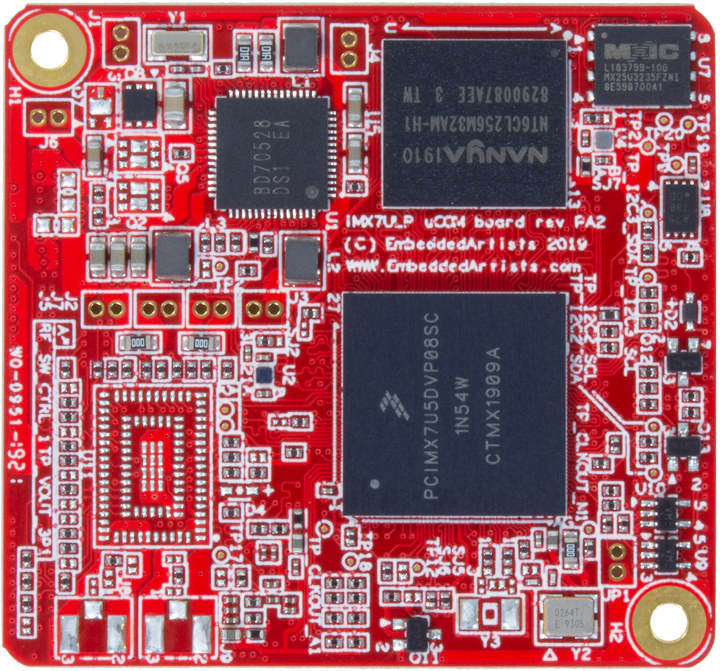 Embedded Artists’ iMX7ULP uCOM is a compact (42x45mm) module that targets the portable device market with support for battery, sleep mode for the Cortex-A core, and wake up using the Cortex-M4 core.

F&S Elektronik Systeme PicoCORE MX7 SoM we covered last year has now launched, and the Starterkit PicoCore MX7ULP Linux is now availablefor 180 Euros including one module, a baseboard, a cable kit, access data to documentation and software. Price of the module itself is available on request.

Fu*king finally. They have been promising this chip since the end of 2017