A Networking Video Recorder (NVR) is designed to record and playback videos from multiple IP cameras usually connected over Ethernet, and in many cases powered over Ethernet (PoE). The main purpose is for security applications allowing caretakers to monitor multiple cameras at the same time on a mosaic screen.

There are plenty of turnkey NVR solutions on the market, but SoliRun, an embedded systems company known for its modules and single board computers, recently introduced the ClearFog GTR A385 family that supports up to eight PoE/PoE+ Gigabit Ethernet Ports. 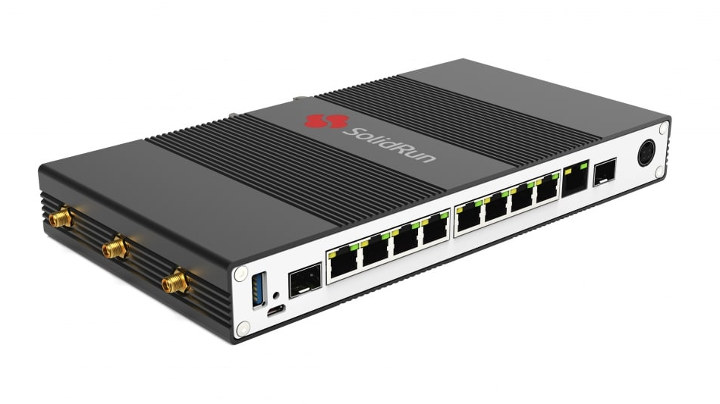 The ClearFog GTR A385 family currently includes two modules with GTR S4 supporting up to four cameras, and GTR L8 up to eight cameras.

Marvell ARMADA 385 (A385) processor should have pretty good software support as it is used in Turris Omnia open-source router, and SolidRun ClearFog Pro board relies on a similar ARMADA 380/388 SoC. Having said that the developer page is light on software resources at the time of writing. The solution should still be more much flexible than on typical NVR platforms where you do not usually have the option to customize the software.

Both board support a maximum of four PSE PoE++ 802.3bt ports up to 90 Watts each, and up to four or eight PSE PoE+ 802.3at/af ports up to 30W each. It looks like this can be used for daisy-chaining multiple boards, and increasing the number of cameras powered by a single PSU.

SoliRun ClearFog GTR L8 A385 is sold for $345 with 1GB RAM, and pricing for GTR S4 is “coming soon”. More details may be found on the product page.