FriendlyELEC is better known for their low-cost tiny single board computers, but the company has also introduced systems-on-module in the past such as Smart6818 module powered by Samsung S5P6818 octa-core processor.

The company has now launched another system-on-module with SOM-RK3399, which as its name implied features Rockchip RK3399 processor, as well as a corresponding carrier board mostly designed for artificial intelligence and computer vision applications. 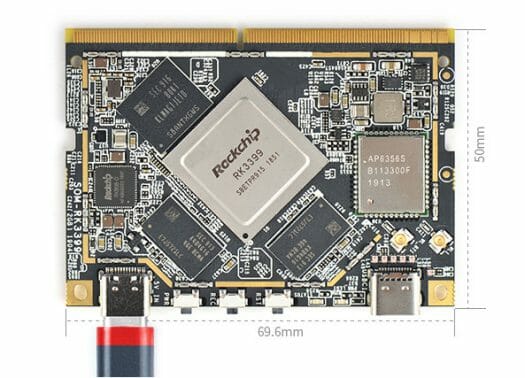 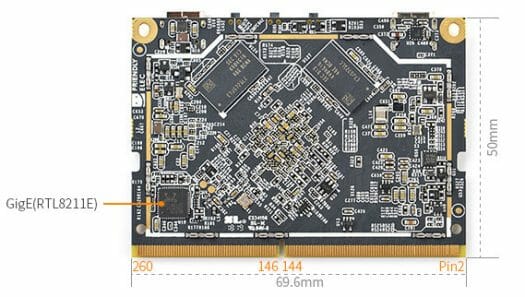 In theory, the module can work in standalone, as you can just use the USB-C port on the left for power, and the USB-C port on the right to connect to a display, Ethernet and/or USB input devices via an adapter. But obviously that only really works for applications where you don’t need access to the many I/O’s offered by the module. One potential application might be digital signage where you need just a power supply, and a display while getting the media files over WiFi.

SOM-RK3399 support Android 7 & 7, FriendlyCore OS based on Ubuntu Core 16.04 or 18.04, as well as Armbian and Lubuntu since it can leverage the software work done for FriendlyELEC RK3399 SBC’s. The company also provides Rockchip’s Android NN SDK with Android 8.1 to leverage GPU acceleration for AI workloads. You’ll find download links and documentation in the Wiki.

Most people will likely want to get started with SOM-RK3399 development kit to easily access all of the interfaces exposed by the module.

Key features and specifications of the carrier board: 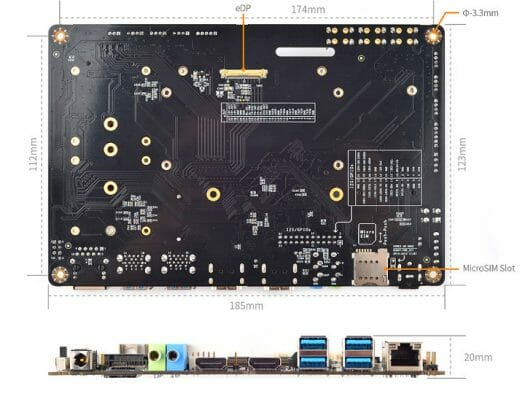 The Wiki for the carrier board contains more details information about the pin layout and other technical parameters.

SOM-RK3399 module is sold for $75 with two free antennas. Accessories useful for the carrier board are also available as an option, including 7″ and 11.6″ eDP touchscreen displays, MIPI camera modules, and so on[Update: The complete SOM-RK3399 development kit is now available with the carrier board, SOM-RK3399 module, the heatsink fan pictured below, two antennas, a USB-C cable, a  12V/2A power adapter, and a USB to UART debug board for $120 plus shipping]

(I’m an American) — “FriendlyELEC is better known for their low-cost SBCs…” Not as low-cost as they used to be due to tariffs. Thanks Trump.

What the tariffs on such boards? 10% or 25%. Will there be additional fees?
Here if I receive packages from DHL or FedEx that are hit by customs duties, I get an additional “handling fee” from them.

I wasn’t serious, I was joking. The tariff on electronic boards from China is 25%. My recent package from FE does not show this duty or tariff. But then I see it was shipped from Hong Kong. Maybe that’s how they escape the tariff?
The price of FE boards has gone up over the last couple of years, but it’s not from the tariffs, and least not as far as I can tell. Yet.

Tell them to write ‘sample’ on the invoice and mail it with ePacket or surepost — something that will end up in the Post Office. DHL and FedEx will collect the tariffs, so far I have not had a single package via the Post Office ask for it.

That’s mostly my experience here (in Thailand) too, except maybe for once or twice where I had to pay customs duties at the post office.

I remember now… when I placed my order I thought it was odd that shipping via DHL was cheaper than by China Post. Normally DHL costs more. Of course I chose DHL, it’s much faster — got my package in only 8 days. So what I deduce is the China Post packages are shipped from China and include the tariff, while the DHL packages are shipped from Hong Kong and have no tariff.

Gig Harbor, WA 98335
Is in USA and sells friendlyarm, so what’s the price difference straight form them?

Their prices are higher than direct from FE. Which is fine, ARMWorks needs to make a profit. If I needed something in a hurry I’d order from them.

ARMWorks had to pay the tariff, that’s why they are higher. They ordered a large quantity which customs collected on for sure.

The tariff is collected by US customs when the package crosses the US border. Tariffs can be quite annoying. I once had to drive to the airport to pay $3.75 to release a package from Africa. Customs only took cash. And if I didn’t come within four hours they were going to put it into a bonded warehouse and charge me $100/day storage. I almost abandoned the package, it was only worth about $100.

IIRC, the rules for individuals are a bit different. For US, up to $800 duty free, over that a fixed tariff, which isn’t always collected. For importers, tariffs have always varied (and even with the “blanket 25% tariff on China”, it’s possible to ask for and receive an exclusion for a specific product class); due to powerful special interest groups, some items have had high tariffs for a long time (in the US, import tariffs on sugar are a notorious example).

Is this the same edge connector of the RockChip based “PX6” SoM used for automotive purposes (radio, nagivation ,etc)? Also comparing the specs, PX6 and this RK339 seems very simiar.

I received the board yesterday and begin the first test. First problem, the Marvell PCIE board hit the camera connector, so I had to desolder it… The marvell controler work perfect out of the box, video output on Type-c too. The beautiful dissipator design is finaly not efficient because they use a pad to transfer heat and it’s not efficient for handle a Make -j6 for long, heat stay on chip. I have to make a copper pad because of the over components around…