LEGO has provided robotics kit for years, and LEGO blocks and accessories in general are great to build all sort of projects, so it’s not surprising third-parties have come up with LEGO-compatible boards and accessories for makers which include DFRobot BOSON kits, STEMTera smart breadboard, Brixo LEGO blocks with built-in electronics, and more.

Snekboard is another option with the Microchip SAMD21 board designed to work with LEGO Power Functions motors and switches are programmable with MicroPyhon based CircuitPython or Snek programming languages. 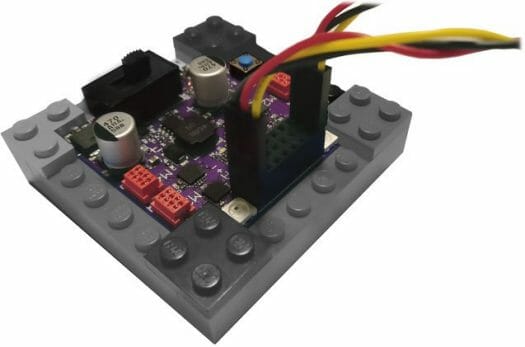 As we can see from the comparison table above, there are other motor control boards for LEGO motors, including LEGO’s own Move Hub, but Snekboard is the only one from this list to support up to 4 motors, and the developer – Keith Packard – attempted to provide a good mix of features.

It’s the first time, I hear about Snek programming language, and like CircuitPython, it is a fork of MicroPython, but Snek is supposed to be even simpler to use and has a lower footprint.

I wonder how much amp’s he gets out of his 9V boost regulator. And if he gets 4x 2.8A (I assume the 2.8A is for each motor) out of it, I wonder which booster he uses.

So it are 4 separate DRV8800 motor drivers each can handle 2.8A and the booster delivers 4.5A. Not enough for the full potential but more than I expected. Nice.

OK, just reviewed the charts and the 4,5A is input current. Output is more around 1000mA. I don’t see an alternative input source where you can connect for example a 2S LiPo to get more power out of the drivers.