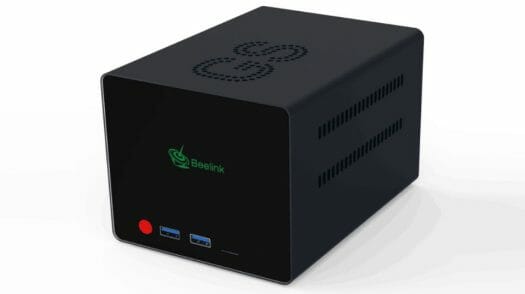 After Beelink GT-King and GT-King Pro, it appears the company is working on another Amlogic S922X(-H) TV box with Beelink GS-King X providing two internal 3.5″ SATA Bays. [Update May 14th: The post has been updated to reflect two SATA bays are available, not only one] 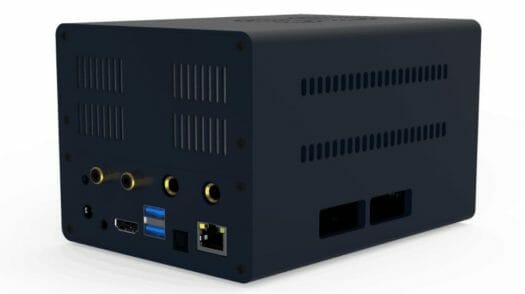 Beelink GS-King X is said to run Android 9.0 with Google Assistant and Widevine L1 DRM. It will apparently ship with an air mouse supporting voice commands.

AndroidPC.es reports Beelink GS-King X will become available at the end of May for a price ranging between $170 and $200. There’s no other information nor product page on Beelink website at the time of writing.

Hmm… Great specs… (Sata, drm1,Dac) Can’t wait to see the review
But…omg what a ugly box, don’t see my self buying this puppy
( why not use msata, give it a new smaller /better looking box and at bt5 –beelink )

Update: Looks like Androidptv now reports…
That it supports 2 disks up to 16tb

SATA is a standard using LBA48 addressing and since the used USB-to-SATA bridge is capable of more than 2TB (32 bit integer overflow limitation of old bridges) the real limitation of this device is 2 x 144.1 Petabyte (once disks are available).

TL;DR: there exists neither an 8 nor a 16 TB limitation with SATA.

Hmm…except for the thumbnail cache issue ( on some devices? )
I connected a 150gb HD with contents to tvbox (box – dislplaylink – usb3 to msata)
Then…it got issues like WiFi drop.. Unable to play vids
Turns out android&kodi made a thumbnail cache of 6gb ( filling internal space completely )

Sorry, I was solely talking about technological limitations and not about random crappy software behavior above (‘apps’ or Android in general). A software ‘filling internal space completely’ acts plain stupid and background tasks should of course run with background priority (also a no-brainer).

BTW: ‘WiFi drop’ when connecting an USB3 disk might be just the usual interference issue when using 2.4GHz band.

It seems like a small part of what this is, is missing. This, to me, looks like something that was made for karaoke use, thanks to the two 6.35mm audio jacks and the two RCA jacks around the back. This also makes sense with the inclusion of a 3.5″ drive, as that would be for storing karaoke videos and song texts on.

Why would anyone spend so much for a device which has an operating system which will probably receive no updates, and very little support.

Would choose a generic windows machine before ever considering this.

Amlogic soc is a good sign, im 100% sure there will be linux/coreelec for this soon

Actually, once I’m certain it can run Linux, I could buy one to replace my Synology NAS that I’m using as a backup server. Having real storage to put an operating system instead of having parts of it on the data hard drives, and having real RAM to run rsync is quite interesting! NAS devices in this price range usually have ridiculously low amounts of RAM and are hardly usable. I’d definitely prefer a much smaller case for a single 1 TB SSD but I can deal with this. I could even use a second one to replace my NFS/mail… Read more »

Excellent point, for an unknown reason I imagined that these were native SATA ports :-/

You could just about piece together an ODROID-H2 with the same specs but is much better supported in Linux and has native SATA for the price this is going for. That also has a NVME slot for your OS.