ITEAD had started to expand from WiFi and RF433 capable Sonoff home automation devices into Zigbee smart home solutions in recent months with the launch of products such as Sonoff ZBBridge WiFi to Zigbee gateway and a TI CC2531 based Zigbee USB dongle preloaded with firmware compatible with Zigbee2MQTT.

But so far, they had only one Zigbee node, namely Sonoff BASICZBR3 Zigbee power switch. More options are now available with the launch of four Sonoff SNZB Zigbee sensors and switches working with the company’s ZBBridge. 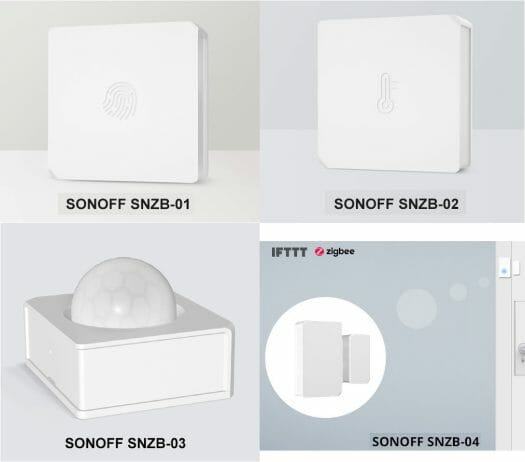 All four devices are powered by a CR2450 coin cell battery and you’ll get a notification once the battery level drops below 10% in the mobile app. Which mobile? The usual eWelink app for Android or iOS which also supports integration with IFTTT. If you prefer open-source firmware, it may take more time, or never happen, as while we’ve reported on Zigbee open-source firmware, most of the work is based on TI CC25xx chips, and Sonoff Zigbee sensors are all likely based on Silicon Labs EFM32 Zigbee MCU like it is for their ZBBrigde gateway.

ITEAD Studio now offers a useful Zigbee ecosystem with a WiFi to Zigbee gateway, power switch, power socket, and battery-powered sensors that can control your devices or send alerts based on temperature and humidity readings, whether motion is detected, or a window/door is opened/closed. The Zigbee switch allows the user to control device by the press of a button without having to start the mobile app.

The just-launched Sonoff SNZB devices are also really affordable with pricing ranging from $7.99 to $9.49.

I don’t imagine that the various peripherals would need to be flashed with Tasmota. It would only be the ZigBee to WiFi bridge that would be a serious candidate for that. That would be the only part that would need to change to link with your own infrastructure rather than the eWeLink servers, I presume.

Yes, that’s my understanding too.

Not Tasmota, however, Silicon Labs EFR32 Series 2 are powerful MCUs so might come to other alternative firmware.

Not going to be as advanced or flexible as Tasmota but I expect to see support for external sensors sooner or later.

There are already alternative or hacked firmware for Texas Instruments MCU’s so we might see community releases.

Those are probably based on newer Silicon Labs EFR32 MCU (not EFM32), same or similar to their Sonoff ZBBrigde Zigbee bridge.

ITead list as supporting Zigbee 3.0 so surely not based on Texas Instruments CC2530 as it does not officially support Zigbee 3.0

So the Sonoff BASICZBR3 was not the only Zigbee device that ITead had since before.

Impressive pricing considering they use Silicon Labs chips.
Not very impressive looking sensor as such though, but I guess the design is where they’ve cut the corners.
CR2450 batteries are a pita to get hold of though, at least compared to CR2032’s.

Marketing is all about playing strengths, cheap or not if it doesnt fit the bill then its not gonna be volume product. But thats kinda how it is, throw everything at the market and see what people flock to. Otherwise it’s yet another burner geek toy.

The out of the box eWeLink app is terrible (read the reviews on Google Play), and ITEAD/Sonoff won’t lift a finger to open up the design a bit to allow hooks for community development. If they did, device sales would probably skyrocket. Look at the original Sonoff Basic sales that took off when Tasmota dropped. Sometimes the reason for behavior like this is that they (ITEAD/Sonoff) are spying on us and monetizing the data.