MINIX NEO G41V-4 is the latest mini PC from the Hong Kong-based company, and this time they’ve gone fanless with a new design that should allow proper cooling with a large heatsink, plenty of ventilation holes on the top, as well as a dust-resistant meshing to present dust from entering inside the enclosure.

I’ve now had time to review the fanless mini PC, and I’ll report my experience with Windows 10 Pro.

Switching to Windows 10 Boot from SSD

I had installed the optional 240GB SSD in the first part of the review. It offers an easy way to get more storage and performance, and you don’t need to reinstall Windows 10 Pro since it’s already installed in the SSD.

You just need to change some settings in the BIOS as explained in the user manual. To be on the safe side, you may want to follow the instructions to the letter, but for convenience, I followed a slightly different method since I installed the SSD before booting the mini PC.

During the first boot, Windows 10 Pro will start from the eMMC flash, and you need to make sure Windows is activated before switching to the SSD.

In my case, it did not work automatically, so I had to click on Troubleshooting, and it was successful. 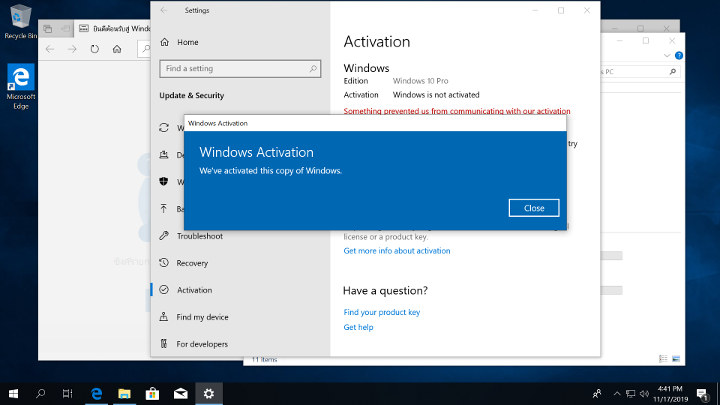 If you see Windows is activated with a digital license, you’re good to go, and it’s time to reboot the computer.

Press the delete key on the keyboard to enter the BIOS (Aptio Setup Utility), and go to Chipset->South Cluster Configuration to set SCC eMMC Support to Disable. 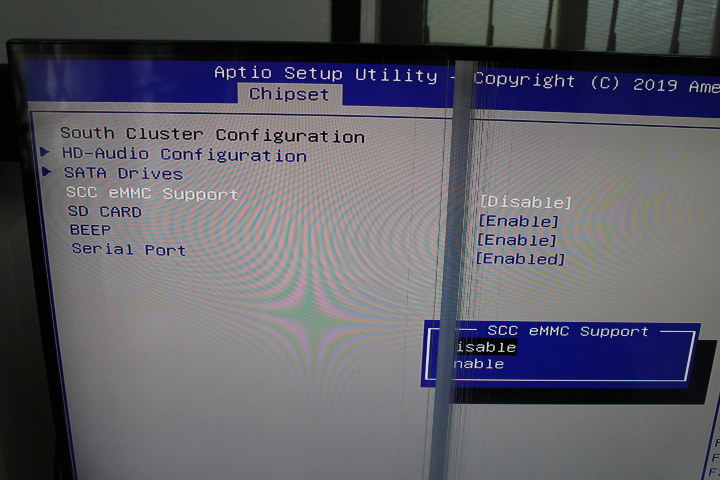 Note NEO G41V-4 will beep once each time it boots, but if you don’t like the noise you can also disable it with the BEEP setting on the same page of the BIOS.

I could then boot Windows 10 Pro from the SSD, and I had nothing else to do. But it’s a shame not to be able to access the 64GB eMMC flash anymore, so I went back to enable it again.

I thought I may have to change the boot sequence, but it’s not needed. 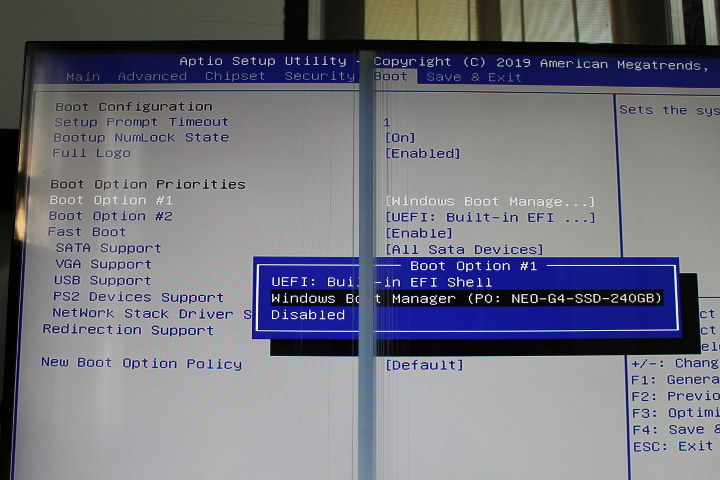 D: and E: are respectively the NTFS and exFAT partitions from the USB 3.0 hard drive I use for reviews.

I’ve included a screenshot of Device Manager for people interested in specific details.

… as well as HWiNFO64 system summary which shows the processor details, and that the mini PC is using 4GB single-channel memory.

MINIX NEO G41V-4 can actually support up to three displays via HDMI, DisplayPort, and VGA output, but I don’t have any monitors with DisplayPort nor an adapter. So I only tried dual-display configuration with HDMI and VGA outputs. 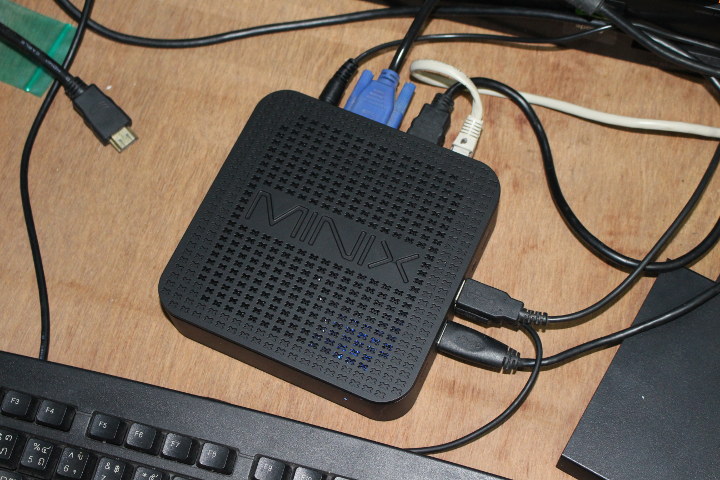 For some reason, Windows did, however, complain about non-optimal resolutions, recommending 1920×1080 for my 4K TV, and 1024×768 for my second TV/monitor. Not really a problem, and I just ignored the warning.

I played some 4K videos store in my USB drive in Kodi 18.5 with automatic frame rate switching enabled:

8-bit 4K H.264 and 8-/10-bit H.265 videos play fine up to 30 fps, but if frame rate is closer to 60 fps there will be dropped and skipped frames that clearly affect the smoothness of the video playback. Dropped are very noticeable, but skipped frames not so much. VP9 videos have the same problem as on MINIX NEO J50-4 with hardware decode enable but some timing issues.

Note that while running Firefox the system will be very sluggish, so you can’t do anything else. In Chrome, if we let the 4K video play without user intervention it’s fine, but if I ever just move the mouse pointer the video will be choppy with some audio cuts…

PassMark PerformanceTest 9.0: 1144.4 points for the fanless mini PC against 1379.5 points for NEO J50C-4 despite the excellent DiskMark score for the former (due to the SSD being used).

3DMark scores are roughly as expected:

I tested storage performance with CrystalDiskMark, and the SSD performs really well.

The eMMC flash is slower, but performance is still pretty and performs better than most devices.

Almost as good as it gets, but let’s run the test again one direction at a time:

Excellent as one should expect. Now time to disconnect Ethernet, and connect to our WiFi AC (WiFI 5) router 3 meters from our test device.

The results are good with the best device usually getting around 250 Mbps, with the exception of Khadas VIM3L that achieves a cool 386 Mbps in the same location thanks to support for RSBD (Real Simultaneous Dual-Band).

Let’s test how well the mini PC can stay cool under load in a room with ~28°C ambient temperature.

This is what I got at idle time. The CPU clock is around 900 Mhz at idle, and CPU temperature around 58°C.

I ran the stress test (AIDA64 Extreme) for over 13 hours while running HWiNFO64 to check for any CPU throttling.

HWinFO64 does not detect any CPU throttling, not power limit throttling, but it’s clear from the chart above, and the video below that the processor will run at 2.3 GHz for a period of time, before dropping to as low as 400 MHz for several seconds, before going back up. You can see how it behaves in the video below.

So If you hit this problem while watching videos or playing games you’ll likely get a sudden drop in frame rates. I’m not saying it’s supposed to happen often since video decode does not usually require a lot of CPU usage if hardware decode is used, and gaming mostly relies on the GPU, but it’s still something to keep in mind.

Having reviewed both MINIX NEO G41V-4 and NEO J50C-4, I have to say the latter performs quite better with constant performance under loads, and 4K H.265 working fine up to 60 fps. The main downside is the fan noise.

MINIX NEO G41V-4 performs like a typical Gemini Lake mini PC, but under load CPU throttling behavior could likely be improved as performance just drops off a cliff for a few seconds when the temperature reaches around 90°C.

Storage performance is really great especially if you’re using the optional SSD, although the eMMC flash performs well too. I had no troubles with networking with both Gigabit Ethernet and 802.11ac WiFi 5 working with good to excellent throughput. Another advantage of the mini PC is support for triple display setups via HDMI, VGA, and DisplayPort outputs.