AAEON UP Xtreme Edge (UPX-Edge) is a rugged embedded computer built around the company’s UP Xtreme SBC with a choice of 15W Whiskey Lake-U processors ranging from Celeron 4305UE to Core i7-8665UE, and optional Intel Movidius X AI accelerator cards. 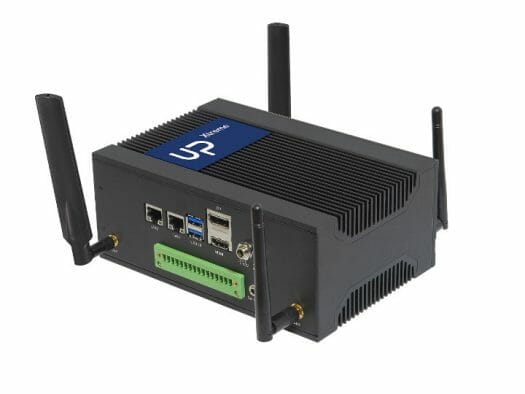 This is how aotu.ai describes BrainFrame smart video analytics platform:

BrainFrame is a smart vision platform that is built to be easy to scale, highly configurable, and deployable on-premise or to the cloud. BrainFrame turns any connected camera into a continuously monitoring sensor for analytics, serving a variety of vertical markets.

Powered by an automatic algorithm fusion and optimization engine, BrainFrame enables plug and play integration of VisionCapsules. VisionCapsules are a packaging format for any algorithm running on smart vision devices. These self-contained capsules have a negligible memory footprint and include all necessary code, files, and metadata to describe and implement a machine learning algorithm. Analysis results are provided in a standard format that may be consumed by the smart vision device or by other software clients.

As I understand it, Brainframe is the visual programming equivalent for video analytics where developers can just drop “capsules” to easily and quickly create vision analytics applications. 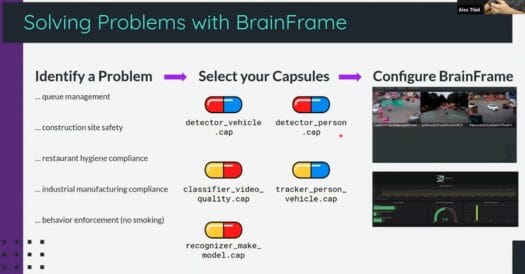 You’ll find a list of existing capsules on BrainFrame website ranging from “people age” to “vehicle color”, and “license plate”. If a capsule does not exist yet, there’s also a Python API, a wrapper around the BrainFrame Linux server’s REST API, that allows developers to create their own capsule(s).

Watch the 20+ minutes webinar to understand how BrainFrame works and watch demos with live and recorded videos in public streets, shops, and offices.

One of the demos shows how many people walk on the pavement vs street, another checks whether any cars enter the bus lane, and another counts the number of people and how long they stay at a given check out lane. All in all, this looks like a pretty powerful and easy-to-use platform.

UPX-Edge BrainFrame Edge AI DevKit is available now, but the price has not been disclosed, and as I understand it they will only ship to the US and Canada. More details can be found on the product page.