AOMedia AV1 royalty-free video codec delivers up to 50% better compression than H.264 and up to 20% better than VP9 for the same video content, so streaming companies like Netflix and YouTube enabled the codec a while ago.

When I play a YouTube video in Chrome in Ubuntu 20.04 and check the stats for nerds info, it will usually show the video is played with “av01.0” codec which refers to AV1, but it’s played with software video decoding using libraries like Dav1d leveraging SIMD instructions. But ideally, you’d want hardware video decoding for lower power consumption for increased battery life, and potentially smoother videos. 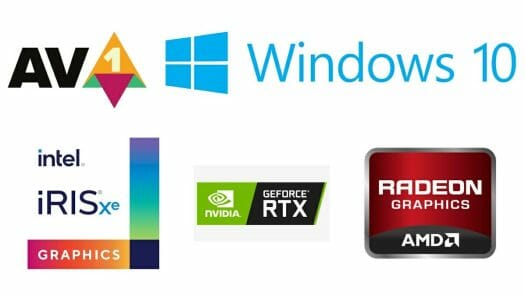 One good news is that Microsoft has recently announced support for AV1 GPU-accelerated hardware video decoding in Windows 10. The less good news is that support will be limited to recent and fairly powerful GPUs. So for instance, if you own mini PCs with older Intel SoC featuring integrated Intel HD/UHD graphics, AV1 hardware decoding won’t be supported.

Here are the requirements listed by Microsoft so far:

Once everything is installed and setup, you should get AV1 hardware-accelerated video decoding in Windows 10. If that works, CPU usage should be fairly low even for 4K or 8K videos.

NVIDIA provides more details about Windows 10 AV1 support for their RTX 30 GPUs, including the ability to handle 8K AV1 streams, AV1 hardware video decoding is enabled in Google Chrome and VLC, and NVIDIA is working with Twitch to support 1440p120 video game streaming at 8 Mbps.

Thanks to “NewsTip” for the tip.

Depends on the machine on Ubuntu i guess. I have a years old intel integrated ultra low power fanless laptop. If i remember correctly, some intel software was needed to install for hw decode to work. Might have been Intel-Media-Driver plus VAAPI.

Sorry, now i remember i needed all that to enable hw video encoding h264 in Openshot. So no idea if it hw decodes youtube in AV1 on my hardware.

Only very new hardware has AV1 hardware decode capability. Like the ones listed in the article, maybe some ARM SoCs like Dimensity 1000, unannounced/unreleased 2021-2022 AMD APUs, etc.

And the driver needed to be enabled in some config text file to work, normal Linux weirdness i quess 😀

I understand Intel Tiger Lake have parts with Intel Iris Xe Graphics, and others with Intel UHD graphics, but I’ve just been told all Tiger Lake processors do support AV1. “The less good news is that support will be limited to recent and fairly powerful GPUs. So for instance, if you own mini PCs with Intel SoC featuring integrated Intel HD/UHD graphics, AV1 hardware decoding won’t be supported.”This is incorrect. All Tiger Lake and Rocket Lake with Intel Xe-LP GPU supports AV1 hardware decoding even on UHD Graphics.https://github.com/intel/media-driver/releases/tag/intel-media-20.3.0“TGL/RKL/DG1/SG1 New Features and EnhancementEnabled AV1 4:2:0 8bit and 10bit decoding for both… Read more »

Hi Jean-Luc,
This mean the codec is actually not part of the ASICs but rather a kind of a firmware layer over the actual GPU core. I thought codes where fully implemented in HDL langages and burn on the asic itself. That is you would need to change GPU version in ordre to benefit from new codec features.

I got answer. It’s apparently just a naming thing for graphics with lower EU counts. It’s the same for Ice Lake.

@Jean-Luc I’ve been happy to support this site by not using an ad-blocker, but since the introduction of that maddening adhesion-container fixed position ad product I have enabled ad-block for cnx-software. I will try turning it off again in a month.

Thanks for the report William. I’ll have to think about it. Are you using the mobile or desktop (with sidebar) website?

There are already patchs to hw decoding on AMD GPU on linux. I believe nvidia has one too in his closed source version.