The Raspberry Pi boards already have their official 4K MIPI camera with Raspberry Pi HQ camera based on a 12.3MP Sony sensor module that sells for $75 and up with a lens.

But e-Con Systems still decided to launch their own 13MP 4K MIPI camera development kit for Raspberry Pi 4 which they currently sell for $99 plus shipping. At first, I dismissed the news, but let’s have a look if there may be some advantages in using that camera devkit. 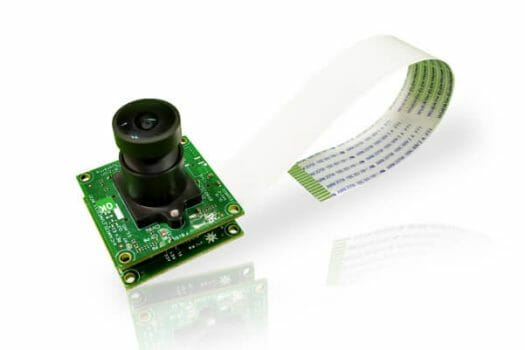 The kit comes with a 15cm FPC cable to connect to the MIPI CSI-2 camera interface on Raspberry Pi 4 SBC. e-Con Systems provides a V4L2 Linux camera driver. support for Gstreamer-1.0, and a sample application with source code for image capture & preview.

The ISP apparently supports MJPEG, but e-Con systems did not bother providing frame rates, or at least a range, for this format. The product page has some documents for download, including datasheets and user manuals, but you need to provide a valid company email to receive the documents, which I did with two emails in different web browsers. I never received the documents even after waiting for several hours.

I’m still not sure why anybody would use this camera over the official Raspberry Pi HQ camera, so I asked the company for details earlier, but have not received an answer in time for this article. The answer may be in the video above, with the company offering design services, so if you plan on making your own commercial product based on a 4K camera and Raspberry Pi, you may get technical support, or they have them design it for you.

If you’d like to buy a sample, the e-CAM130_CURB camera devkit for Raspberry Pi 4 is available on e-Con Systems webstore for $99.

They make great cameras. I’ve got a USB3 4K low light camera of e-con systems. It’s amazing. Even without much light at night it still gives a sharp picture.
None of my 4k action cams can do that. I’ve been following them for years. They make a lot of great tech. Also SBCs and SoMs.

What I can’t understand is why no one is using one of the 48 or 64 mpix sensors, which Xiaomi is using in about every middle class phone, that would make a difference I’d expect…

They are CMOS sensors.
Those sensors produce a lot of data, which is fine if you have a dedicated ISP to handle the deBayering and down sampling, but less good if you have to transmit it to the Pi and process it there.

So in short wrong SOC?