If you’ve never heard about a “half mini-ITX” motherboard, that’s normal, as I don’t think it’s actually a thing. At least until now, as ECS GLKD-HTI is an Intel Gemini Lake motherboard that’s half the size of a standard mini-ITX motherboard.

The board still comes with the usual HDMI, DisplayPort, USB and Ethernet ports, as well as a SODIMM slot for DDR4-2133 memory, an M.2 socket for 2280 SATA SSDs, as well as a SATA 3.0 port. 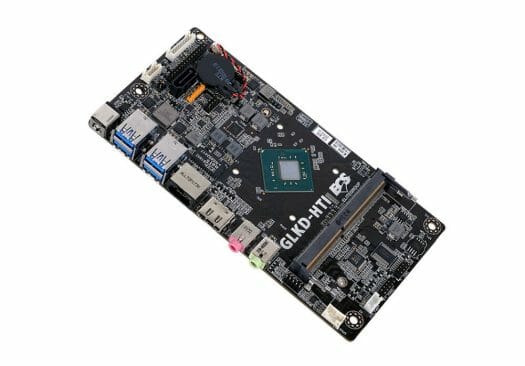 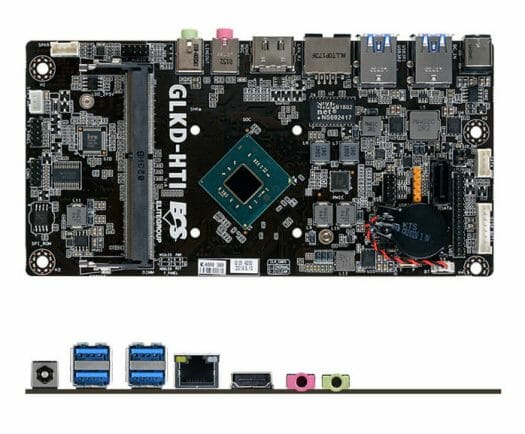 The company only lists supports for Windows 10 64-bit in the specifications, but it’s highly likely Linux can also run on the motherboard. It’s also a little odd that memory capacity is limited to 8GB and HDMI to version 1.4a, so those may be errors. Nevertheless, it will be interesting to find out in what kind of products this board ends up being used into. One could probably make a Keyboard PC with it…

There’s no word about availability and pricing at this stage. More details may be found on the product page.

You’d be willing about it not being a thing, as VIA was the first ones to do this form factor with it’s APC boards and system back in 2012 https://apc.io/

I even wrote about it 8+ years ago: https://www.cnx-software.com/2012/05/22/via-technology-unveils-the-apc-an-arm11-49-android-pc/.
But completely forgot about it. I did not realize it was half mini-ITX at the time, and it was based on an Arm chip.

Interesting specs. However I can’t see the M2 connectors.
Some might want to put that under a keyboard to provide a powerful alternative to rpi400.

If you’re willing to spend, you can get a LOT of, “powerful alternatives,” for a Pi400.

What amazes me about this crowd is that they keep trying to come up with “powerful alternatives”- but are unwilling to spend the money to get one. It belies a lack of understanding about the engineering, etc. involved with ANY of it. If you want powerful… Stick to hand-building PCs folks.

Unless they’ve done something to the EFI BIOS, it should run Linux. That being said… ECS’ quality control sometimes leaves a bit to be desired.

It also depends on driver support. In my experience, it’s quite frequent Linux drivers are not working as expected out of the box.I’ve add troubles in the past with a laptop, and several of Ian reviews reports troubles with drivers.

the gemini late and 8gb cap is a hard cockblock

Depends on the price, which I’m sure will be too high.

8 GB is the max memory for Gemini Lake +Refresh. But it can at least be in dual-channel, which is not the case here.

Hey Jean-Luc, all of the Gemini Lake (Goldmont Plus) SKUs support a maximum of 8 GB according to ARK. In fact, if it has UHD 600 graphics and not UHD 605, we can infer that the choice is between the dual-core Celeron J4025 and quad-core Celeron J4125. As for HDMI:

So they may be cheaping out there.

There are leaks for the Intel Jasper Lake (Tremont) lineup, but nothing about max memory yet. I guess they might get announced next week at CES.

The info on Ark does not appear to be correct.
This has been discussed several times here, but I can’t find the threads.

> This has been discussed several times here, but I can’t find the threads.

IMO the best idea is to link to ODROID wiki with a list of working and non-working modules: https://wiki.odroid.com/odroid-h2/hardware/ram#confirmed_ram_modules

I’m disappointed in myself and with Intel.