Allwinner A100 was supposed to be released in 2019, but a search on Aliexpress showed exactly zero matches. We did write about Allwinner A100 mainline Linux support a little while ago, and today, I eventually found one Allwinner A100 tablet with the $60 Hyundai HyTab 7WC1. I had no better luck in my search for Allwinner A33E and A200 platforms. 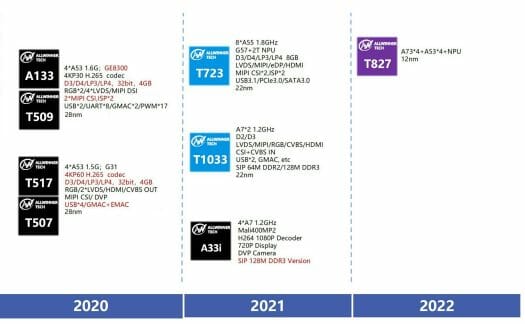 But I also got lucky today with another Allwinner roadmap for 2021-2022 with some very interesting new processors, provided they happen.

But let’s look at the year 2020 first. We already have most details about Allwinner A133 quad-core Cortex-A53 processor, which is also called T509 apparently following the merging of the Allwinner A-Series business unit, focusing on tablets, into the Allwinner T-Series for industrial & automotive applications.

You may have never heard about Allwinner T507/T517, but that’s another name for Allwinner H616 TV box SoC. In case you wonder why confusing customers with different names, read our earlier write-up about Allwinner business units, which explains why this happens, namely support for different industries and software.

Allwinner A33i is actually not a new processor, but I’ve been told it’s the new name for Allwinner A33E. Last year, with the limited information I had at the time, I assume the quad-core Cortex-A7 was an update to Allwinner A33 with support for 4K video. But it turns out the “E” was probably for “Embedded”, and the company simply decided to rename it to A33i to keep the name in line with the previous Allwinner A40i and A60i processors.

Allwinner A33i key features have changed a bit compared to what was released for A33E however, with 4K support gone:

So the processor looks to be designed for low-cost camera and/or smart display applications.

Allwinner loves with Cortex-A7 cores is not over yet, with Allwinner T1033 SoC/SiP featuring two such cores:

With Allwinner T723 things are getting to be more interesting with modern Cortex-A55 cores, and a potential competitor to Rockchip RK3566/RK3568 SoC‘s.

The specifications indeed look amazingly similar to the ones for the RK356x, but we’ll have to look into the details once the datasheet is available. The GPU and AI accelerator should be faster though, although we’ve seen in the past TOPS numbers may be deceptive.

After so many years of waiting, Allwinner will finally release a Cortex-A7x processor! Allwinner T827, which should also be sold as A200 (TBC), will be a 12nm octa-core processor with four Cortex-A73 cores, four Cortex-A53, and a neural processing unit.

If last year info, we had about A200 is still relevant, the NPU should deliver up to 3 TOPS, the VPU will handle 8K decode, and 4K encode, display interfaces will include V-by-One, eDP, and dual MIPI DSI, and USB 3.1 & PCIe 3.0 high-speed interface will be part of the design.

We’ve been told it would compete against the Rockchip RK3588 Cortex-A76/A55, but based on the limited information we have now it will certainly have lower performance and should place itself between Amlogic S922X-B/A331D and Rockchip RK3588.

Will software support not be key? Meaning it years after production before successful use?

I have pretty much dropped Allwinner as an SOC choice. The software situation is unworkable. It has gotten to the point where I don’t think they want international customers. They could fix this with an open mirror of their git on github/gitlab like Rockchip does, but they won’t do that. And I’m tired of having to have a monkey sitting in China that I remote control to get stuff out of them. So I will go back to working on the Rockchip system sitting on my desk.

I’ve heard Allwinner has a developer website accessible only from China. I guess that’s what you are referring to. That’s crazy. That’s actually public information in China, but blocked to the outside world.

Actually, there is an Allwinner developer site, but it is indeed accessible outside China:
https://open.allwinnertech.com/

Only two CPUs documented there.

I agree.
I have also drop Allwinner SBCs.
Bad software support is detrimental to its success, despite having a good cost effective hardware.
Its no wonder Allwinner is slipping in china market largest SOC supplier list year to year.

Rather than so many product line, i hope they would consolidate to a few multi-application SOC, and redirect manpower to software devs.

Rockchip is far more reliable. Yes. But those high end socs are interesting at least on paper… we will see. I ama rockchip fan, but more co petitors.. the better.. and allwinner usually sell crap, not an octacore a55 with decent I/O, not an octacore with big cores at 12nm. This is far better than current socs. We will see how good are from documentation point of view. It could be a disaster like it happened with orange pi 3 that have a broken pci interface…it was a disaster.

rockchip has a relatively high power consumption, they are always pretty hot even if down-clocked…

We use mains power so it is not much of a problem. And we have heat sink on chip. Heat sink probably need when doing AI continuously, but we don’t do it continuously so it is just a small heat sink.

FWIW Sigmastar apparently have some Cortex A53s with memory included now too.
Even one in LQFP like the V3s. Not sure who wants such a thing but interesting nonetheless. Expecting it to be a horror show software-wise. 😀

If the chip comes with an LP-DDR4 interface, picking a 64-bit core is the obvious choice to give customers the option of large memory configurations that are not awful.

Even on SiP with smaller integrated RAM that only ever runs 32-bit code, the A53 or A35 still has a number of advantages over the A7, given that it’s a slightly more modern design and optimized for smaller manufacturing nodes.

The part numbers seem to suggest they are dash camera parts. The current A7 SoCs in those lines have a hacked up RTOS based SDK instead of Linux.

I think a Cortex A53 on a two layer JLCPCB board would be cool though :).

I like SiPs. they save the hardest part of making a board – the DRAM setup.
Just need to go from 128MB to 256MB to cover a lot more use cases.
The Apple M1 has 8GB and 16GB nowadays.
Can you name me one ARM board where RAM is not soldered but socketed (SO-DIMM) ?

Alright… I think we have another crazy story from Allwinner.
This is the information I got, but I was told it was not confirmed so kept quiet:

Interesting if somehow the cortex a7s can be turned back on again.
I guess the logic needed to allow the cortex a7s and the riscv access the rest of the hardware without breaking everything isn’t present so it’s impossible to have them all running at the same time. Would be cool if possible though.

Allwinner even with T827 will not compete with amlogic and Rockchip flagship SoC especialy with a very buggy software, but it’s the only affordable SoC maker to offer SMARTCOLOR 3.0 DE Post Processing ENGINE which have no equivalent in Amlogic or Rockchip SoC’s, the only alternative to have decent playback is the 5 years old Hisilicon Hi3798M or the very expensive Realtek SoC’s like RTD1619DR

Why are you going to waste money on an expensive process and the most cutting edge chip designs for chips going into products that are firmly in the “cheap tat” category?
Products where the battery is mounted with a piece of dirty doubled sided type wherever it’ll fit in the case.

An Allwinner intern has just contacted me to ask some questions:

Can I ask you some questions about our company if it won’t take you too long?
1. What do you think of Allwinner Technology compared with other companies?
2. Do you have any suggestions on us whether it is about product performance, publicity, or design?
3. As far as you know, the overall evaluation overseas about our company tend to be positive or negative?

Allwinner has opened an English discussion zone on their forum/bbs:
https://bbs.aw-ol.com/recent?cid=4

Why should customers give feedback to help Allwinner, when Allwinner treats customer support with contempt ?

It looks like they try to improve. At least they assigned somebody to get feedback. But it’s entirely possible management will look at it, and discard it as nonsense 🙂