In order to encourage developers to port their apps to Windows 10 on Arm, Qualcomm and Microsoft have announced the Snapdragon Developer Kit based on a Snapdragon Compute platform and aiming to provide a cost-efficient platform that will be less costly than a laptop.

The development kit looks like a mini PC, and while the full specs have not been announced, it could well be powered by the just-announced Snapdragon 7c Gen 2 processor, itself a cheaper version of Snapdragon 7c. 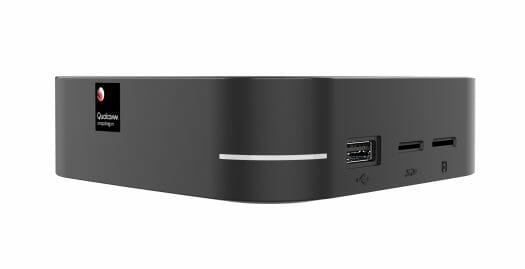 Qualcomm did not share photos of all the ports from the developer kit, but the photos we’ve got come with “QC710” file name, and reveal a power button on the top, an LED on one corner, two USB ports, a MicroSD card slot, and a SIM card socket.

I’d assume at least one HDMI or DisplayPort at the back, and possibly an Ethernet port, but we just don’t know as developers’ resources specific to this developer kit are limited to say the least. 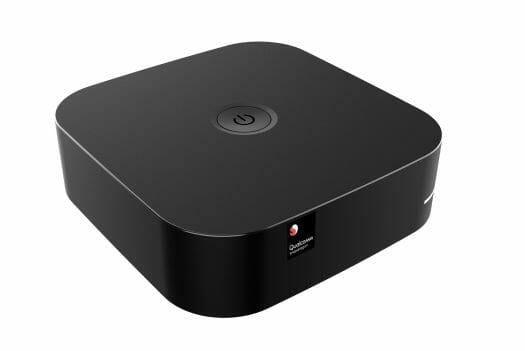 What the companies announced is that Visual C++ compilers and libraries for ARM64 can befound in Visual Studio 15.9 and greater, and native ARM64 versions of many open-source development tools for recompiling, optimizing and testing applications are already available. This includes LLVM, the Chromium framework, the .NET 5.0 framework, MinGW and GCC, Cygwin, Electron, Qt, GTK, OpenVPN, the FFMPEG library, Boost, GStreamer, and others.

We should have many more details to share this summer once the Snapdragon “QC710” developer kit becomes commercially available on Microsoft Store. Some quotes and a few more details may be found in the press release.

[Update: QC710 is now listed on ECS with more details (thanks Cristoffer!) including the specifications: 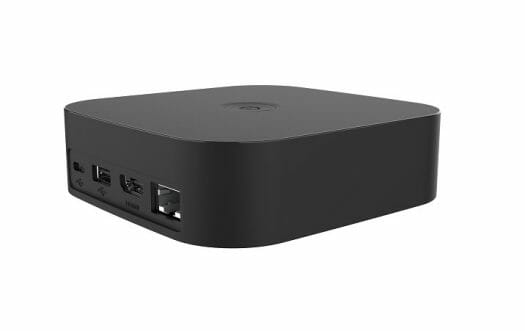 With the developer stack of Win10, Visual Studio, and .NET 5.0, I bet they have to dedicate an entire core just to telemetry!

The session appears to take place on Wednesday (not Tuesday):

It’s apparently made by ECS. I’ve added the specs and link.

I don’t see a power connector anywhere. I guess that USB-C port is for powering the device.

Not ideal, but it’s just a devkit used to develop apps/programs for consumer devices. But I do agree it would have been nice if it was a more capable mini PC.

If you want to convince devs “ARM is great”, I would not give them low-specced hardware.

If they were serious about attracting programmers on cheap ubiquitous hardware, they could officially support the Windows on Raspberry (WoR) project, building on their earlier Windows 10 IoT work.

But they’ve been wedded to Snapdragon since the Lumia days; Qualcomm dev box it is.

And if you think about it the Snapdragon choice becomes obvious: Adreno GPUs support DirectX.

Maybe the newer VC6 wouldn’t run into the same issues VC4 had.

Yes, its not dx12 conformant

The session says “Windows desktop applications”. This is the context I view this device in. For comparison, Apple did the same thing previously with ARM based “devkits” that would become the M1 powered Macs (desktops).

In an apples-to-Apple’s comparison (pun intended), this QC710 device pales in comparison to a M1 Mac mini. Instead, it appears to almost reach the level of RPi4 competitor. Lets wait and see where the price point indicates that MS/Qualcomm believes it targets (IOT/Desktop).

Why exactly? This is a SoC for Chromebooks maybe lacking Ethernet at all in a box sitting somewhere in a cabinet being accessed remotely via RDP/RemoteFX/ICA for which Fast Ethernet is perfectly fine. Does an M.2 slot help debugging Windows applications?

As I understood it the point is providing something less expensive than those ‘always connected’ ARM Windows laptops for app developers.

Since we will be celebrating the end of Summer (Labor Day) this weekend, it appears this thing is entirely “vaporware”. There are no announcements or product listings anywhere to be found.

When I lived in Europe, summer ended on September 20th… I can see ECS posted about the devkit on Facebook a few days after this article: ECS QC710 development kit with #Qualcomm #Snapdragon 7c platform designed to accelerate product development from ARM architecture to Windows software application development.​It provides cost-effective solution enables developer to port a current application to Windows on Arm, or develop it natively for Arm64. ​​More products with Snapdragon 7c will be released soon, you’re welcome to contact us for more details~ ​​For more inforamtion [email protected]​ I’ll send them an email to see what I can get.… Read more »

QC710 will be approximately launched in the US by the end of Oct. through Microsoft channel & online store.

However if you need a bulk quantity (Let’s say 1000 units or above),

we may discuss the details and see how we can do then.

I know “Microsoft loves Linux”, but I don’t think it’s in the plan.
Snapdragon 7c Gen 2 also supports ChromeOS, so getting Linux on the device might not be too hard.

Dev kit with 4Gb? Are you kidding me?

Windows needs more than 4GB…
This isn’t a Linux system.

Just checked: none of the many Windows systems we monitor uses more than 4GB except two machines (Hyper-V hosts). In fact RAM usage got better few years ago with Microsoft implementing transparent memory compression in Win10.

Besides this running crappy software stacks or user behavior (+100 open tabs in a browser) is a different thing. But this inexpensive box here is meant to port/debug own applications. That’s neither a desktop nor a workstation.

That would be low for a workstation, but since it’s a devkit it’s meant to be used as a target device. So development would be done on another machine, and QC710 simply used to run/test the app/program.

It’s not a machine to develop on, but a target to deploy to. In that case, 4GB should be what every developer target because it’s what’s in most low-cost devices. If any app exceeds 4GB RAM, it either should be optimized, or it should obviously be tested on a different class of machines.

In the Build 2021 session (see previous link @ 22m:00s), they briefly show a glimpse of the device. No additional information, pricing, or details were provided. It was not even shown in operation.

Two words were used: ‘low cost’. And the announcement suggests you get a proper Windows license with the box as well.

The most important information Jean-Luc put here; this thing allows for one external display restricted to 2560×1440 pixel. I don’t know a single developer who would sit in front of something that limited display-wise (and that was already the case a decade ago).

Two words were used: ‘low cost’. And the announcement suggests you get a proper Windows license with the box as well. Do you really think this is going to be a $35 product? Otherwise, the term “low cost” is subjective (aka meaningless). this thing allows for one external display restricted to 2560×1440 pixel. I don’t know a single developer who would sit in front of something that limited display-wise (and that was already the case a decade ago). How much resolution do you need to view a 80×24 console terminal? For developers (those that write source code), the only thing… Read more »

Nope (hint: ECS SF20QT3). But not being a Windows app developer I honestly don’t care anyway. 🙂

Wrt devs and displays… I wasn’t talking about HiDPI but display sizes. The devs I know used two 27″ screens (2560×1440 each) already 10 years ago or 30″ + their notebook display. And now they’re sitting in front of ultra-wide curved displays. All they demand is maximum display size to fit as much open windows as possible.