Armv9 architecture was announced in Q1 2021, building upon Armv8 but adding blocks and instructions for artificial intelligence, security, and “specialized compute”, i.e. hardware accelerators or instructions optimized for specific tasks. 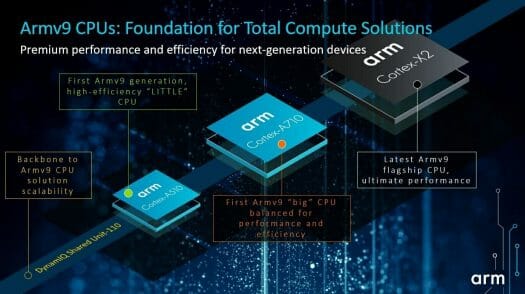 Arm Cortex-X2 flagship core is the company’s most powerful CPU so far with 30% performance improvements over Cortex-X1 and will be found in premium smartphones and laptops. Arm Cortex-A710 “big” CPU core provides a 30% energy efficiency gain and 10% uplift in performance compared to Cortex-A78, while Arm Cortex-A510, high efficiency “LITTLE” Armv9 core delivers up to 35% performance improvements and over 3x uplift in ML performance compared to Cortex-A55 announced four years ago, or about the same performance as the “big” Cortex-A73 cores from just a few years ago. Cortex-A510 cores will be used in a broader range of devices from smartphones, to home appliances, and wearable devices.

Since we’ve just mentioned the “big” and “LITTLE” cores, Armv9 still supports DynamIQ technology where big and LITTLE cores work independently wiuth the same SoC. With Armv9 architecture this is handled by the new DynamIQ Shared Unit, DSU-110, supporting up to 8x Cortex-X2 CPUs. Arm also says all new mobile big & LITTLE cores will be 64-bit only in 2023 as previously announced in Arm Roadmap to 2022, but with one year delay. The company also added its global partners will ensure all apps will have 64-bit support by the end of this year to make the 64-bit only transition a seamless experience for consumers. 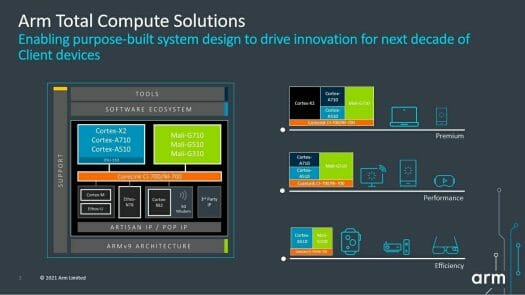 Armv9 SoC’s should be expected in consumer devices by next year. More details may be found on Arm’s CPU and GPU pages, as well as recent posts on Arm community’s processors blog.

I think your roadmap is about right 🙂

No, 2025 is in only 4 years, by then we’ll only get the A78 from RK, and Allwinner will have completely dropped ARM and run off single-core 900 MHz RISC-V seconded by a derivative of a 8051 for power management.

Where will the RPI cores be?

The RPI will have 64 cores but they will be Cortex M0+ and people will lap it up.

And all the GPIO, i2c etc will go through a single usb 1 low speed connection.

Raspberry Pi 5 will almost certainly be 4x Cortex-A75 on 28nm.

Why? They just got on 28nm so they probably won’t go lower anytime soon, and Eben Upton trashed the A73 (which has some regressions from A72) in a blog comment.

do you have a link to the blog post?

“Actually A73 is a bit of a disappointment. A marginal (<10%) theoretical improvement in power/performance/area over A72, but a well-implemented A72 (which we have) beats an adequately implemented A73 hands down.”

> a well-implemented A72 (which we have)

I read somewhere, it would require a Million pound licence fee to add Crypto to their design. The Toaster marketed as RPI4 is a spare parts bin solution. I have no desire to aid or point the solutions out to RPI.

And a Videocore 8 that’s clocked exactly 20% higher than the previous one!

Maybe finally it will be within reach of the lowest end Mali GPU of the previous 2 generations.

I don’t think you can have an A75 (or any later A7x) on 28nm, at least not as hard IP cores. Also, A75 isn’t really enough of an upgrade over A72, unless they double the number of cores, but then the die size and power consumption gets even crazier at 28nm. Cortex-A76 would be the next one that is available as POP IP, but that would require some FinFET process (16nm or below). I’d expect them to stay on 28nm Cortex-A72 for a little longer, and then to move to more (presumably in-order) cores in the future, either Armv9 or… Read more »

Who cares? I will have an RK3588 box in twelve months. This will be good enough for quite some time.

I don’t think they will ever release it. RK3588 is just steam and it’s been since the day they made that presentation. Or maybe they will, in 2024, when the SoC is on par with the very low budget smartphones. It will be released EXACTLY when you don’t feel it appealing anymore.

And the 8051 will be running a RISC-V software emulator because trying to code for the 8051 is like putting your own hand into a meat grinder..

But who could possibly use more than 256 bytes of RAM?

With that said, 8051 was really easy to code for, being a CISC it did have useful instructions like MUL, DIV and others that used to be missing from much more recent cores. Interrupt handling was ugly but convenient and resource-saving. And it was dog slow but BASIC ran on it 🙂

Interrupt handling ugly ? sorry for me the nested interrupt handling of MCS-51 core was a boon , later even more recent 8 bit architectures like AVR etc and not so recent PIC (Mid range and higher architecture) were lacking in this feature .Last decade saw few more enhanced single cycle 1T type MCS-51 cores coming and those again helped retained the old 8051 legacy specially many Chinese MCU vendors now offers hundreds of these new core based MCUs (with lots and lots of other enhanced peripherals )at throw away prices.

Too bad Huawei (HiSilicon) has been locked out. Otherwise we could have a taste of the new cores in their flagship Mate-Series at the end of this year instead, as they were always the quickest to implement ARM new cores.

No? Their SoCs always had older CPUs. They were always the fastest to implement on a new litographs

They were always the fastest to implement ARM new cores until they are not because they were left with only lisence for A76 core (and A55) when ARM stopped all technical relationship with them. Not too long after that they were even pushed out of TSMC. Thanks to Trump for both problems.

The improvements in the low end A510 and G310 are what make me happiest in all of this–as they’re the parts we’re most likely to see trickle down to cheap SBCs. The performance/power improvements in them are the best of the announcement.

If you look into it, A510 doesn’t seem to offer much until it reaches higher frequencies, although that might be acceptable for SBCs. See AnandTech’s article about the announcement.

The Mali GPUs look a lot better but I didn’t pay much attention to it.

We’re still looking at area improvements as well as memory interface improvements for the A510. The dual/cluster thing will be interesting. I see it more as a bridge until people start doing a lot of ML codes. Sharing the vector unit for now and then splitting it in the future. Should provide a lot of flexability for implementors. But probably a pain for us users to figure out what a chip really looks like. 😉

3 ghz SBCs, pedal to the metal.

Sadly, there is no such thing as cheap boards anymore. The old times where you could get one for 20-25€ including shipping are gone. I’ve moved to second hand mini x86 computers for the time being, they cost just a little more than the current overpriced boards(*cough* COVID excuse *cough*) and they offer more versatility. If I have to spend 50€+ on a board, I just don’t do.

Oddly apart from a fab fire and a couple of other problems, there are more chips being made than ever. Demand has rocketed and lead time for being fabbed has gotten much longer. The short term answer, would be to over clock higher and fit a larger area ( heat radiation surface ) heatsink. Medium term, Smartphone SoC design should be more modular, so as the SoC falls from Smartphone market the IP is adapted to HDMI output and TV / TV box. Longer term the phone will be the TV player and Smartphone. Plug the phone into a cradle… Read more »