Unsurv offline is a compact and lightweight board with ESP32 WiSoC, a GNSS receiver, an accelerometer, and NFC capabilities to help developers/users collect and analyze location data in a privacy-friendly way.

Unsurv Technologies initially developed the board to better understand offline video surveillance with OpenStreetMap (OSM) data. It does so by using a database of camera locations from the OSM on the SD card, “counts” surveillance cameras as you walk past them, and you can then transmit data via NFC and visualize it on your smartphone. The accelerometer is used to wake up the board from deep sleep upon detection of motion. The company has now made the board open-source and other applications are also possible. 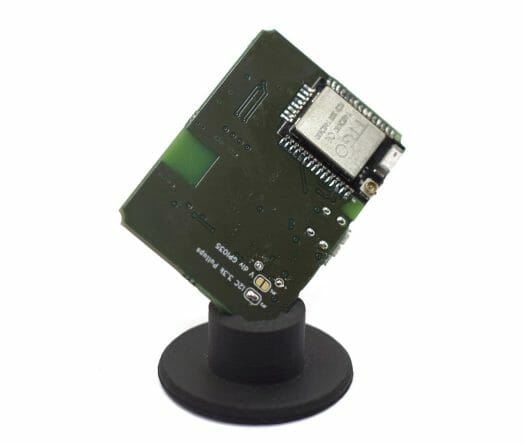 The kit ships with an optional 3D printed case with enough space to house a 300 mAh LiPo battery, but if you have a 3D printer,  you’ll also be able to print the case yourself since all resources including KiCAD design files, software (Arduino sketch), and 3D printer STL files are available on Github.

The best way to understand the primary use case of unsurv offline and how it works is to watch the video below.

Now you might think you do so the same with your smartphone, and indeed it’s possible but there are drawbacks:

Implementing an always-on location service on a smartphone is possible, but comes with certain drawbacks: it increases power draw and might not be sustainable throughout the day. Even worse, it potentially exposes your location to third parties, taking away from the privacy focus. unsurv offline solves for all of this as a customizable lightweight, portable, low-power board with every feature you need for powerful location tracking.

Alternatively, the board could be used as a fitness tracker, location logger, and for mapping the WiFi strength of access points.  You’d think it’s a narrow niche, but Unsurv offline still found some competing solutions to compare it to such as TTGO T-Beam.

Unsurv Technologies has launched the ESP32 GNSS receiver board on Crowd Supply with a $16,000 funding goal. There are two rewards: the board with NFC antenna for $89, and a kit adding the 3D printed enclosure for $99. In all cases, you’d have to source the battery yourself. Shipping adds $8 to the US, and $18 to the rest of the world with rewards scheduled to ship to backers in August 2022.