PiGear Nano is an Nano-ITX carrier board for Raspberry Pi CM4 (Compute Module 4) designed for industrial applications with a -30°C to +80°C temperature range, 7 to 30V DC input, as well as RS232, RS485, and CAN bus interfaces. 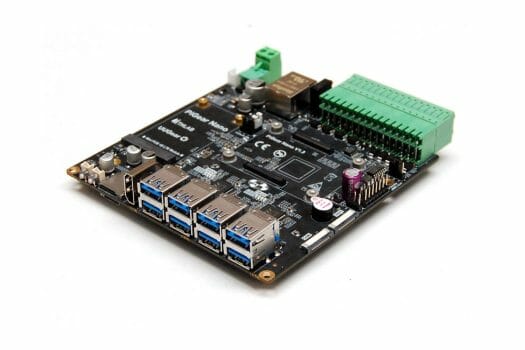 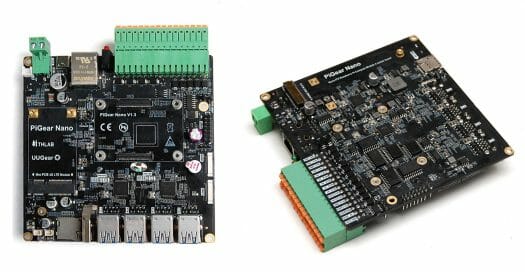 In case you wonder how the USB 3.0 ports are connected to the system-on-module, this is explained in the user manual:

PiGear Nano extends 4 channels of USB3.0 interfaces from the PCIE on Raspberry Pi Compute Module 4, and then extends a PCIEx2 for NVME SSD, a Mini PCIE for 4G LTE module, and also 8 USB 3.0 ports.

That means a PCIe to 4x USB 3.0 chip, two of which connected to two USB 3.0 hubs to bring out the 8 USB 3.0 ports, one to the mini PCIe socket, and the final USB 3.0 port connected to a USB to PCIe chip for the NVMe SSD…

That’s not ideal, but this setup is due to the limitation of the Broadcom BCM2711 processor found in the Raspberry Pi module, and a processor such as Rockchip RK3568 would really shine in this type of board.

I understand PiGear Nano is designed to run Raspberry Pi OS which you’d need to install on the eMMC flash or a MicroSD card (CM4 Lite), and then download and install a script to support all features of the board:

This script makes changes to config.txt file, creates pgnano directory for PiGearNano’s RTC and IO configuration script, and installs UWI (UUGear Web Interface) that allows the user to easily access your board via mobile phone, tablet, or PC.

PiGear Nano Raspberry Pi CM4 Nano-ITX carrier board is available for 169.00 Euros, or about 201.45 USD without module nor enclosure in the company’s store. A kit with a Raspberry Pi CM4 with 2GB, 16GB RAM, and no wireless module, plus a black enclosure goes for €230.50, possibly with VAT since the company, Dun Cat B.V., is incorporated in the Netherlands. More details may also be found in the announcement, and the user manual can be found in the store.

To avoid confusion I would better call this ‘USB attached NVMe controller’ since an awful lot of people otherwise think this board would magically ‘transform’ PCIe to USB and back to PCIe so they could insert any PCIe card into the M.2 slot which is not how this works.

It’s PCIe to USB to PCIe, but it’s quite possible/likely it only works with M.2 NVMe PCIe drives, not other M.2 PCIe cards.

> it’s quite possible/likely it only works with M.2 NVMe PCIe drives

That’s the only mode possible since there exists no ‘PCIe to USB to PCIe’ conversion. 🙂

It’s just a PCIe attached USB3 host controller to which an USB-to-NVMe bridge is attached with an USB hub in between. No way to use generic PCIe accessories and no way to access the SSD with NVMe since all you get is either USB BOT or UAS. The SSD will not only be bottlenecked by the single Gen2 PCIe lane but also by the inefficient protocol, hub inbetween and multiple protocol conversions.

The definition of scam.

Maybe I’m naive, but I’d like to think most people who purchase this type of hardware will understand the limitation of the CM4 module. For example, nobody will think they can get 40 Gbps out of the eight USB 3.0 ports.

That doesn’t happen with sbcs, makers fake their I/O all the time, specially with the amlogic sbcs. And MANY buyers buy those sbcs thinking they have that much I/O.

It’s not just the 8x 3.0 usbs, also the nvme. Everything is fake. A complete scam.

Why not 20 usb 3.0 then? I guess that will be the next carrier board, the new usbs king.

Presumably this board is aimed at system developers and integrators rather than Pi hobbyists?