Hardware platforms based on Atom Z3735G or Z3735F Bay Trail processors were all the rage in 2014-2016, as the processors were found in tablets, mini PCs, and single board computers sold at price points that provided alternatives to Arm platforms that may not be as well supported.

But time has passed and those processors are really slow by today’s standard, so I was surprised to find out some companies were still selling products based on Bay Trail processors with the “MOMO7W” 7-inch tablet powered by an Intel Atom Z3735G quad-core processor, coupled with 1GB RAM and 16GB flash. 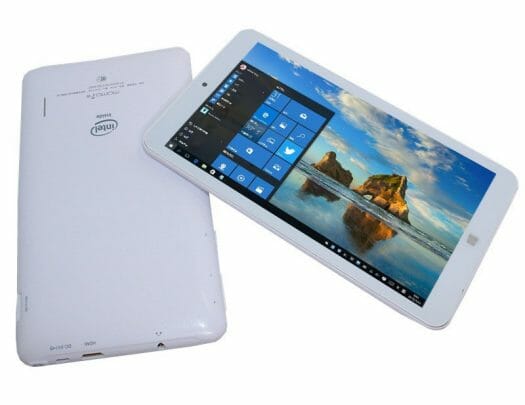 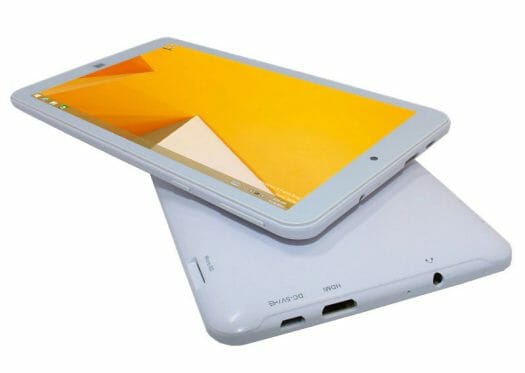 The tablet ships with a charger and a USB cable. It comes pre-loaded with Windows 10, but it should be possible to install Linux distributions as well, as one YouTuber did last year. There used to be issues with HDMI audio in Linux on Bay Trail processors and 32-bit UEFI bootloaders but I understand those have been resolved.

CNX Software condemns child and elderly abuse in no uncertain terms, and I would NOT recommend buying this as a tablet for your child or grandma, simply because it will be incredibly sluggish, and only suitable to run one program at a time. It might still be interesting for people needing a touchscreen display for a human-machine interface (HMI), especially if the software only runs on x86 hardware, or for other single-purpose tasks.

The “PLOYER  MOMO7W” Atom Z3735G tablet was released in 2015, and it’s now cheaper than the larger PineTab Linux tablet, at just $55.27 including shipping but excluding taxes for readers in the European Union.

So you have chosen death…

Shame on Intel for ever producing such a product – it was artificially limited to 1GB by design.

‘e-waste’ even back at release, crippling a 64bit quad core CPU solely for an illusory price point.

Wow. I had no idea 1GB was actually a limit.

Absolutely pathetic. Even in 2014 1GB wasn’t even close to enough.

Even worse, this is abuse against humanity by Intel.
Only masochist buy these crappy tablet.

for other single-purpose tasks.

Only single purpose task for this is as a paper weight.

Would lubuntu work on this? 1GB might just be enough in that case.

I have Lubuntu on a 2GB RAM laptop, and it’s not nice to use

I have Xubuntu on a 2 GB lappy and it’s okay. I have even done some lightweight Python dev work on it

Search makeruseof with ” Smallest Linux Distros ” for some suggestions.

I have a Bay Trail MiniPC with Debian and Xfce. No problem at all to use Kodi or Youtube on Firefox with 1080p videos.

I have a Hyundai Protocol 8x which looks distirburbingly like this tablet with the exception of the HDMI out. It, at least, has 2GB of memory and almost runs Win10 acceptably. I wouldn’t recommend it to anyone trying to get work done, but it can play videos from streaming services and browse the web–as long as you don’t keep too many tabs open. I can’t imagine how horrible it would be with 1GB of memory. Also, the G version has only one memory bank instead of the two that the F model has (my tablet has the F model). That’s… Read more »

Just did a search there are plenty powered USB otg hubs out there !

I must have the wrong search criteria because I couldn’t find any. Any hints?

CNX might not allow links but search amazon, from budget price https://amzn.to/380ZY7I

David,
probably this one will work: https://amzn.to/3KPgkPn

Thanks. I saw that one, but it says “PLEASE NOTE: It can NOT charge any smart phone or tablet.” Which makes me think it doesn’t power the host–I.E. the power it takes in is only given to the downstream devices so the phone/tablet doesn’t have to. Is that incorrect? The reviews and questions provide contradictory infromation–which isn’t reassuring.

According me it can give power to the host, as it should power a nes-classic. Maybe they mean it can’t power a android device in otg mode. I needed something similar anyway so I will buy one and report back.

This one says clearly that usb-otg and charging works on the same time: https://www.amazon.nl/LEAGY-OTG-kabeladapter-verlengingsadapter-smartphone-Transmisson/dp/B07B79WWV2/ref=sr_1_27?crid=1MU0F5MU58IF0&keywords=micro+usb+otg+hub&qid=1650346899&sprefix=micro+usb+otg+%2Caps%2C168&sr=8-27

Looks like there’s some device specific support needed for this. A bunch of posts for the android world suggest that some devices need a kernel modification to use power in OTG-Host mode. This makes sense and an OTG port has two functions–take in power and act as a TARGET *or* give power and act as a HOST. I’m asking it to do a little bit of one and a little bit of the other. There is a sense pin on the OTG connector to tell the device what role is expected of it, but that only has *two* values, so… Read more »

Okay, I tried two different kinds so far and neither of them worked. One of them didn’t even power the downsteam port! I’m starting to think this is a fools errand.

There are 2 other solution you can try:

I don’t know how the two devices I tried are wired. I can take a look inside of the case and look to see if there’s a separate uUSB connector. Thanks for the suggestion.

Does this explain your problems ?

I have the feeling I am about to cut open a mini-USB B cable and start soldering…..

Not bad for use as a HMI panel.

Comparing purchasing a crappy tablet to child and elderly abuse is one of the most bizarre things that I have ever seen written and almost makes a mockery of real abuse.

If it was something written by Fox News or Donald Trump then it would be no surprise but from CNX …?

I certainly agree that nobody should go near one of these unless it is given away free in a cereal box but let’s have some real perspective please.

You’re witnessing TDS. The concept of “relax” has vanished in PhilS.

Talk about not being able to take a joke.

The only sane use case that comes to mind – OpenHAB control panel.

Or any other smart home UI. Home assistant seems more common. Python is much better as a language than those compiled behemoths. The touch screen component for my smart home costs $1500 from the official vendor. Pretty standard 800×480 display, proximity sensor, capacitive touch screen. Would be nice if those could be replaced with cheaper alternatives in the future.

Just as a curiosity, is the Pi4 more powerful than this Atom on the CPU side?

Pi4 has a slightly higher PassMark score. Probably not a good comparison but it’s not where you want your x86 chip.

I have chuwi hi8 pro with 2gb ram i think and fhd graphics. It was not entirely horrible but the issue is cannot update windows because it ran out of disk space. I was not able to get the updates running. I recall booting linux had no touch support and had some stability issues. It is pretty difficult to do anything useful with it.

Well, crappy software is more to blame than the hardware, to be honest. Most of us have known the time where it was recommended to upgrade a PC from 4 to 8 MB to run the fresh new Windows95 well, and those lucky to have 16 MB were extremely happy with quite a snappy system. What has changed since then ? Code quality, horribly sluggish interfaces, and massive availability of memory that serves as an excuse for keeping tons of useless objects in RAM instead of thinking how to access them. Just start firefox 91 on an Atom, wait for… Read more »

Besides people expect improvements in functionality. E.g. latest Firefox can run hardware accelerated video on Wayland in a RDD sandbox. You can’t play HW accelerated H.264 or H.265 at 4k using only 4-8 MB of RAM, but it’s possible when you have 8 GB like in RPi 4B.

I have the exact same tablet with previous gen processor. The build quality is absolute crap, the thing doesn’t charge fast enough for it to run, throttles the cpu hugely and the screen is rubbish, touchscreen doesn’t register fast enough and is inaccurate. Among many other things. It’s just e-waste, Jean I think you have a responsibility to ensure people don’t buy poor quality crock. I’m sad to see you promote such devices, my last purchase was from your website. I feel so strongly about Chinese products the manufacturer sells at a price knowing the quality is too poor for… Read more »

Shame on the person “theukguy” for sending you this to promote, fellow countryman.. that I question is actually from the UK. Where are you?

The real problem here is the SoC. The problem is equally bad with previous and next gen Atoms. Intel couldn’t make them energy efficient. Another problem is, the USB micro connector is pretty bad for conducting current. Tablets can’t use the GPIO pins for powering the device unlike Raspberry Pies. Then again Raspberries have ARM SoC which works much better with limited current.

Patreon my stats class yo

Amazing deprecated 3y yet produced thing.
Sort of a single use thing for drilling in stats mode to teach statistics and accounting and installing a micro bsd kernel that nonetheless acts reasonably as a bluetooth or LoRaWan host. If it charges wirelessly maybe the same teacher will be successful teaching the class to pass on the hardware to the next class

I had 2GB ram tablet like this and I couldn’t get Manjaro running on it so I tossed it a few months back.

It sounds quite decent for that price, similar machines are regularly sold for nearly 200€ or more over there, but Microcenter doesn’t ship outside the US, so unfortunately it’s not really an option for a lot of people. One small note, RAM appears to be LPDDR4 according to what I can gather, which is natively dual channel even hen using a single die.

Throw the money to a 🗑️ and the effect will be same.

You have elected the way of … Pain!

Things that should no longer exist: