Equipped with the nRF5340 dual-core Cortex-M33 SoC, nPM1100 PMIC, and Cirrus Logic’s CS47L63 Audio DSP, the kit can be configured as a True Wireless Stereo (TWS) earbud, an LE Audio USB dongle, an enterprise headset, or a broadcast receiver. 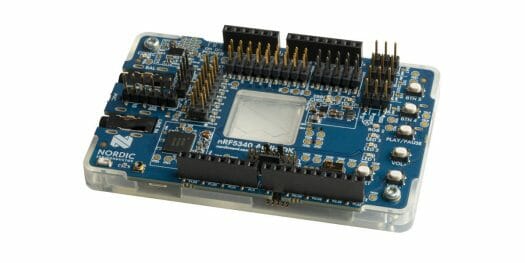 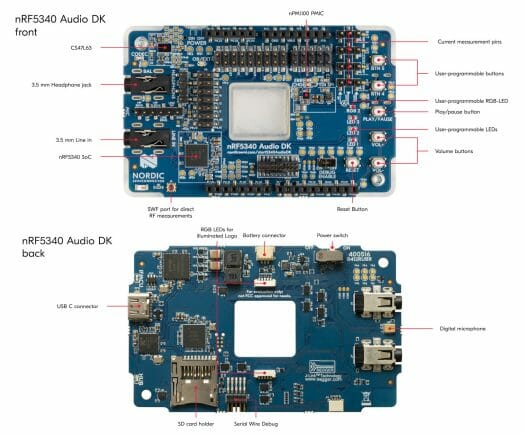 The company specifically made a developer release of the nRF Connect SDK v1.9.99-dev available with support for the nRF5340 Audio DK, which can be used until the nRF Connect SDK v2.0 is released. The SDK supports the development of Bluetooth LE Audio, Bluetooth Low Energy, Thread, and other applications. It integrates the Zephyr RTOS, protocol stacks, samples, hardware drivers, and more. You’ll find resources to get started on the documentation website.

Since there’s basically no consumer hardware for Bluetooth Audio LE right now, you’ll need at least two boards to get started, or even a minimum of three for features like multi-stream and broadcast audio. The nRF5340 Audio DK is available from distributors for about $170, so a complete 3-board kit would amount to a little over $500. That’s not small change, but still a better deal than the $2,000 Bluetooth LE devkit based on nRF52840 SoC that we covered last March.

More details can be found on the product page, and the company will be hosting a webinar on LE Audio on the 18th of May explaining the differences between Bluetooth Classic and LE Audio, the major advancements made by LE audio, and new use cases.

I thought LE Audio was associated with Bluetooth 5.2.

Does it support the optional long-range or high-speed PHYs?