Libre Computer’s latest Ubuntu 22.04 desktop and server images for ROC-RK3328-CC board are based on Linux mainline, namely Linux 5.18.2, and other boards from the company, based on Allwinner H2+/H5 processor or Amlogic S905X, have gotten the same treatment.

Some companies will churn out boards regularly but provide limited software support. Libre Computer seems to have taken a different approach, as they released most of their board in 2017 and 2018, starting with AML-S905X-CC “Le Potato” board based on the Amlogic S905X processor, followed by ALL-H3-CC “Tritium” SBC with Allwinner H2+, H3, or H5 processor, and finally ROC-RK3328-CC “Renegade” board, but still release updated OS images in 2022. 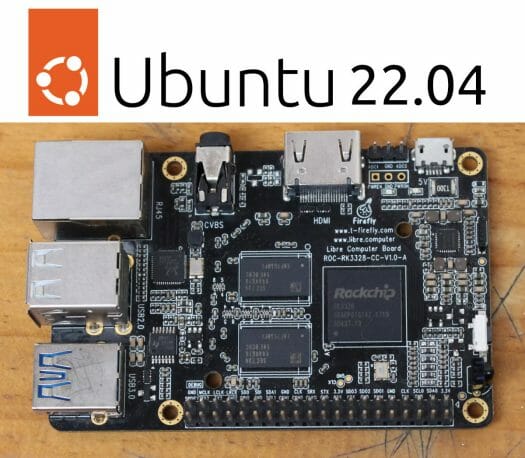 I reviewed ROC-RK3328-CC SBC with Debian 9 and Ubuntu 18.04 using Linux 4.4 in July 2018, and four years later, you might have thought such boards could have become abandonware, but Libre Computer just released Ubuntu 22.04 Desktop and Server image with Linux 5.18.2 (so mainline Linux) for the board.

ROC-RK3328-CC Ubuntu 22.04 Desktop/Server Preview Release with u-boot v2022.07 and Linux 5.18.2. u-boot doesn't have video right now but that will change. That wraps up about every single board we have ever released. #upstream #longtermsupport pic.twitter.com/mWXXNGAYkW

You’ll find the images on Libre Computer server, and as explained in the tweet it’s not only for that board as AML-S905X-CC SBC also has Ubuntu 22.04 Desktop and Server (arm64) images, while the Allwinner boards have Ubuntu 22.04 armhf and arm64 server images. Not desktop.

There’s still some more work to do, and they hope to have deb and rpm repositories up with LTS, stable, and mainline before the end of July to facilitate kernel security upgrades, and more operating systems including Debian, Fedora, openSUSE, and Arch Linux Arm are expected to be supported by the end of August with Linux mainline.

The news will be mostly interesting to those who already own the ROC-RK3328-CC board, as it does not appear to be in stock anymore, although other Libre Computer single board computers are still available on Amazon or LoveRpi. It should also be possible to use the Ubuntu 22.04 images on other RK3328 or S905X boards with some modifications (e.g. Device Tree), although Armbian may also be an option here, but usually with Linux 5.10 or 5.15.

Thanks for the tip, I have one that I’m not using anymore, it could be upgraded to have at least one instance of that distro somewhere.

Hope they will have model with RK3588.

Libre have been so quiet of late.

They seem to focus on software support. It looks like they are using Firefly to design the hardware.

Do they actualy have a support site or a wiki?, all i can find on there site is a download button after you click the buy button.

If you need support and everything else, then you need to upgrade to Armbian.

They have a forum @ https://forum.loverpi.com/categories/libre-computer
But it’s not active, and they did not even bother to update the SSL certificate.