Benjamin VERNOUX has launched the HydraUSB3 V1 board based on WCH CH569 RISC-V MCU as a developer platform to experiment with high-speed protocols like HSPI and SerDes through a USB 3.0 interface.

It’s the third board from Benjamin we feature here, after the STM32-based HydraBUS and the HydraNFC v2 shield delivering up to 1600 mW for NFC charging and connectivity. The HydraUSB3 v1 is quite different since it does not involve NFC at all, and instead leverages the CH569’s high-speed interfaces including USB 3.0 (5 Gbps), HSPI (3.8Gbps), and SerDes (>1.2Gbps). 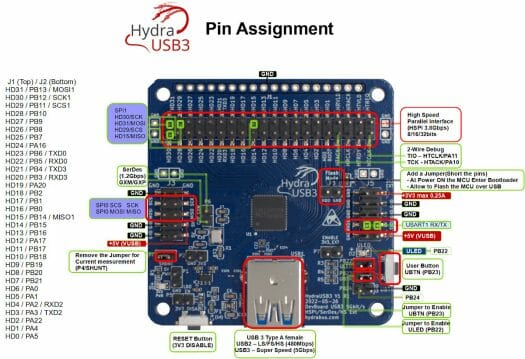 Th HydraUSB3 ships with an open-source test firmware that’s available on Github with source code, examples, and libraries (e.g. libusb) to experiment with USB 2.0, USB 3.0, HSPI, SerDes, and of course, the user LED with a blinky sample. The HydraUSB3 has been tested at more than 330MB/s from the board to the PC Host, and more than 250MB/s from the PC Host to the board.

The board can be interfaced with an FGPA to be used as a USB 3.0 to HSPI or SerDes bridge, and two boards can be interfaced to test “ultrafast” communication and transfer of data and experiment with multi-CPU communication with one board configured as a host, and the other a device using the PB24 jumper. For that purpose, the boards are even designed to be stacked. 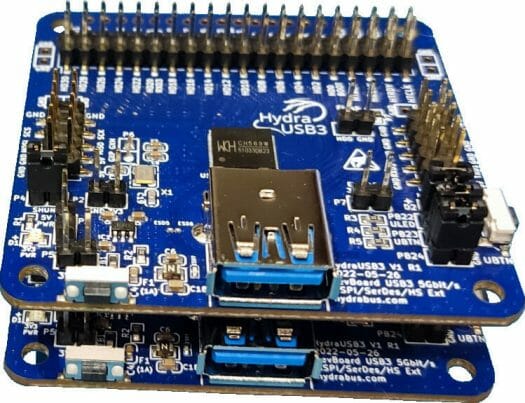 The HydraUSB3 board is sold on Digikey for $59.99, but Benjamin is also selling a kit with two boards on his online store for 120 Euros. You’ll need a USB 3.0 male-to-male cable that is not included, and extra jumpers are also recommended for configuration as explained on the product page.

So more advanced than this ?

More advanced than this too

Other CH569 boards are available too, but do they provide any open-source firmware?

The “CH569 Evaluation Board” on Aliexpress have not the same features and are bigger and they are clearly not the same quality (lacking also ESD protections, buttons…)

Granted, the EVT is bigger, but can you elaborate how you come to the other conclusions? Features comparision: both (HydraBus and WCH569-EVT) are essentially just breakout boards for the exact same chip. Hydrabus has 1 User and 1 Reset button, the EVT has reset only on a pin header Hydrabus has 1 User LED, EVT has 3 User LEDs + Power LED EVT has an external SPI flash, HydraBus has none EVT can be powered via barrel connector and uses switching (Buck) converters, HydraBus only has a linear regulator. Neither has any external ESD protection. Quality is obviously just an… Read more »

WCH CH569 is an interesting product, but with the China-Taiwan … tensions, I wouldn’t be surprised if at some point the Chinese products get banned in North-America, Europe etc. The development of a product is quite time and resource consuming, probably anyone should consider the political factors, before using their products.

Wow, USB3.0 on a microcontroller – that’s a first, isn’t it?
Presumably you can’t actually push the full 5Gbps through it though… or can you? Has anyone done any real-world bandwidth measurements?

Its probably more “USB-Interface Chip” with a microcontroller. Actually, it is not so different to the Cypress FX3 design. The FX3 has a ARM926EJ-S (ARMv5) core, and data is pumped between its 8/16/32 bit external interface (GPIF2) and the USB transfer buffers using one of the DMA engines. External data rate is 3.2Gbps (100 MHz), so theoretically slightly slower than the WCH 3.84 Gbps. The FX2 was somewhat different, as the GPIF directly puts the data from the external interface to the USB transfer buffers (and vice versa). The biggest culprit with the FX3 is the Cypress SDK, more specifically… Read more »