The board also includes two Gigabit Ethernet, plus the WiFi and Bluetooth connectivity from the Raspberry Pi CM4, and the extra features make the board larger (146x50mm) than competitors. But that makes the platform that much more flexibly, and can be used as a gateways for all sorts of projects thanks to the wide range of Raspberry Pi HAT available in the market. 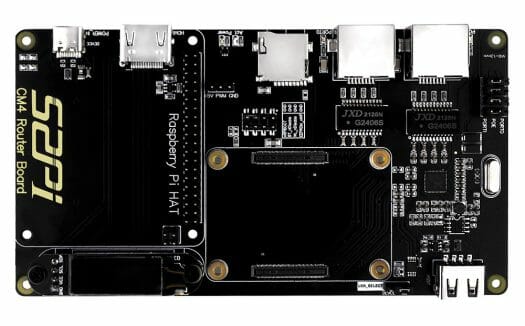 While any operating system supported by Raspberry Pi CM4 could run on the device, 52Pi’s Wiki focuses on OpenWrt for Raspberry Pi and provides an optimized OpenWrt image plus instructions to build it from source. They also explain using Raspberry Pi OS is possible but a few simple tweaks are required for USB 2.0 and the I2C OLED display.

The 52Pi CM4 Router Board is available for $54.99 including shipping on Aliexpress. It is also listed on Seeed Studio for $54.90, but currently out of stock. The board ships with the thick heatsink shown on the first photo, but you’ll need to provide your own Raspberry Pi CM4, 5V/3A power supply, and cables.

Via Liliputing and Notebookcheck.net

how does this board differs from the others? why there is no “standard” router board with at least 1+4 gbit ports 🙁 ?

I think I’ve answered the first question in the post, and for the second, the Raspberry Pi CM4 (and Broadcom BCM2711 SoC) is not particularly well-suited for networking, although one could connect a 4-port PCIe Ethernet switch.

well I might dare to contradict you as it’s top 3 downloaded image on openwrt and the best bang for buck when it comes to gigabit NAT + SQM (qos) although most of the guys there are using usb3 1gbit adapters. So yeah native port + 4-port PCIe Ethernet switch would be well received