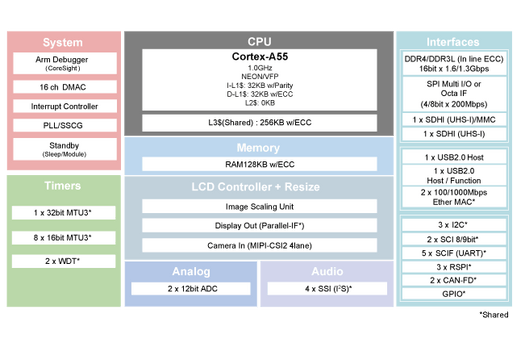 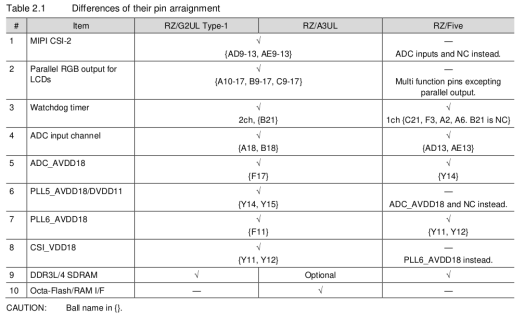 While the company says the RZ/A3UL is pin-to-pin compatible with RZ/G2UL and RZ/Five there are some small difference with notably only the TZ/A3UL having an Octal SPI interface, and the DDR3L/4 SDRAM interface being optional, which makes sense since the chip is meant to run an RTOS and in some cases, the 128KB built-in SRAM and Octal SPI memory may be enough. It should be noted that the DDR3L/DDR4 memory interface achieves a data transfer speed that is approximately 10 times faster than the Octal SPI memory interface, so for higher resolution displays there’s probably no way getting around without DDR3L/DDR4.

On the software side, the Renesas RZ/A3UL supports FreeRTOS and Azure RTOS, and in the case of the latter, Renesas is a license provider of Azure RTOS for the RZ Family, so users can simply download Azure RTOS from GitHub and get started immediately. The company also offers a Flexible Software Package including FreeRTOS and HAL (Hardware Abstraction Layer) drivers, and an “extensive suite of middleware” is also touted for both operating systems.

As mentioned in the introduction, Renesas also designed a SMARC 2.1 SoM compatible with the to help with the US222 carrier board for the development of Human machine interfaces (HMI), embedded vision applications, barcode scanners, and industrial gateways.

Renesas says the RZ/A3UL Cortex-A55 microprocessors and development tools are available now, but the only part I could find in stock is the R9A07G063U01GBG#AC0 without DDR interface. Chip1Stop (Japan) sells the part for $10.8 for one piece, and $8.05 for 10 pieces or more. Renesas did not provide volume pricing guidelines. Additional information may be found on the product page.

It’s not necessarily the BW of the DRAM interface that you’ll need for a 1280×800 display, it’s just the actual amount of memory. 1280×800 is around one megapixel, so that’s 3MB for a 24 bit buffer. You’ll probably want two for double buffering, so we’re already up to 6MB. Even if your buffer is BW, that’s still 128K per frame buffer.

Can you explain about compiler and environment extension editor?