The new dongle is an alternative to the popular Texas Instruments CC2652P-based Sonoff Zigbee 3.0 USB Dongle Plus, also known as “ZBDongle-P”, with a more compact design, and many of the same features. 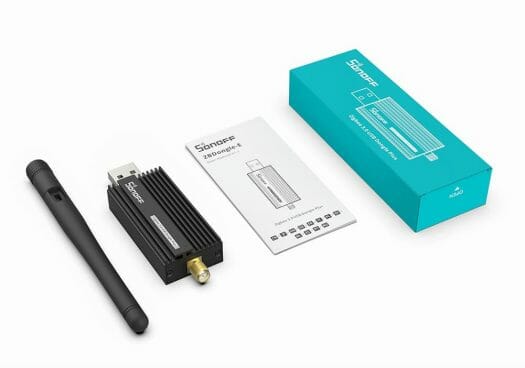 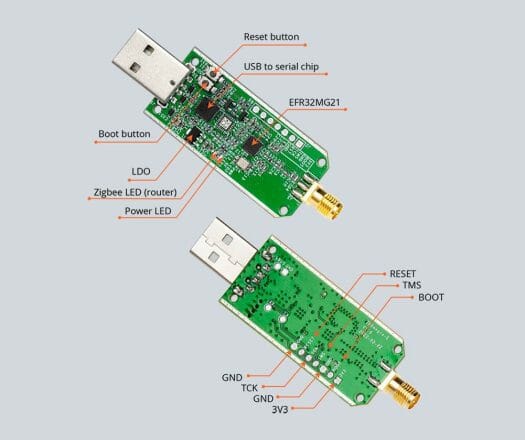 The ZBDongle-E Zigbee 3.0 USB dongle is pre-flashed with Zigbee coordinator firmware based on EZNet 6.10.3 and works out of the box with Home Assistant‘s ZHA integration, Zigbee2MQTT (a.k.a. Z2M – update: EFR32MG21 is not recommended with Z2M, see comments section), IoBroker, OpenHAB’s ZigBee Binding, the Zigbee Plugin for Domoticz, and finally Zigbee Plugin for Jeedom. The Zigbee 3.0 adapter is compatible with ITEAD’s Zigbee router and end devices and should also work with Zigbee 3.0 hardware from third parties.

The Silicon Labs EFR32MG21 microcontroller also happens to be used in the upcoming Home Assistant SkyConnect USB Stick, ITead’s Sonoff ZBBridge and the ZB-GW03 eWeLink Ethernet Zigbee Gateway, so software/firmware should be pretty good for home automation projects. The dongles are used as Zigbee Coordinators by default, but they can be used as a Zigbee Router device if flashed with such firmware instead, and we’ve also been told the OpenThread/Spinel Radio Co-Processor (RCP) firmware would enable the Thread network protocol and support for the Matter standard.

Since the Silicon Lab (ZBDongle-E) and Texas Instruments (ZBDongle-P) Zigbee 3.0 adapters offer different compatibility and price range. ITead will now sell both of these so that DIY users can have more options. The ZBDongle-E is now sold for $19.90 (10% discount with coupon CNXSOFTSONOFF), while the ZBDongle-P is currently out of stock, but used to go for $9.90.

I just wanted to talk about the RF power levels in this article as they’re bothering me. dbm means Deci-Bells relative to 1 mili-Watt. db is generally used to specify relative intensities of signals, so it’a great for specifying gain (when thinking of it in terms of multiples/logrythmic makes sense). dbm is different as it has the reference value (1 mW) built in, so it’s *not* a gain, it’s an absolute power level. So labeling things ‘gain’ and using dbm doesn’t make any sense.

Sorry, I’ve been doing these in my head for too long, I didn’t write it out. I hope your post helps people with different experience. Thank you.

I already have this dongle. Hardware looks really decent and the Zigbee range is even better than the ZBDongle-P. However open-source software support is still experimental and a few things like Zigbee Green Power do not work yet with zigbee-herdsman (current status is here: https://github.com/Koenkk/zigbee-herdsman/issues/319).

This chipset version is not recommended for Zigbee2MQTT

Not quite yet but it actually will be very soon as the developers of zigbee-herdsman that it depends on are planning to remove the ”experimental” label from Zigbee2MQTT very soon as they feel it stable enough now, see https://github.com/Koenkk/zigbee2mqtt/discussions/13373

You all rock with the deets, thanks.

Am I the only one who read the subject and thought to himself, “why do they need USB 3.0 for Zigbee”?? 🙂

No, and in fact you should avoid using a Zigbee radio adapter in a USB 3.x port and instead use a USB 2.0 port or connect via a powered USB 2.0 hub so it has been converted to USB 2.0 in order to avoid interference from USB 3.0 as per https://www.usb.org/sites/default/files/327216.pdf