One would have thought the royalty-free AV1 video codec might have killed licensed codecs such as H.266, but it’s clearly not the case, since Realtek decided to launch the RTD1319D processor with the new codec, and the primary reason may be because the H.266/VCC codec was added to the DVB specification last February for both 4K (3840×2160) and 8K (7680×4320) resolutions. 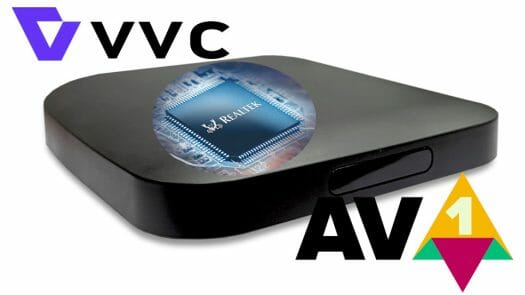 Realtek says the chip will offer an “enhanced Android TV Leanback UI performance” and can be used in 4K UHD set-top boxes in combination with Wi-Fi/Bluetooth combo chip from the company, together with its Bluetooth remote control unit solutions.

Sadly, Realtek did not provide the complete details about the RTD1319D processor which was demonstrated at IBC 2022 on September 9-12. But one would think it could share at least some of the specifications from the Realtek RTD1319 SoC with a quad-core Cortex-A55 processor, an Arm Mali-G31 GPU, and Gigabit Ethernet networking given the similar naming convention, but only time will tell. Availability is unclear too, and I would only expect to gain more information about RTD1319D through the launch of customers’ devices based on the processor since there’s not even a product page for the RTD1319 announced two years ago…

Thanks to Dave for the tip.

I’m fairly certain that at least for the online content, H.266 is dead on arrival. Basically all of the major online video distributors are AOM members. Seems like broadcasters might end up using H.266 for broadcasts since it was added to DVB first though. I hope DVB adds AV1 to it’s codecs specification, as work seems to be ongoing there, and I really hope that the costs of H.266 will encourage broadcasters to use AV1.

AV1 has hardware decode in a bunch of devices already (basically everything after 2021). This is the first device with H.266 decode that I see.

As for hardware encoders, Google had AV1 encode chips for a while for Youtube. But of course, Google doesn’t sell them. But if you want something to buy, Intel GPU’s already have AV1 encoders, and upcoming NVIDIA and AMD ones will likely too. You can get AV1 encode IP today.

To close discussion, because it is hard to discuss with fanboy and troll, I recommand you to read this test from BBC Research Lab: https://www.bbc.co.uk/rd/blog/2019-05-av1-codec-streaming-processing-hevc-vvc Yes AV1 could propose better quality, less than 3% (HD or UHD1) compare to H265/HEVC, AND it is not in realtime. The work of BBC Research Lab was on Codec Model, so the core codec. It is same from MSU Lab on Codec Fight About AV1 and 8K on mobile phone or TV, many years before lot of fanboy/troll said HD (on smartphone) and 4K (on TV and smartphone) are no necessary… About AV2, maybe… Read more »

Whatever benefits H.266 brings will probably be matched by AV2 within a few years.

I don’t think many people care about 8K. I would like to see high resolution 360-degree/panoramic content take off, which H.266 supports.

It would have been earlier but Qualcomm are a backer of H.266 owning a number of its patents they have deliberately avoided integrating AV1 support into their hardware.

Given Qualcomms massive market share of the phone market that is why its been missing,

Mediatek do have AV1 support in their phone chips but they dont get many design wins.

I’m aware of the Qualcomm problem, but we’re talking about AV1 encode, not decode.

I think the thread may even be about real-time AV1 encoding. If a live event (like a football match) is broadcasted, the hardware needs to encode fast enough.

Broadcasters will use expensive boxes to do their real time encode like they always have. They don’t need to rely on comsumer encoders. They’ll always be using purpose built insanely expensive encoder boxes like they have for decades. Slap enough high end FPGAs and memory in a box and sell it for a huge price. That’s been the model going back a long time. I have a board for an MPEG2 encoder. It’s just one of many from the encoder. It’s got 11 huge FPGAs on it. When new, the chips cost over $1K(USD) each. There were several boards in… Read more »

8K is dead in the water nobody is buying it, not to mention sky rocketing energy prices, TV’s that guzzle power for barely perceptible image improvements are not going to be desirable.

AV1 is what most of the online industry will move towards, for those with deep pockets and willing to pay H.266 could see limited use like in Apple iTunes provided you have Apple hardware to decode it but that is a very small part of the market.

Well there was not the infrastructure for 8K a while back, even though seller tried to push the tech. Some countries do limited 8K but that’s not a world wide market. I have a very large 4K TV but even HDR 1080p looks like you are are looking through a window at someone in the room with you. So apart from visual geeks 8K ain’t needed.

Cheap TV boxes do AV1 and you can buy or use free AV1 encoder, decoder software for your PC. So on-demand streaming is covered.

one thing to be pointed out, AV1 and H.266 are not equivalent, in fact I like AV1, it’s a fantastic codec that revolutionazing Youtube Streaming right now, But AV1 is barely equivalent to HEVC, H.266 will be about 40 to 50% more efficent that HEVC, so it’s a far more superior codec, we are waiting just for the release of the x266 implementation before it really kicks off

It’s more efficient, but more evil. Hopefully AOMedia can get AV2 out the door fast. Too many cooks in the kitchen?

Broadband networks struggle with high 4K demand as it is. Your eye does not even see in 4K. It is a Marketing tool simple.

Not sure how your mini rant is relevant. If the people are demanding 4K, 8K, whatever, then better codecs will reduce the burden. Those resolutions are relevant to VR at least.

You can set up your own retro streaming site with 480p max resolution if you want, use the best codecs available (AV1 compresses ~30% better than VP9 at 360p/480p according to Facebook Research), and your operating costs will go down. Or you can serve video to more users at the same time.

Not sure how your mini rant is relevant. Facts are facts.

Yes you should get help for it.