The manufacturer of Orange Pi boards, Shenzhen Xunlong Software, has formally announced the release of Orange Pi OS based on Android with a Windows 11-styled desktop that we are told can also be switched to macOS look and feel, and offering features typically found in desktop operating systems such as multi-window support.

I understand the current release of the operating system works on Orange Pi 800 keyboard PC and the Orange Pi 5 SBC should also be supported once soon. We’re told Orange Pi OS is based on Android 12, but that may be an error since I’m not aware of an Android 12 SDK for the Rockchip RK3399 processor. The company plans to release an Arch Linux Arm version named Orange Pi OS (Arch) as well as an Open Harmony variant called Orange Pi OS (OH) next year. 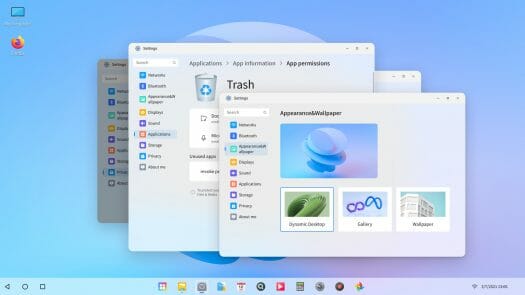 The company explains the goal of the OS is to make it more suitable for desktop use cases, especially for users already familiar with Windows 11 (or macOS in the future), while still enjoying the broad range of apps available to Android.

The company has a dedicated product page, but it lacks details. As far as I can tell, the only way to try Orange Pi OS at this time is to get an Orange Pi 800 keyboard PC. The OS image can be found on the download page of the company’s website.

Looks potentially promising and the inclusion of the Play Store will make it more attractive.

I hope that it will run in 64 bit mode so that the most can be gotten from it.

I hope that their new Pi 5 board will come with a fully working version.

This is an Arch Linux based distro but have Android compatibility layer installed out of the box from the description of the page. So not an Android based OS.

I think the product page is outdated. The company told me they have three versions based on Android, Arch Linux Arm, and Open Harmony. Only the Android version is available right now.

Wow, that’s interesting. This is a bad marketing strategy to call 3 totally different OS that not even run same applications under the same name.

> I think the product page is outdated

I think the ‘product page’ is just a typical collection of marketing BS that makes no sense anyway.

Writing for example ‘Orange Pi OS(Arch) … is highly compatible with open-source graphics drivers’ can only be done if you’ve neither an idea of what an OS is nor what drivers are.

It’s funny, my use case for Android on the desktop is precisely the reverse: people who have no experience w/ Windows/MacOS but a lot of experience w/ Android on their tablets and phones. I want the exact opposite: the same UI as on a phone, and, especially, no resizable/overlapping Windows since those are very confusing.

That’s funny because the first thing I hear from people switch away from windows to linux is “how finally, that feels different, good riddance” and the seek to *get rid* of the windows look-and-feel. So here it looks like they’ll have the worst of the two worlds: painful windows-like interface with less drivers and software choice than if they were on windows. If they want windows give them windows, they’re not going to have consideration for the underlying hardware nor resource usage anyway. And as a bonus point, they don’t depend on you when they need help.

Maybe you know the ‘wrong’ people? 😉

More seriously: if someone decides to drop Windows for Linux on PC hardware the reasoning behind might be quite different compared to people who just want to buy cheap (and either don’t want or can’t afford a PC worth hundreds of bucks). At least that’s what I observed in various SBC forums: people just wanting to pay as less as possible for hardware while using what they’re used to software-wise.

Regarding the price bias that’s a good point indeed. However, reading “decides to drop windows” sounds strange to me because before dropping it one would actually have to install it 🙂 Recently I faced a situation where I needed to access a windows machine (it was a year ago to unbrick my Stationpc-M2 thanks to the lovely rockchip flash utility that bricked it and the support wanted me to try the windows version), and that turned amazingly difficult to find someone with that OS around me. I’m serious. A friend had one in a VM so we could try. And… Read more »

I see the Orange Pi 800 as a great computer for Kids and Teens, but raw Linux is a little too complicated for most of them. This combines the stability of a Linux/Android OS with the advanced features of Windows, and Android’s Simplicity. It sounds like a great combination… I would love to give it a test drive if someone could create a VM/Emulator to run it.

I remember something like Orange Pi getting state sponsorship, that’s why their prices are/were so low. This can be concerning when using their software…

Nowadays, everybody spy on you. Microsoft, Google, Apple, Facebook, Instagram, etc.. etc.. So, add one (if that’s true) to the list is not that big a problem.

Or you can monitor their internet traffic, check whether it’s ping back to their mothership.

Fwiw, I’ve never heard Even Upton wants to spy on you. Even though they’re the market leader in the SBC segment

FYI. Months ago Eben Upton’s Rasberry Pi Os silently added microsoft repos. Many linux users were very upset and against that.
You may check the web for more info.
A sample here:
https://www.cyberciti.biz/linux-news/heads-up-microsoft-repo-secretly-installed-on-all-raspberry-pis-linux-os/

It was not exactly a secret though. They had announced Visual Studio code was added to Raspberry Pi OS a few days before that “breaking news”.

I remember when Android Desktop Distros where all in rage a few years ago.
Then using them was a pain because a lot of apps were made just for phones and didnt worked properly in Desktop mode.
And with ChromeOS being able to run Android Apps, made those Android Desktop kinda useless.

Still, it makes sense why they make one of these, since lots of chinese SoCs have great support for Android but sucks on Linux.

It was Remix OS who brought successful desktop Android to people. The Remix mini was to under powered ( Allwinner A64 ). The jide Remix OS was on X86 and Arm. Jide planned a RK3399 games machine but a company paid jide to go private as jides software could save the company millions in licence fees. Jide paid the RK3399 game machine funders back.

I’ve bought a ChromeBook to check what it’s about, and I wouldn’t recommend ChromeOS to most people: it’s full of glitches and weirdness – it has crashed in 6months more than my Windows PC over the last 10 yrs (HW glitches excluded ^^); there’s no hourglass which would be fine if things were speedy, not when it freezes for 15s w/ no feedback the native ecosystem is scarce and subpar. Even the Media Player called… Photo (a nice, user-friendly start…), has issues with files nobody else has issues with, doesn’t support swipe to adjust volume/brightness… Android integration is so-so, startup… Read more »

Downloaded the image, prepared an SD Card and it does not boot on it.

I’ve said before and got called things, for having said. The cheap hardware illusion is made up for by, software struggles, but don’t worry you will be told, as a customer it is your fault, your are to dumb.

From my point of view: I do not think about cheap hardware, it’s just a part of my time devoted to test things. I ‘ve tested a lot of products from Orange Pi and wanted to compare the Pi800 with the Pi400.

Tested the Pi800 with Ubuntu and Manjaro, but not convinced for the moment.

Typical Chinese / Asians who like to do plagiarism and steal ideas from original software makers. Just like Oppo who design like iPhone and now this one.

Ha? That’s Stereotype. Do you know how desired Elon Musk want to copy Wechat to Twitter?

As someone who develops device drivers for various platforms, I regularly switch between Windows, Linux, and Android. The “desktop” solution is perfect because I can launch several VM iterations, to check connectivity, environment variables, and what functionality does or does not port. In point of fact. Products like WUP (Windows Universal Platform) are closing the specific hardware issue across many areas, not just hardware. I think that soon we will see “universal apps” with hardware specific security and specialty functions only. Whether this works will depend on the users, but as a paradigm comes closest to open source, for transparency… Read more »

Btw. I use leaner OSes, like Linux, on older hardware to restore speed and functionality. This approach always works and when combined with certain hardware upgrades, will provide years of trouble free holiday dinners. Etc.

Good day, can this be installed on a laptop, I would love to see how it works. I’m loving it already

It’s only for Orange Pi devices. The only laptop that may work is the PineBook Pro since it’s also based on a Rockchip RK3399 processor, but even in that case, the image would probably have to be modified.