There’s now a Raspberry Pi 400 alternative with the Orange Pi 800 Keyboard PC that offers a very similar design, but it is powered by a Rockchip RK3399 hexa-core Cortex-A72/A53 processor.

Like the Raspberry Pi model, the Orange Pi 800 comes with 4GB RAM, Gigabit Ethernet, dual-band WiFi 5 and Bluetooth 5.0, two USB 3.0 ports, and one USB 2.0 port, but it also adds 64GB on-board flash storage and features one full-size HDMI port capable of 4Kp60 resolution plus a VGA port, instead of two micro HDMI ports. 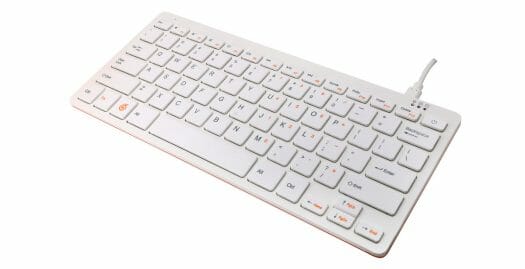 The product page says the keyboard PC can run Android12.1, Orange Pi OS, Manjaro OS, Ubuntu 22.04, and Debian 11. “Orange Pi OS” is described as a lightweight operating system based Arch Linux Arm that will support all Orange Pi hardware including Orange Pi 800 on the website, but the store page says it is compatible with Android 12 and comes with the Google Play store.

The supported operating system images are not available for download yet, but should eventually show up on the Download page on the Orange Pi website, and hopefully, there will be images released by the Armbian community as well.

The Orange Pi 800 is now available for $99.00 plus shipping on Aliexpress, but you might want to get the $108 bundle with a 5V/4A power adapter instead [Update: It’s also listed on Amazon US]. Considering the Orange Pi 800 does come with 64GB eMMC flash storage, it’s somewhat competitive against the Raspberry Pi 400 keyboard PC which was launched for $70, and could provide an alternative to advanced users. Note that the Raspberry Pi 400 keyboard PC now seems to be out of stock in most shops, and is often sold as part of a $100 kit with a mouse, 16GB microSD card, HDMI cable, and a programming book, or even more on places like Amazon.

Update: The article was initially published on June 4, 2022 and updated following the availability of the keyboard PC on Aliexpress.

That headline got me.

It also has a headphone jack, something that is missing on the Pi400. As well as “speakers”.

Where is the integrated microphone?

but is now almost sold as part of a $100 kit with a mouse, keyboard, cables, and programming book.

They sell the 400 with an extra keyboard or are there people charging extra for the ‘keyboard’ part of the 400? 😉

Integrated Mic seems to placed aboufe the ESC Key on top left, so on the other side of the speaker, that is places in the right rear. But left if you look to the rear.

I hope they also make an azerty version

No response about an azerty version of this keyboard… what a pity !

I hope they also make an azerty version

I have yet to meet a keyboard that resisted moving the keycaps around.

You could just put your fanless SBC to the left or right of a normal keyboard. Just like when computers had disk drives. Several other options too.
Could be a all in one thin client.

On the product page, the picture advertising “4K HD video output” is funny.

Chromium OS is good choice since it is lightweight and optimized for this level of SOC. But why not use type-c with DP-alt mode?

It requires extra HW. It has lacking support in mainline Linux on RK3399.

So it’s for the best.

The dumb solution is much more accomidating to actual hardware in the field.

Compared to mini/micro HDMI I would prefer USB-C anytime, also you can connect 2 monitors via a single USB C DP, at least with laptops that is the way it works.

Yes, as someone who has almost all HDMI cable sizes, I fully agree. Death to any non-full size HDMI ports. If you want to go smaller, use USB-C alt DP mode.

Yes all my adapters i had so far broke.

They were too afraid of changing the size to do something cool like offer real PCIe expansion, which to me would properly capture the expandability and excitement of the C64s and Tandy CoCo style of home computers the RPI foundation was trying to emulate.

Instead just another RPI clone without innovation. Great job Xunlong

It’s orange pi, their focus used to lie on cheap, but somehow it doesn’t work out anymore in the current supply chain environment.

If it is anything like my experience with the Orange Pi Win, it will be a pile of junk. Support will be very lacking. In comparison the RPi 400 is rock solid, support groups everywhere and troubleshooting advice all over the internet. Lack of 3.5mm audio jack not an issue as a USB DAC works out-of-the-box. Nice copy of the RPi 400 but I’ll give it a miss.

Yea David M I had a similar experience with a orange 8 core device that was supposed to be a pi competitor/upgrade at the time. But it took me two days to boot it then the district gave me fits…my pi 400 will stay…as will my 8 node pi cluster, and numerous pi zero 2ws.

The only older and somewhat popular SBC with eight cores are FriendlyELEC NanoPC T3+ / NanoPi Fire3, Hardkernel ODROID XU4/HC1/HC2/MC1, Khadas VIM2 and SinoVoip Banana Pi M3. So while OrangePi would easily qualify for horrible OS images and ‘software support’ this time it must have been SinoVoip to blame (even if ‘took me two days to boot’ is more a symptom of failing to write an OS image correctly to SD card 😉 )

There’s no easy response to this. RPi has a limited memory bandwidth, and for some use cases, overclocking it to 2 GHz will bring very little gains. RK3399 has a significantly better memory controller but many boards do not seem to exploit it well, and it may even run at a very low frequency (as low as 200 MHz was found in a TV box). There are too may little cores on the RK3399 (and additionally they run at a low frequency), making them often difficult to use in the general case, though for embedded usage it can make sense… Read more »

and $17 s&h … bad offer. I will go with rock 5b 16GB rk3588 next week for almost the same price. Different product but makes more sense

You must be in Europe where Aliexpress adds VAT.
The rest of us living in the free world don’t get that 😉

For me Amazon USA says it will be released Sept 30Th. For the cost, unless you need the gpio, they buy a refurbished PC with a warranty gives better bang for bucks.

I think an N2+ and a keyboard would be a much better prospect.

The edge some Arm SBC played was low power use but a good PC will finish intense work faster. No one in real world spends all hours running benchmarks headless. Today’s must have, will be, passed by.

I can buy a refurbished Linux capable Chromebook with warranty for less.

Your money, buy your N2+

It would be nice to be able to use the keyboard as a passive device for another PC when it is powered by the USB-C connector.

Why, what advantage does that give? Please inform.

If you want to spend $120 to use it to replace a better $10 dollar keyboard, it’s your money

Since it relies on the USB gadget driver it might be feasible on the Orange Pi 800 too.

I would be interested how did they managed cooling of the soc or actually how much time does it take before it completely melts down when it runs on 100%. It could be nice ergonomic keyboard if the soc is situated in the centre of it.