Gowin R86S (aka GW-R86S) is an affordable Intel Celeron N5100 or Pentium N6005 Jasper Lake mini PC, router, and firewall appliance with 2.5GbE and 10GbE networking that sells for $310 and up on Aliexpress.

10GbE used to be reserved for the enterprise market due to the cost of hardware, but costs have gone down a lot as illustrated by the Gowin R86S system with up to three 2.5GbE ports, two 10GbE SFP+ cages, as well as ports that you would typically find a mini PC such as HDMI 2.0 video output, M.2 socket for NVMe SSD, two USB 3.0 ports, and a WiFi module. 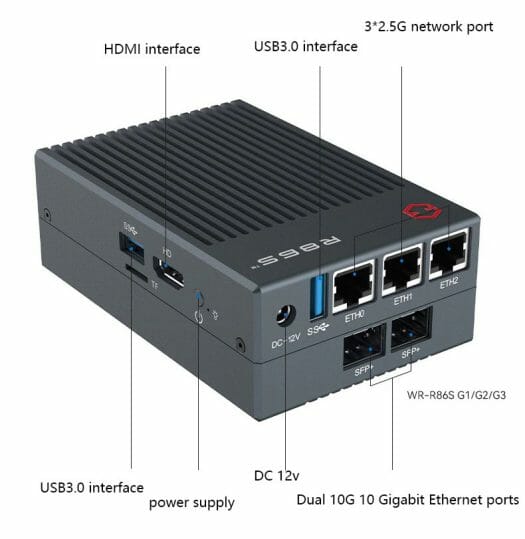 The system comes pre-loaded with OpenWrt, but the company also lists Linux, Windows, Ubuntu, Proxmox, CentOS, and pfSense operating systems. Five SKUs are available with the G-Series adding SFP+ cages which are missing in the P-Series models:

We found out about the Gowin R86S through ServeTheHome where Patrick Kennedy reviewed the GW-R58S G3 model with OpenWrt, pfSense, OPNsense, Ubuntu, Proxmox VE, Windows, and VMware ESXi 8. The network performance, tested with iperf3, was great just as advertised with the throughput maximized at 2.5Gbps and 10 Gbps speeds, but it is worth noting that the SFP+ cages don’t seem to work at 2.5 and 5Gbps, so only 1Gbps and 10 Gbps are supported. Overall, Patrick was really happy about the device, barely larger than a Raspberry Pi 4 mini PC, with downsides including mostly the fan noise and the Intel Pentium N6005 may become a bottleneck for some workloads. People who prefer video reviews will find one embedded below.

That’s a good deal. Very roughly comparable (in specs) with the mcbin with the same price tag, but a bit more modern and with a bit faster CPU that will deal better with heavier workloads and packet rates. Looks like the 10G NIC is a ConnectX4, which is pretty good.

Hi Willy,we are proud to design such compactable but strong model!

That is 8 and we have made the N6005 series more than 3K,working well.

I stand corrected(*) and the 2 x 10GbE SFP+ enjoy 4 PCIe lanes which totally removes the concern about supporting simultaneous 10GbE traffic on both ports.

I got one few months ago, not thought about it as something new what I should suggest as a news item 🙂 Nice little beast. To answer few questions in comments: Device have site (cn version have more info) and github repo, but a lot things targeted to China, i.e. in Openwrt I found some “accelerators” and links to chineese only forums (firewalled to outside world). Dual SFP+ cages connected via PCIe x4 lanes (FPC1). FPC2 have 2 PCIe lanes + USB + SATA. EMMC and RAM are soldered. LEDE firmware is not old fork of OpenWRT but some chineese… Read more »

Hi there,thanks for support.We plan to launch the international version with Pfsense and Opnse or No OS barebone.

Would this do 10gigabit NAT and very basic firewalling between the two SFP+?

I have a Mikrotik Rb5009 as uplink but OMFG, routeros7 is weird… [it also does not really reach wirespeed]

NAT speed doesn’t depend on the bit rate but the connection rate and, to a lesser extent, the packet rate. I think such a CPU would have no problem reaching 50k connections per second with NAT enabled, and forward a few Mpps, but not much more.

Well then let’s assume it’s mostly 1500b packets… Though perhaps it doesn’t matter, as the I can’t go above 2.5gbit (mostly even just 1gbit) per client due to the wiring…

Depends how you connect them, you’re having two 10G links and they could even use 802.1q to a switch and permit any combination of incoming and outgoing bandwidths to a number of clients. Note, I’m assuming you mean 1500B packets (bytes) and not 1500b packets (bits). If so, at 10 Gbps, you get roughly 800k of such packets each second in each direction, that’s very low. I used to *proxy* that with 25% of a core on a core2duo machine, and the macchiatobin does’t need much more to do the same. I have no doubt these CPUs will not suffer… Read more »

I believe the Wi-Fi adapter is actually soldered down to the board. It isn’t an M.2 module. Correct me if I am wrong, please.

Yes, you’re right. The AX201 is indeed soldered to the R86S G3 model based on STH’s review photos, but the P1 and P2 SKUs are listed as having an “2230 WiFi card slot” on Aliexpress.

Respect！！Thank you for the blog

Hi Jiri,you are right.But the M.2 slot for Wifi was design on model GW-R86SP series

I’m very much in the market for a pair of the G3 series model but would like to see an option where I provide my own OCP 2.0 NIC as I have plenty of these from my own stock.
Very good package nonetheless.