A few days ago I showed some unboxing pictures and videos for Jynxbox Android M6 and Jynxbox Live, followed by Jynxbox Android M6 review, and today I’ll quickly review Jynxbox Live, an Android TV Box that based on Rockchip RK3066 (full specs available in unboxing post) that can stream over 200 live TV channels after install a Live TV app / crack, and happens to cost a “mere” $350 allegedly because it give access to these live TV channels. 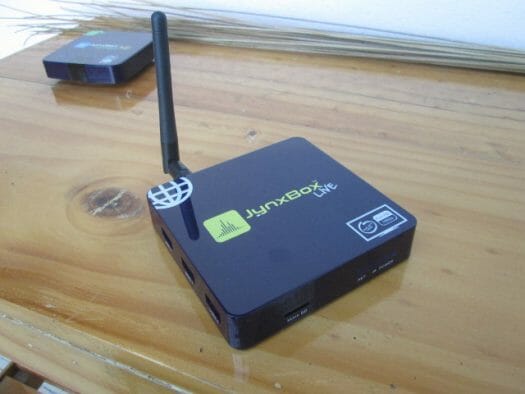 From the outside, Jynxbox Live looks very much like any other Android TV box, with HDMI, Ethernet, S/PDIF, three USB ports, a micro SD slot, a few LEDs, and a Wi-Fi antenna. To get started I’ve connected the provided HDMI cable to the box and my TV, as well as an Ethernet cable, before powering up the device with the USB power supply. After a few seconds wait, you’ll get the Windows 8 Metro like interface shown below. 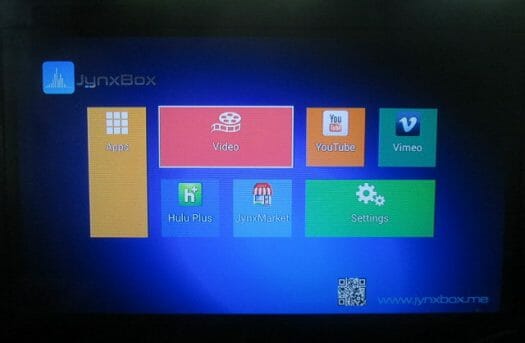 YouTube, Hulu Plus, Vimeo are pre-installed, and about 20 extra apps such as Netflix, ShadowGun are available via JynxMarket. The Video icons let you play files from a micro SD card, or USB drive, and the Settings menu takes you to the standard Android Settings. In the “About device” section, the box is called Jynxbox_LiveV2, and runs Android 4.2.2.

In the unboxing post, you’ll have noticed a remote control with many buttons such as PVR, DVR info, VOD, Record. etc…, but these are not used at all with this system.

The pre-installed fimware does not justify the $350 price tag at all, but Jynxbox Live manufacturer must have seen Simple.TV DVR selling for $400 by legally providing lifetime live TV via ATSC/Cable tuners as well as recording services, and decided they could just do something similar by providing a Live TV app / crack? to provide Internet based Live TV for $350. However, I’m doubtful of the legality of the whole thing, maybe not for all channels, but at least a few of them.

For review purpose, I tried to install the Live TV app, and it replaced the Video icon, by Live TV, but I can only access 10 channels, and none of them will stream. I also get a message saying “download file failed” when I start the live TV app. I’m guessing the URL may be blocked where I live, as it’s working for other people.

You can have a look at Jynxbox Live device, its user interface, and available apps in the short video below.

If you want to learn more about Live TV app, you can watch the video showing how to install Live TV, and read some impressions from DDSPROS forums. According to one user from this forum nearly 300 channels are currently available:

Theather In a Box provided Jynxbox Live for review.

The fundamental questions here are:
1) video quality (720p, 1080p,??)
2) channel stability (slow to load, hangs on play, etc)
3) future channel availability
If all answers are positive, then the $350 buying price is very cheap!

U get everything depends on the country as well@Jota